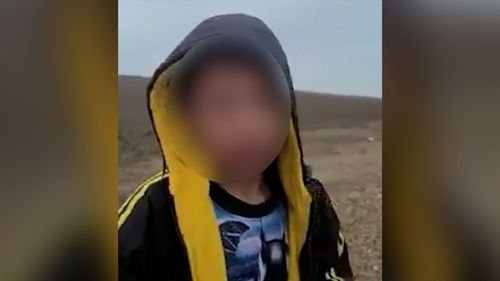 A 10-year-old boy found walking alone in tears near the US-Mexico border had previously been expelled from the US with his mother under a Trump-era pandemic health order that allows for the swift removal of migrants, according to a Customs and Border Protection official.

The child, identified as Wilton Gutiérrez of Nicaragua, had been traveling with his mother when they were apprehended in the El Paso, Texas, region on March 8, the official told CNN. They were expelled from El Paso to Mexico under the health order known as “Title 42,” the official added.

The official spoke on the condition of anonymity because he wasn’t authorized to talk to media.

The Washington Post first reported that the child and his mother had been expelled to Mexico.

On April 1, Wilton was found by US Border Patrol in the Rio Grande Valley region of Texas without his mother after a farmer spotted him and alerted authorities. “Can you help me?” the boy asked a Border Patrol agent in a video shared with CNN to underscore concerns over the danger associated with the increase in unaccompanied children at the border.

Monday marked the first time a US official has acknowledged the expulsion to CNN and provided the date that Wilton and his mother had first been apprehended on the border. In Miami, the boy’s uncle Misael Obregón said in an interview with Univision last week that the minor and his mother had come to the US to request asylum but US authorities did not allow her to stay in the country.

The Biden administration has continued to lean on the Trump-era health order to quickly expel migrants amid the pandemic, with an exception for unaccompanied children, who are allowed to stay in the US for their immigration proceedings.

CNN reported last week that “more and more” migrant families are “self-separating” in Mexico, sending children alone to cross into the United States after first having been expelled, according to the US Border Patrol’s chief patrol agent of the Rio Grande Valley sector, Brian Hastings — though that may not be the case here.

While the full circumstances of Wilton’s journey were not immediately known, his back-and-forth shows the perils of a program meant to prevent further spread of Covid-19 in the US and highlights the potential unintended consequences of it.

After he was picked up by Border Patrol, the child spent around a week in CBP custody, beyond the 72-hour legal limit, and then was transferred to Health and Human Services care on April 8, according to the official.

A spokesperson for HHS said, as a matter of policy, the department does not identify individual unaccompanied children and will not comment on specific cases. A CBP spokesperson did not have an update on the child’s whereabouts or expulsion.

The average time in CBP custody for unaccompanied children in the Rio Grande Valley is around seven days, the official said, adding that some children have been held for up to 21 days.

As of Monday, there were 2,200 children in CBP custody in the south Texas region, which is ground zero for Border Patrol apprehensions and has struggled with the overwhelming number of children crossing the border.

Over the weekend, the Rio Grande Valley sector made some progress, transferring around 1,000 children from CBP to HHS custody, the official said.

HHS is “starting to move quicker as they get the additional facilities up and running,” the official said.

The number of unaccompanied minors in CBP custody has dropped 45%, according to the latest government data, amid an ongoing effort by the Biden administration to find suitable spaces to accommodate them after facing scrutiny for overcrowded facilities.

Nicaragua said it had located the child’s father in the municipality of Muelle de los Bueyes, CNN reported Saturday. He was identified as Lázaro Gutiérrez Laguna, a 35-year-old farmer.

The father added that on April 7 he learned through the news that his son had been found by a US border agent.