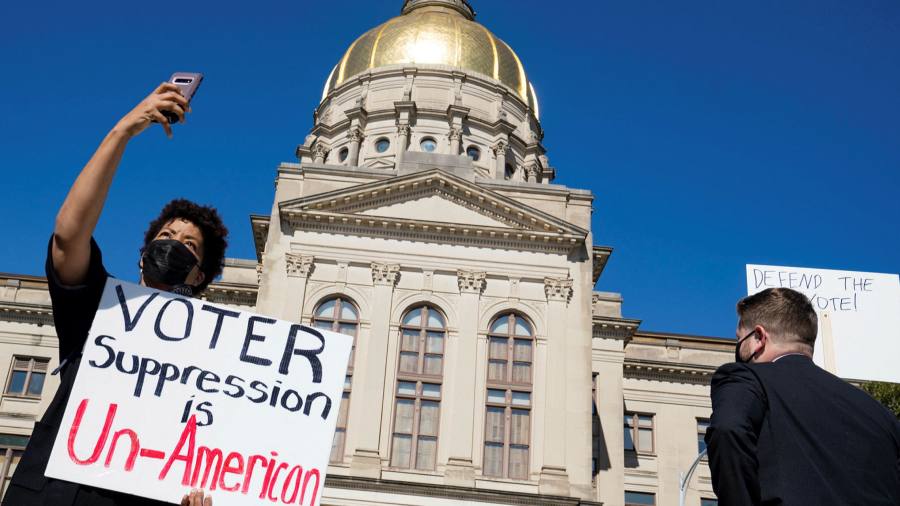 A schism has opened up between the Republican party and US business. It began last month when Coca-Cola, Delta Air Lines and other large companies condemned a Republican sponsored law that would restrict voting in Georgia. American Airlines and Dell then objected to a similar proposed law in Texas. Mitch McConnell, Republican senate leader, warned the companies to “stay out of politics”. Marco Rubio called them “woke corporate hypocrites”.

These attacks are surprising, to say the least. US business and national Republican leadership, who often share a belief in low taxes and limited regulation, have supported each other for decades. In fact, research shows that around 60 per cent of US chief executives who make political donations do so to Republican candidates. Even so, Republicans’ bitter backlash to corporate criticism about these laws shows a deep misunderstanding of modern companies and what makes them tick.

The facts of both laws are that they would make voting access harder — in Georgia’s case by cutting the number of days to request an absentee ballot, requiring state IDs to submit them, shrinking the number of ballot drop boxes and banning mobile voting. That Texas will gain two congressional seats following the 2020 census only increases its law’s potential significance. Their restrictions have outraged civil rights leaders and prompted Coca-Cola’s CEO to call the Georgia law “wrong” and Delta Air Lines’ CEO to say it is “based on a lie”.

To claim, as some conservatives have, that it is nonsensical for companies to oppose the law as it does not affect them is incorrect. Nor is it true that, by condemning it, companies have allied with the Democrats and thus acted against their own profitmaking interests and shareholders.

Why? The simple reason is that companies’ employees and consumers have changed. The millennial generation, those between 25 and 40 years old today, is the largest group in both categories. Numerous surveys also show that millennials have more progressive and active views on racial and political issues than previous generations, such as baby boomers or Generation X. Unless millennials’ views change, the companies’ positions won’t either.

Let’s quantify this shift in attitudes. According to the US census, millennials became the largest living generation in 2019. By 2050, according to the Pew Research Center, there will be about 25m more millennials than any predecessor generation. Already today, millennials account for 35 per cent of the US labour force; by 2029, they are projected to account for as much as 75 per cent of the global labour force. Much the same dynamic applies to consumers. Millennial consumers spend close to $400bn every year, Epsilon estimates.

Some of the strongest characteristics of millennials are that they tend to be more racially diverse, more convinced of racial discrimination and more inclined to back Democrats. According to Pew, they are 43 per cent non-white and “stand out for . . . [their] liberal views.” In a 2018 survey, 52 per cent of millennials said racism was the main reason black people could not get ahead, while 79 per cent believed immigration strengthened the country.

The point here is that many of Coca-Cola’s and other companies’ employees would object if they stayed silent about the highly-publicised Georgia law. Any company seen as actually being supportive of it could also suffer employee defections. I see a similar dynamic among our own employees around the country, most of whom are millennials. They are more active and vocal than my generation was at their age; we weren’t even close. Neither we nor any of these protesting companies can afford employee instability and losses. That is why this law affects companies directly.

The split between Republicans and business has been brewing for years as Donald Trump and his followers have changed the party. Only four months ago, most Republican lawmakers stated their belief that the 2020 election was stolen. Apparently, they were unwilling to contradict those Trump supporters who believed this falsehood. They are also the most reliable Republican voters and want these new voter restrictions.

However, modern corporations operate in an empirical world and cannot endorse such illusions. Moreover, their employees and customers would not allow them to accept new voting restrictions in order to combat imaginary electoral fraud. Unless the Republican party can return to fact-based priorities like inclusion, its separation from the business community will only grow.

Tech Tracker rounds up what’s happening in the technology sector of the restaurant industry, including news from restaurants, vendors, digital … END_OF_DOCUMENT_TOKEN_TO_BE_REPLACED