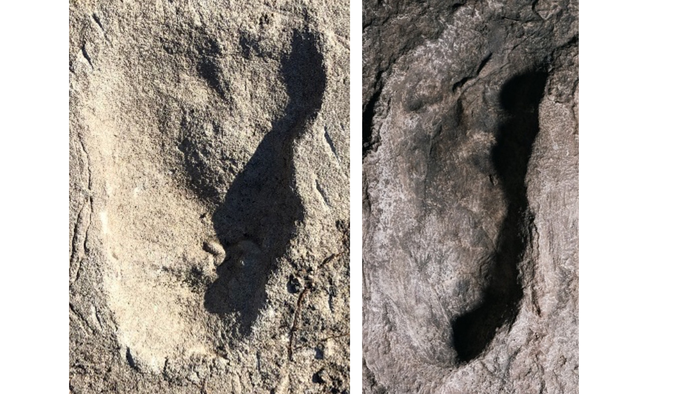 The footprints from site A (left) look similar to those excavated from site G (right), but they are much wider.
Jeremy DeSilva (left), Eli Burakian/Dartmouth (right)

In the 1970s, a set of 3.66-million-year-old human footprints preserved in volcanic ash turned the paleontology field upside down. They belonged to Australopithacus afarensis—the same species as Lucy, the famous ancient hominin—and provided the first concrete evidence that human ancestors walked on two feet, Maya Wei-Haas reports for National Geographic.

But a new study suggests that A. afarensis may not have been the only bipedal hominin traversing eastern Africa at the time. A. afarensis’ footprints were found in an area known as Laetoli site G in northern Tanzania. But just a mile away in site A, scientists unearthed another set of ancient prints from the same time. They assumed the tracks belonged to a young bear, since they were so different from those of A. afarensis’, and largely ignored them, Katie Hunt reports for CNN.

Now, more than 40 years after the tracks were originally discovered, new research suggests that the footprints may have belonged to another hominin species—likely still in the Australopithacus genus—that walked the Earth around the same time as Lucy’s species, Bruce Bower reports for Science News. The team published their findings this week in the journal Nature.

“It’s really cool that we may have two hominin species, at least, living at the same place,” lead author Ellison McNutt, a biological anthropologist at Ohio University’s Heritage College of Osteopathic Medicine, tells Nell Greenfieldboyce for NPR. This species, she says, could have “looked up across the landscape and saw an Australopithecus afarensis walking somewhere else.”

The original bear hypothesis may sound far-fetched now, but it “was very reasonable at the time” because the tracks looked so unusual, McNutt tells Michael Marshall for New Scientist.

To identify these tracks, the team compared them with prints from humans, chimpanzees and American black bears since bears lived in Africa at the time. Plus, they walk bipedally, and their hind paws can look strangely human-like. But when the team compared the bears’ new footprints with the ancient ones, they were too different, NPR reports.

“The soil was hard as cement and it took a hammer and chisel to reach the footprint layer, which we then needed to excavate delicately with a hard-bristled brush and tongue depressor,” co-author Jeremy DeSilva, a paleoanthropologist at Dartmouth College, tells CNN. “Fortunately, the footprints were beautifully preserved.”

Using high-tech imaging technology, the team meticulously documented the excavated tracks and compared them to other known footprints, but this set had specific characteristics. For example, the big toe was larger than its second, which is found in human ancestors and not bears, New Scientist reports.

Plus, the new hominin suspect had more chimp-like feet instead of resembling humans or A. afarensis. The position of the tracks also indicates good balance and a cross-step, meaning that the individual crossed one foot over the midline of its body, like an over-the-top supermodel walking down the runway. Chimps and bears lack the anatomy and balance to do that, ruling them out again, Science News reports.

“There were at least two hominins, walking in different ways, on differently shaped feet, at this time in our evolutionary history, showing that the acquisition of human-like walking was less linear than many imagine,” DeSilva tells CNN.

Scientists previously believed that bipedalism had one evolutionary origin—a pinpointed spot in the human timeline—but “scientists have slowly realized there’s more than one way to be bipedal,” Wei-Haas writes for National Geographic.

However, some scientists aren’t as confident that the prints belonged to another hominin species. They say there isn’t enough evidence yet to confirm—only so much information can be deduced from a small collection of prints. If confirmed in further research, these footprints and who they belonged to could challenge what scientists know about how bipedalism arose in the human evolutionary tree, National Geographic reports.

The North Idaho Sports Commission would like to thank the City of Coeur d’Alene for supporting a successful IRONMAN 70.3. Highlights included: 539 … END_OF_DOCUMENT_TOKEN_TO_BE_REPLACED

A democracy came under attack. The United States saw a threat to an ally and also to the entire world order, but it feared that sending troops could … END_OF_DOCUMENT_TOKEN_TO_BE_REPLACED