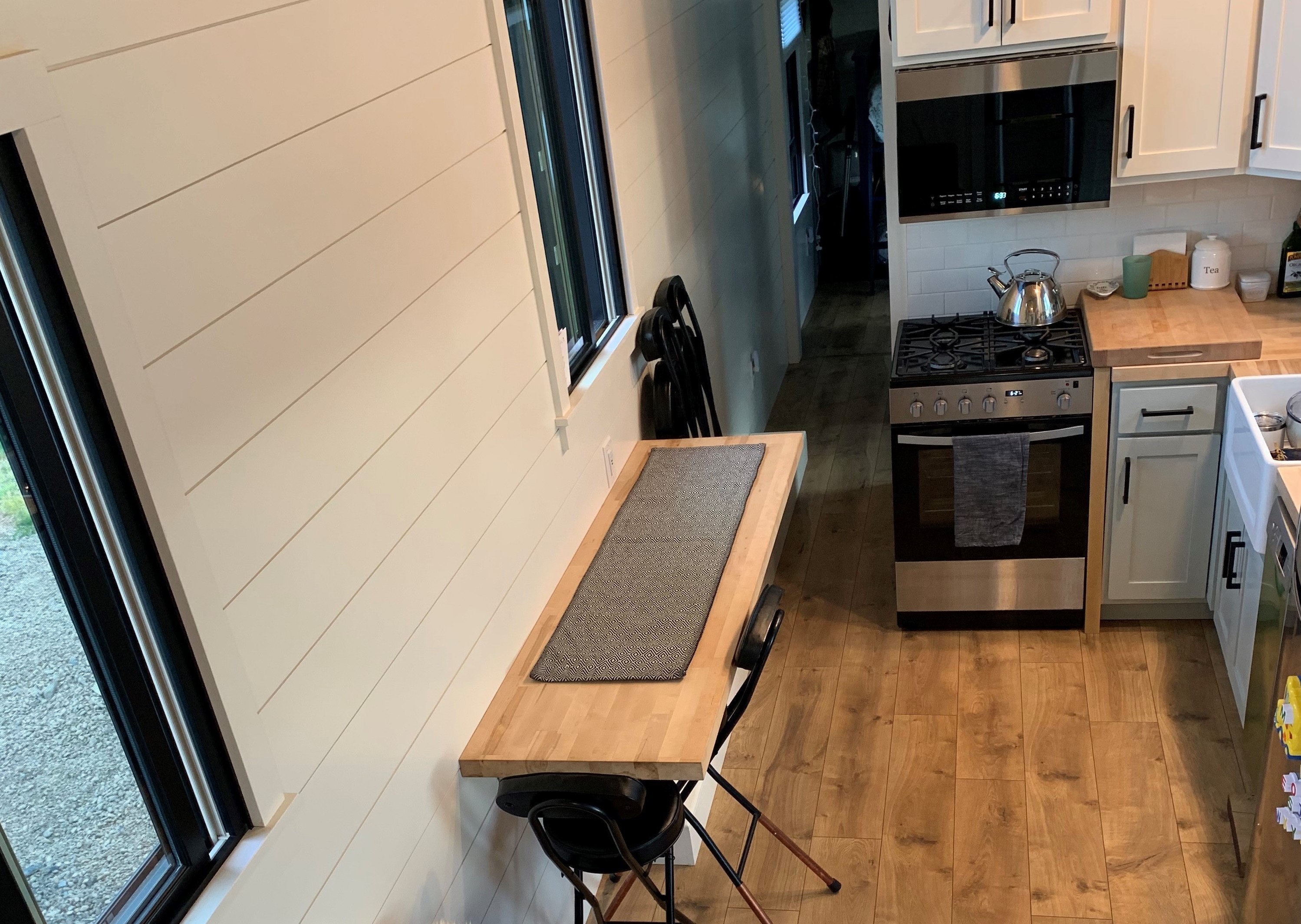 Mary Kate Taliafarro, along with her husband and three children, have been living in a 350-square-foot “tiny house” in Ulster County, New York, since March 2021. Last year, they decided to ride the real estate wave and sell their large, two-story home in the Hudson Valley and live in the tiny home while having a new home built on nearby property.

Although squeezing an entire family into small living quarters may seem like a recipe for chaos, Taliafarro told The Epoch Times that downsizing has definitely had its upside.

“It’s been great—actually a lot better than I expected,” she said.

“My two boys just love it,” she said. The family’s newest addition, her four-month old daughter, has not weighed in yet.

Because of their growing family, the Taliafarros are planning an addition to the tiny house that will afford them a master bedroom, bath, and a just a bit more living space.

Interior of a tiny home in Ulster County, New York, owned by the Taliafarro family. (Courtesy of MaryKate Taliafarro)

“Right now, the house is on my husband’s family’s organic produce farm, so the kids have the farm as their playground,” she said.  The electrical system even provides air-conditioning in the summer and heat in the winter, including radiant floor heating.

“We have already saved on utilities, and we’re very lucky to be living in such beautiful surroundings,” she said. Taliafarro, a teacher, did her research before jumping head first into a tiny home.

“You have to know exactly what you want so that you can work with the builder to accommodate your needs. Something as simple as a water heater can be a problem if that space isn’t big enough to accommodate what you need.”

Taliafarro and her husband, owner of tree service firm, did end up putting a lot of household items into storage for the time being. “You have to determine what you need every day, and things like holiday decorations or seasonal clothes can go to storage,” she said.  In fact, I haven’t seen my patio furniture in almost two years!”

Their home was designed with extra drawer space under the beds, as well as above the bathroom. The kitchen shelves are built up to the ceiling, and the children’s books and toys are rotated in and out of storage.

The family plans to continue living in the tiny home until their “dream home” is built, and then they’ll rent out the tiny house. “In the meantime, we’ve learned to simplify life, and it forces you to not buy things, so you save money that way as well.”

Interior of a tiny home in Ulster County, New York, owned by the Taliafarro family. (Courtesy of MaryKate Taliafarro)

A recent Home Advisory survey of 1,800 Americans found that 86 percent would live in a tiny home, and 79 percent would put one on their property. Some 68 percent of those surveyed would consider buying a tiny home as their first home, and 40 percent disclosed their budget would be between $50,000 to $99,000.

Home Advisor, a digital marketplace connecting homeowners with local service professionals, defines the typical tiny home as one that is less than 600 square feet. Some of them are built on trailers so that owners can move them easily. Tiny homes come in all styles, including cabins, mobile homes, bus conversions, and even refurbished shipping containers.

Mischa Fisher, chief economist at Angi, the parent company of Home Advisor, explained that tiny homes started to become popular after the recession of 2008–09, when homes across the country lost a significant amount of their value. “Millions of homeowners lost their houses due to foreclosure, and millennials entered the job market facing grim prospects,” he told The Epoch Times. “Tiny homes were appealing as a less expensive, more accessible option for people who couldn’t find or afford traditional homes.”

The majority of those surveyed said they would need one bedroom and one bathroom, while three in four shared that they’d live with two or fewer people. Among the most appealing aspects reported on tiny home living were affordability, efficiency, eco-friendliness, a minimalist lifestyle, and a downsized lifestyle. When it came to the most popular places for tiny homes, survey respondents named a plot of land they own, a dedicated tiny home community, and their yard. 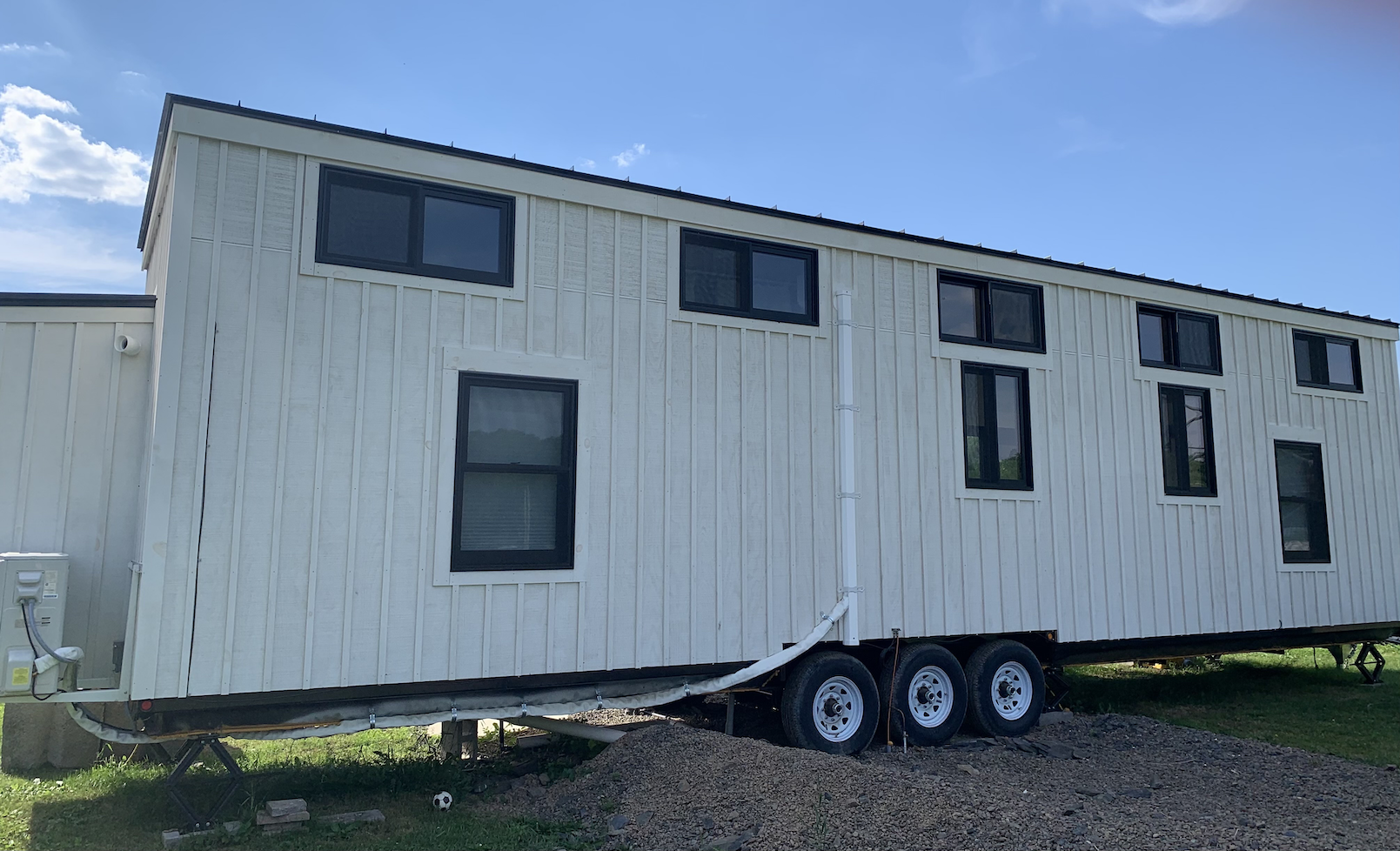 Among states, California ranked first, with six of the top 10 either along the West Coast or in the Rocky Mountain states. The Golden State was followed by Florida, Colorado, Texas, and Oregon in the top five. Rounding out the top 10, in order, were Washington State, Arizona, North Carolina, New York, and Utah. 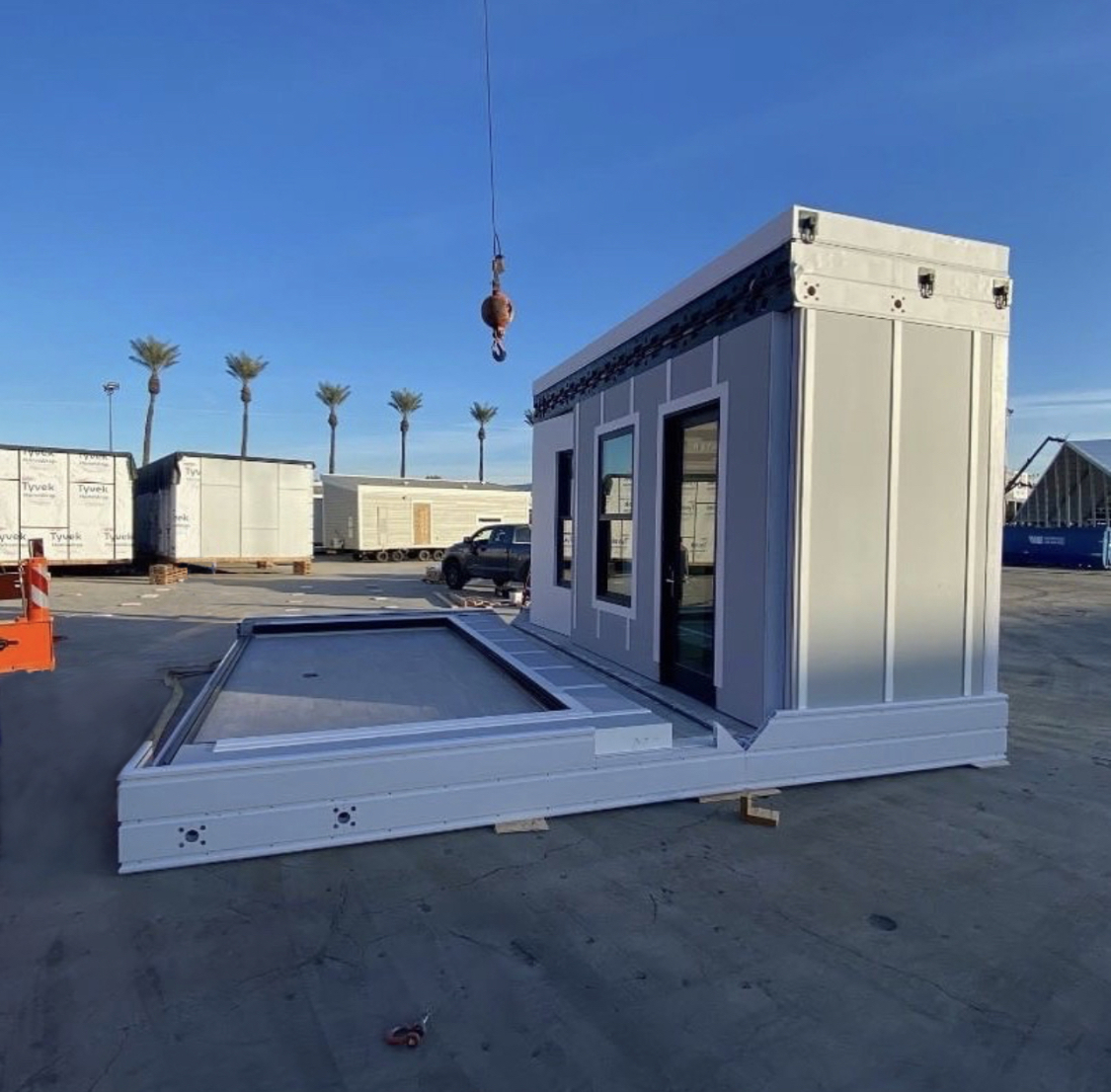 A tiny folding house made by Boxabl. (Courtesy of Boxabl)

One unique tiny-house manufacturer, Boxabl, in Las Vegas, has actually created a “foldable” home that can be shipped and then “unfolded” at the buyer’s location in less than an hour. Boxabl has been in business since 2017, and finished constructing its first factory last year.  Its second factory is expected to be up and running by the end of the year.

“There’s a huge need for affordable housing all over the country, and so far, we have fulfilled our first order of 156 units for the U.S. government,” David Thompson, Boxabl social media manager, told The Epoch Times. “To date, we have 120,000 reservations for orders that we plan on fulfilling in 2023 and 2024.”

Currently, each 375-square-foot casita sells for $50,000 and offers a full-size kitchen with all appliances, a bathroom with a toilet, shower and sink, a living room, bedroom, plus a washer and dryer.  Heating and air conditioning are also included. “All the buyers need do is supply the land, arrange for utility hookups, and purchase living room and bedroom furniture,” explained Thompson.

Described as real-life LEGOS, Boxabl’s casitas are also water-, fire-, mold-, and bug-resistant. “People have never seen anything like this before, and there’s a major ‘wow’ factor when the see the casita unfold,” he added. “It definitely helps to solve the affordable housing crisis and gives people the opportunity to finally own a home.”

As for the future of tiny homes, Fisher believes they’re not just a trend but also are likely to remain a fixture in the housing market. “The biggest value in tiny homes comes from serving as an accessory dwelling unit in a high cost-of-living area, an in-law suite for aging parents, or as a wilderness escape on a cheap piece of vacation land,” he said. “But for the foreseeable future, it’s my bet that most Americans will still likely continue to desire larger homes as their primary residences.”

Mary T. Prenon covers real estate and business. She has been a writer and reporter for over 25 years with various print and broadcast media in New York.