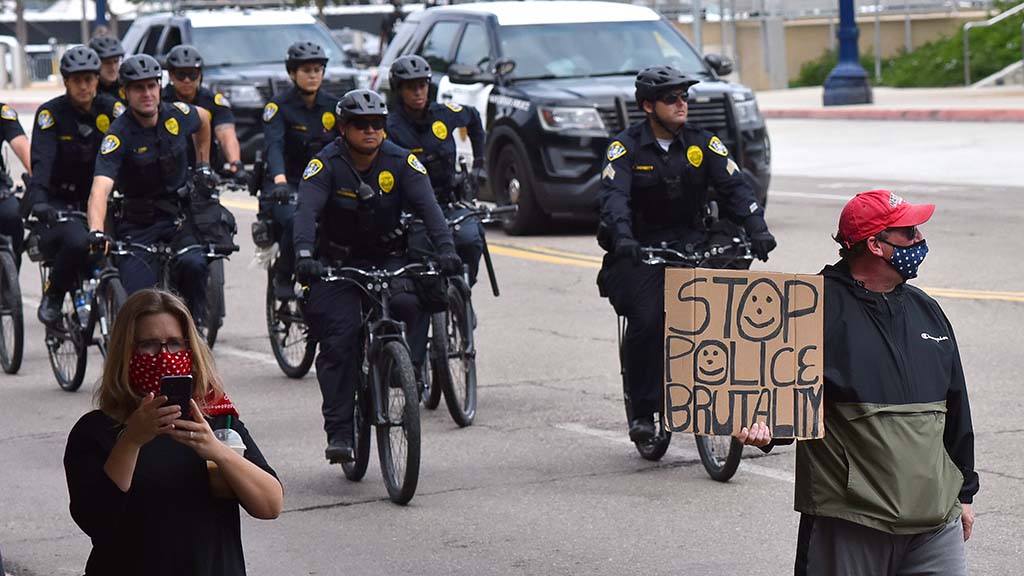 A protester holds up a sign as San Diego police officers follow a march on bicycles in June 2020. Photo by Chris Stone

The man on the other end of the phone is asking for money for the protection of police officers.  It wasn’t the usual automated call, and hearing a human voice kept me on the line.

The caller said he was phoning on behalf of the Committee for Police Officers’ Defense.  Multiple voices could be heard in the background. It sounded like the solicitor was calling from a “boiler room,” where individuals dial from a list of working phone numbers. In this case, the pitch was for money for “helping police officers in the continuing war against cops.”

As our conversation continued, the caller would lower the amount of funding he was requesting. He initially solicited $95 and eventually said he would accept a $15 contribution as an offer of “’goodwill’ on my part. This would allow me a chance to  “talk to your wife” about considering further contributions.

In researching the organizations, I discovered numerous similar-sounding names for PACs raising funds for police officers. The Police Officers Defense Alliance, for example, raised $3.2 million in 2020, and The American Police Officers Alliance raised $4.3 million. The source of the funding information was OpenSecrets, a database that tracks spending in U.S. politics run by the Center for Responsive Politics.

Each organization says it is spending money for police officers being abused and unfairly targeted. This comes at a time when some community activists have been calling for “defunding” the police.

Virginia incorporation papers show James Fortis is president of the Alliance and changed the name to the Defense Coalition. It appears there are a number of nonprofits up and running under the apparent control of Fortis.

Also worth noting is that while his organization is based in Virginia, and gets its mail in Stafford, TX, Fortis lives in Lake Worth, FL. The websites describe his career in law enforcement and his role as  the creator of the “police officers safety act” legislation carried by former San Diego Congressman Randy “Duke” Cunningham.

One of Fortis’ websites solicits money for individuals who were “guilty of a crime for doing their job the way they were trained to do it.” As an example, he cites former Sheriff Joe Arpaio of Maricopa County in Arizona.  President Trump pardoned the sheriff even after the Department of Justice described Arpaio as being responsible for the worst case of racial profiling in U.S. history.

The website soliciting funds for Arpaio says, “Liberals have targeted Sheriff Joe Arpaio with a multi-million dollar lawsuit (that could even result in jail time) because he was upholding the law of the land.”

Three calls to his Virginia office for comment have gone unanswered as well as an email sent directly to his address listed in his filings with California.

For anyone interested in supporting law enforcement, experts say, think local. Don’t send your money to a national group collecting for causes that may not always be clear.  If they are PACs, the fundraising effort is politically motivated and won’t necessarily support San Diego-area officers or deputies or their families.

JW August is a San Diego-based broadcast and digital journalist.

Insiders who purchased US$162k worth of Compass, Inc. (NYSE:COMP) shares over the past year recouped some of their losses after price gained 14% last … END_OF_DOCUMENT_TOKEN_TO_BE_REPLACED