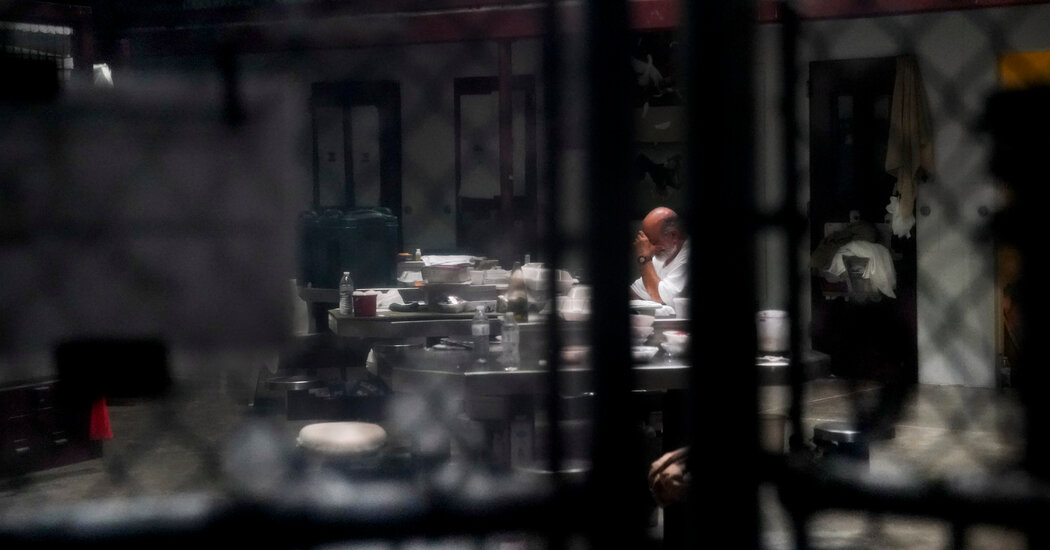 WASHINGTON — The Biden administration pulled back on Friday from a Trump-era claim that detainees at the Guantánamo Bay wartime prison in Cuba have no due process rights under the Constitution. But it stopped short of declaring that noncitizens held at the American naval base in Cuba are covered by such legal protections, according to officials familiar with the matter.

Instead, in a much-anticipated brief before the full Court of Appeals for the District of Columbia Circuit, the Justice Department took no position on the question of whether Guantánamo detainees have any due process rights. The muddled outcome followed a sharp internal debate among the Biden legal team.

The brief was filed under seal because it contained classified information about the detainee at the center of the case, a 53-year-old Yemeni man, Abdulsalam al-Hela, who has been held without charge or trial at the wartime prison since 2004. But while it was not immediately available for public viewing, officials described its views — or lack thereof — on due process.

The question of whether the Constitution’s guarantee that the government cannot deprive people of “life, liberty or property, without due process of law” applies to non-American detainees held at Guantánamo has been raised since the George W. Bush administration first brought wartime prisoners there for indefinite detention without trial in 2002. It has never been resolved.

While it is not always clear what process is “due,” a precedent establishing that the clause covers such detainees would give them a greater basis to ask a court to scrutinize how the government is treating them across matters including their continued detention, their medical treatment and whether evidence derived from torture may be used against them.

It remains unclear what the full Court of Appeals for the District of Columbia will say. During the Trump administration, the Justice Department had argued that Mr. Hela had no due process rights, and a conservative-tilted appeals court panel used the case to declare that the due process clause does not apply to any detainee. But the full court, which is controlled by more liberal-leaning judges, decided to vacate that ruling and rehear the matter.

The government’s position that Mr. Hela is lawfully detainable did not change. The brief is said to assert that he meets the criteria to be held as a wartime prisoner regardless of whether the due process clause covers him. Moreover, last month, a six-agency parole-like board recommended his transfer if a country can be found to resettle him, with his wife, in a secure arrangement.

According to people familiar with internal deliberations, some officials at the Justice Department — where career government lawyers have spent years under administrations of both parties defending Guantánamo detention policies in court — resisted changing the Trump-era position because that could make it harder to win such cases.

But other officials contend that it would clash with the Biden administration’s values not to clearly say that detainees have due process rights. Lawyers for the Pentagon and the State Department are said to have pressed to declare that the clause protects detainees in the context of habeas corpus proceedings — while also saying that the standard had been met.

And lawyers for intelligence agencies are said to have taken the less forceful position that they would not object to a brief narrowly saying detainees have due process rights in that context, while leaving other contexts — like military commissions and medical issues — unaddressed.

The officials familiar with internal deliberations spoke on the condition of anonymity, but word of the disagreement began to filter out this week. On Wednesday, Senator Richard J. Durbin of Illinois, the chairman of the Judiciary Committee and Democrats’ No. 2 leader in the chamber — sent a letter to Attorney General Merrick B. Garland urging him to direct the department to say that detainees have such rights.

Mr. Garland, however, was said to have recused himself from playing any role in the litigation. He was until recently a judge on the Court of Appeals for the District of Columbia Circuit and participated in cases involving Guantánamo detainees. Elizabeth B. Prelogar, the acting solicitor general, oversaw the interagency deliberations.

Insiders who purchased US$162k worth of Compass, Inc. (NYSE:COMP) shares over the past year recouped some of their losses after price gained 14% last … END_OF_DOCUMENT_TOKEN_TO_BE_REPLACED