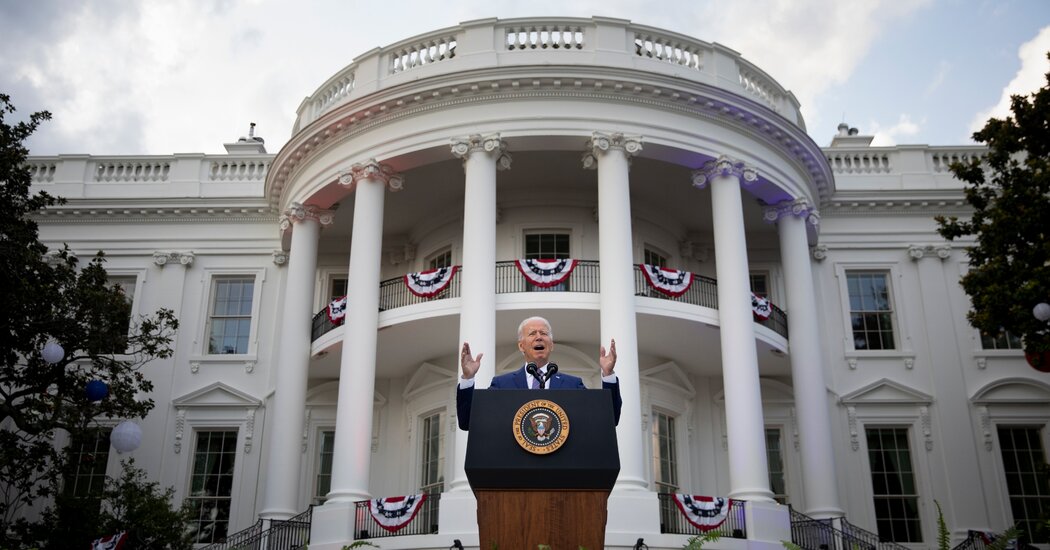 WASHINGTON — On the day that President Biden had long anticipated as a milestone in the fight against the coronavirus, the White House hosted a celebration to both commemorate the July 4 holiday and herald the administration’s progress toward overcoming the pandemic.

In bringing together some 1,000 people for the largest planned event of Mr. Biden’s presidency, the White House has been forced to walk a fine line, striving to signal progress toward restoring normalcy while still acknowledging the dangers of a pandemic that continues to claim hundreds of lives a day.

The president continued that strategy on Sunday, comparing the nation’s fight for independence with the battle against the coronavirus.

For months, the White House had July 4 circled as a breakthrough moment in the pandemic, the point at which many restrictions could be lifted if the country met ambitious vaccination targets.

In the months after his election, Mr. Biden offered only guarded hope that small groups would be able to gather by the holiday weekend while still observing familiar safety guidance.

But as vaccination rates climbed steadily throughout the spring, the White House grew more confident, describing the holiday as the beginning of a “summer of freedom” and the event on Sunday as a celebration not only of Independence Day but also of “independence from Covid-19.”

In addition to Mr. Biden’s speech, the celebration included a barbecue honoring attendees — a group of first responders, essential workers and service members, nearly all of whom were vaccinated and able to go without masks in accordance with guidance released by the Centers for Disease Control and Prevention in May. Guests mingled on the South Lawn, enjoying pulled pork and chicken while a live band played throughout the evening.

In his remarks, the president reflected on the more than 600,000 Americans who have died from the virus over the past 16 months.

“This day falls hard on all those who’ve lost a loved one,” Mr. Biden said. “Each day, I carry a card in my pocket with my schedule on it. On the back of that schedule, on that card, I have the number of Americans who’ve lost their lives to Covid.”

But the president also addressed the present, imploring unvaccinated Americans to get shots. “It’s the most patriotic thing you can do,” he said.

Mr. Biden expressed gratitude to the essential workers and military families whose work throughout the pandemic has helped bring new cases and deaths down by more than 90 percent from their peak in January. They “became the light to see us through the darkness,” he said.

Still, the Biden administration has been forced to concede in recent weeks that many challenges lie ahead, and the president was careful to remind the crowd several times of the threat the pandemic still poses.

While the White House once targeted July 4 as the date that at least 70 percent of adults would be at least partly vaccinated, officials acknowledged last month that they would almost certainly miss that goal as the vaccination rate has plummeted from a peak in April.

And while 20 states, Washington, D.C., and two territories exceeded the 70 percent mark last week, the country’s progress as a whole has slowed significantly, with only about one million doses now being administered each week on average. On Sunday, roughly 67 percent of adults had received at least one shot, according to data compiled by The New York Times.

The rapid spread of the highly contagious Delta variant has also raised concerns among public health officials, who fear that new outbreaks could occur in parts of the country where vaccination rates have stayed comparatively low, and that the variant could mutate in ways that leave even vaccinated Americans vulnerable.

While the pageantry at the White House presented a display of normality that seemed far from likely at the beginning of Mr. Biden’s term, the occasion was characterized by a sense of restraint rarely seen under the previous administration.

Even as new cases swelled toward a summer peak last year, President Donald J. Trump went ahead with a 35-minute fireworks display and military flyovers on the National Mall, against the wishes of Mayor Muriel E. Bowser of Washington, who urged people not to attend. The fireworks show this year will be only half as long, and Ms. Bowser, encouraged by progress on vaccines, has welcomed guests back to the city.

Under Mr. Trump, the White House hosted other large gatherings long before vaccines had been approved, including two celebrating the nomination and confirmation of Justice Amy Coney Barrett, in which he and several other attendees were believed to have been exposed and infected.

For Mr. Biden, the celebrations this year appeared choreographed to signal that Americans could enjoy some degree of normality in coming together, even as he and his own public health officials have continued to stress the importance of maintaining momentum on vaccines.

In the days leading up to the event, the president was careful to reiterate that even amid the vaccination effort, the United States is still averaging hundreds of Covid-19 deaths each day. He urged Americans not to be complacent.

“I am not concerned there is going to be a major outbreak — in other words, that we’re going to have another epidemic nationwide,” Mr. Biden told reporters on Friday. “But I am concerned lives will be lost.”

But despite recent setbacks to his administration’s goals, the president appeared ready to embrace the moment.

“Today, while the virus has not been vanquished, we know this: It no longer controls our lives, it no longer paralyzes our nation,” Mr. Biden told the crowd on Sunday. “And it is within our power to make sure it never does again.”

Insiders who purchased US$162k worth of Compass, Inc. (NYSE:COMP) shares over the past year recouped some of their losses after price gained 14% last … END_OF_DOCUMENT_TOKEN_TO_BE_REPLACED