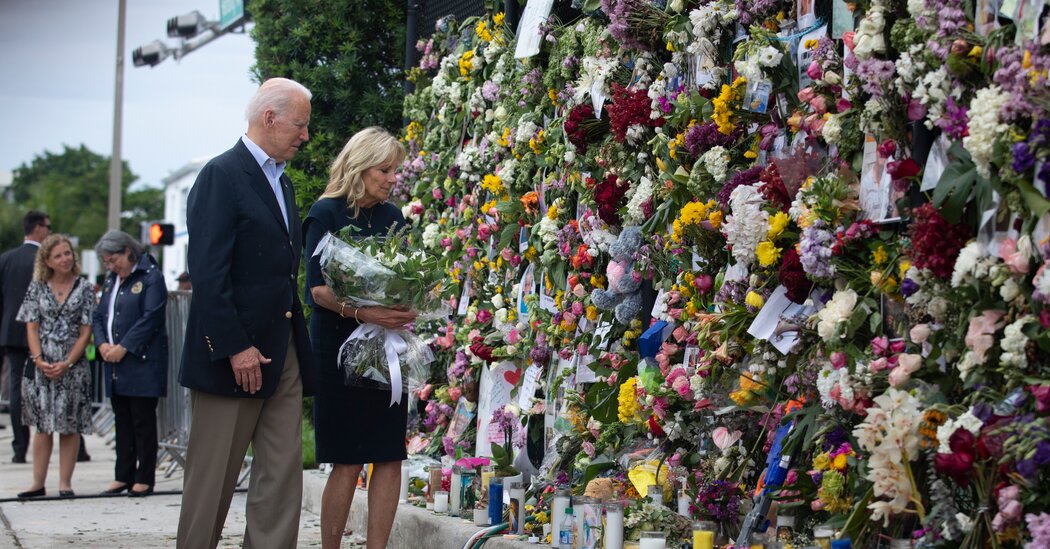 SURFSIDE, Fla. — President Biden spent three hours Thursday consoling the families of those who died or were still missing under the rubble of a collapsed condominium building near Miami Beach, saying “the waiting is unbearable” for agonized relatives as crews halted a desperate search for much of the day out of concern that the rest of the complex could also fall.

In remarks after the private meeting, which was held in a hotel ballroom, Mr. Biden said the families were “going through hell.” Many have been waiting for more than a week for word about whether anyone might still be alive under the concrete and steel.

“I sat with one woman who had just lost her husband and her little baby boy, didn’t know what to do,” the president said. “I sat with another family that lost almost the entire family, cousins, brothers, sisters. And to watch them, and they’re praying and pleading and God let there be a miracle.”

For Mr. Biden, confronting the largest national tragedy since he took office was complicated by the fact that he could not eulogize those who were still unaccounted for, or hold out much hope for the missing. “They know that the chances are, as each day goes by, diminished slightly,” the president said. “But at a minimum, at a minimum, they want to recover the bodies. They want to recover the bodies.”

Eighteen people are known to have died in the collapse of Champlain Towers South, and as many as 145 people remain missing, numbers th­at have remained unchanged since Wednesday.

Mr. Biden said that many of the family members asked what he called “basic heart-wrenching” questions: Would they be able to recover the bodies of their loved ones so they could bury them? If not, what should they do?

He added that the families understood the decision to pause the search on Thursday, given the risks to the rescue teams.

The president arrived in Florida hours after rescue workers were pulled off the debris pile amid concern that the rest of the building might fall. Although the search resumed hours later, the delay was another setback for a search that for days had proceeded slowly and without hopeful news.

“They’re working in a very, very unsafe environment,” said Alan R. Cominsky, the chief of Miami-Dade Fire Rescue, who described a large hanging column that threatened to destabilize the remaining structure, as well as movement in concrete slabs and the debris pile, that prompted the pause in rescue work. “I couldn’t pinpoint it to one specific incident.”

The northeast portion of the building, facing the beach, fell to the ground last week, while other units were left standing. But after days of intensive searches, the scene appeared quiet for much of Thursday, with cranes frozen above the rubble.

Miami-Dade Fire Rescue officials said on Twitter that the decision to resume searching was made after consulting with structural engineers. Rescue workers returned to the debris pile at about 4:45 p.m., Mayor Daniella Levine Cava of Miami-Dade County said.

“Finding missing loved ones continues to be at the forefront of our operations,” the fire department’s post said. Local officials are also monitoring the approach of Tropical Storm Elsa, even as they cautioned its path was still unclear.

Even before the pause, the search had progressed slowly. The bodies of two sisters were pulled from the rubble on Wednesday as the death toll rose to 18. Lucia Guara, 10, and her sister, Emma Guara, 4, were among four victims the authorities identified Wednesday evening, along with their mother, Anaely Rodriguez, 42. Rescue workers also found the body of Andreas Giannitsopoulos, 21. On Thursday evening, the authorities announced the identification of another victim recovered on Wednesday, Magaly Elena Delgado, 80.

The president praised emergency workers and local and state officials, saying that their cooperation was remarkable — and he used the moment to celebrate a rare instance of bipartisanship. Mr. Biden praised Florida’s governor, Ron DeSantis, one of his harshest critics. Mr. DeSantis returned the compliment, saying that Mr. Biden had “recognized the severity of this tragedy from Day 1.” Mr. Biden said the federal government would cover the entire cost of the first 30 days of the recovery.

He said he had told the families that “we’re here for you as one nation.” Later, he and the first lady, Jill Biden, went to a memorial wall and looked at pictures of some of the victims and notes left for them — a scene reminiscent of New York nearly 20 years ago, after the Sept. 11, 2001, attacks brought down the World Trade Center. The makeshift memorial is near the collapse site, and the Bidens left a bouquet of white flowers, underneath a sign christening the memorial as the “Surfside Wall of Hope & Memorial.”

Battered by blistering heat and relentless storms, the memorial was adorned with flowers, missing-person posters, prayer candles and notes of encouragement for the families and rescue crews. Emergency medical workers have left toys and stuffed animals recovered from the site, still dusty from the rubble.

For Mr. Biden, the role as consoler is a familiar one. His successful campaign for the presidency was built in part on his ability to display an empathy for those suffering that often eluded President Donald J. Trump, especially in the middle of a pandemic that has claimed more than 600,000 American lives.

Although his session with family members was closed to the news media, a video of Mr. Biden, posted by one of the family members, appeared to show him discussing the grief he felt after his wife and daughter died in a car accident nearly a half-century ago.

“The waiting, the waiting, is unbearable,” he told the families, and he later said it reminded him of waiting to hear whether his sons would survive the accident.

Mr. Biden said he stayed in the room until everyone who wanted to talk with him had the opportunity.

Erick de Moura, a resident of the building who spent the night of the collapse at his girlfriend’s house, praised Mr. Biden as he and other survivors and victims’ families left the ballroom at the St. Regis Bal Harbour Resort.

“For him to take his time like he’s taking right now just walking around and talking to every single family, it’s just an amazing act and we appreciate it very much. It’s comforting for us,” Mr. de Moura said.

The president was joined by Senators Marco Rubio and Rick Scott, both Republicans. In addition to Mr. DeSantis, Lt. Gov. Jeanette Nuñez, Representative Debbie Wasserman Schultz, a Democrat, and Ms. Levine Cava were also in attendance.

The president also met with a group of emergency workers, including firefighters and search-and-rescue teams who had been working for the past week at the site of the disaster.

At a second memorial erected near a church, some onlookers gathered to pay their respects and watch the president’s motorcade pass. One woman painstakingly removed flowers, wilted with age and rainwater, from the chain link fence, tucking a fresh white rose in place next to laminated black-and-white photos of the missing and the deceased.

Wendy Marra, 38, who lives in the area, wiped away tears before tacking a piece of artwork to the fence.

“The whole world is here,” she said as she sat on the grass nearby, reflecting on the people she would see on food delivery runs or on beach walks and the building she used to stare at through her bedroom window.

“Biden just wants to show his respect,” she said. “It means a lot that everybody is coming together.”

Daniel Hadar, the head rabbi of Temple Moses Sephardic Congregation of Florida, an Orthodox synagogue in Miami Beach, said that the tone of Mr. Biden’s meeting signaled a shift from other meetings with families over the past week. More than a dozen people affiliated with the synagogue, just a couple of miles from Champlain Towers, were in the building at the time of the collapse.

“There was something for the first time I’m seeing: consolation,” Rabbi Hadar said. Whereas in previous meetings with officials, the rabbi has seen families express anger and frustration with the rescue process, families this time expressed “peace and appreciation.”

Apple Inc. has scaled back ambitious self-driving plans for its future electric vehicle and postponed the car’s target launch date by about a year to … END_OF_DOCUMENT_TOKEN_TO_BE_REPLACED