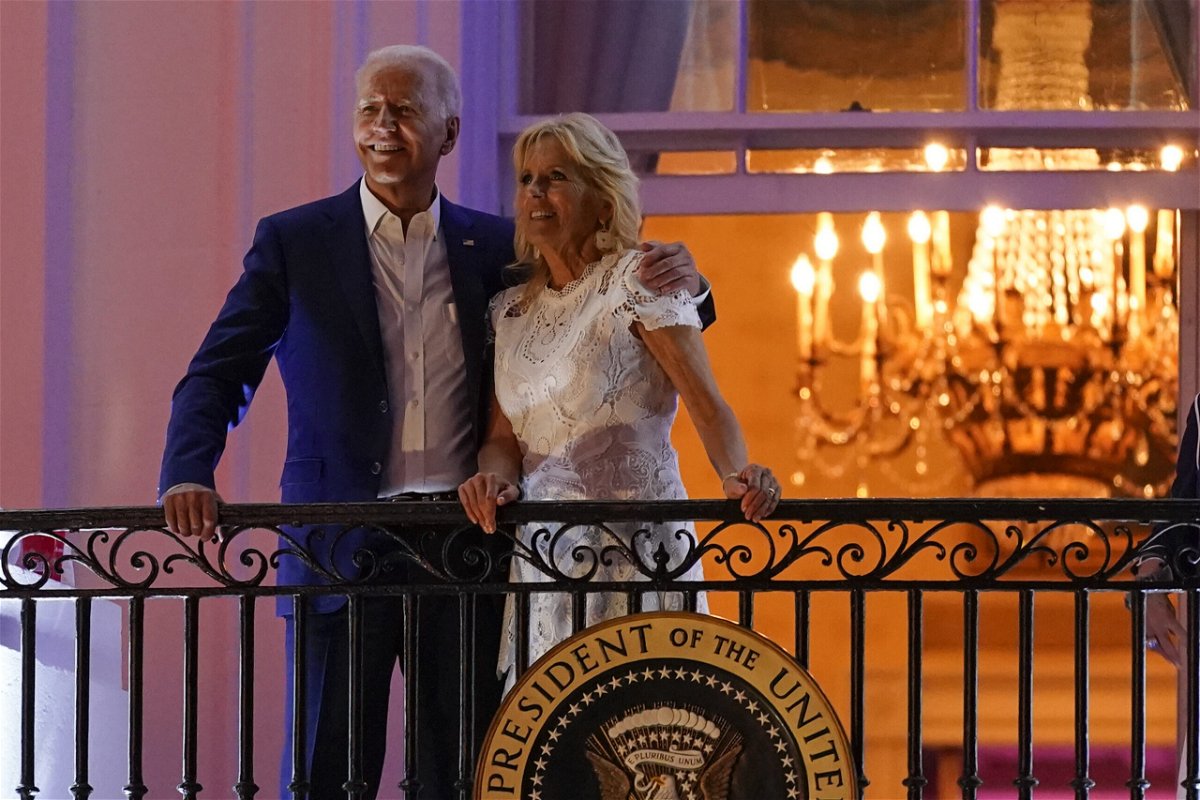 President Joe Biden began Independence Day by sharing a message that looked to the country’s future, but quickly had to respond to another mass shooting in the United States.

“Jill and I are shocked by the senseless gun violence that has yet again brought grief to an American community on this Independence Day,” the President said in a statement Monday after at least six people were killed in a shooting in Highland Park, Illinois, during a July Fourth parade.

Biden noted that he had “surged Federal law enforcement to assist in the urgent search for the shooter, who remains at large at this time,” and pointed to the gun safety legislation he recently signed into law. “But there is much more work to do, and I’m not going to give up fighting the epidemic of gun violence,” he added.

Later on Monday, Biden declined to say whether stricter gun laws would have prevented the deadly shooting when pressed by CNN’s MJ Lee. “We don’t know the circumstances yet,” he said.

Vice President Kamala Harris, who’s in California for the holiday, touted the recently signed legislation in her own statement, but added, “Today’s shooting is an unmistakable reminder that more should be done to address gun violence in our country.”

The President called on Americans to fight for democracy, while also broadly acknowledging national challenges.

“Our economy is growing, but not without pain. Liberty is under assault — assault both here and abroad,” he said, alluding to the US Supreme Court overturning Roe v. Wade last month.

“In recent days, there’s been reason to think that this country is moving backwards. That freedom has been reduced. That rights we assumed are no longer — a reminder that we remain in an ongoing battle for the soul of America, as we have for over 200 years.”

The July Fourth holiday comes amid a challenging time for the nation marked by deepening division, inflation and a recent set of polling showing that the vast majority of Americans across party lines are unhappy with the state of the US.

In an AP-NORC survey released last week, 85% of US adults say that things in the country are headed in the wrong direction, with just 14% believing things are going in the right direction. That’s a more pessimistic reading than in May, when 78% said things were headed the wrong way and 21% that things were generally moving in the right direction. And currently, both 92% of Republicans and 78% of Democrats are dissatisfied with the direction of the country — the highest number among Democrats since Biden took office last year.

Still, Biden attempted to reassure Americans, saying, “I know it can be exhausting and unsettling, but tonight I want you to know we’re going to get through all this.”

America, he emphasized, is and always will be a “work in progress.”

“It has so often been the case that after we’ve taken giant steps forward, we’ve taken a few steps backwards. And after doing the hard work of laying the foundation for a better future, the worst of our past has reached out and pulled us back on occasion. But I know this: From the deepest depths of our worst crises, we’ve always risen to our higher heights,” Biden told the crowd on the South Lawn. “We’ve always come out better than we went in.”

Earlier in the day, Biden had released a forward-looking statement about how the “best days still lie ahead.”

“The Fourth of July is a sacred day in our country — it’s a time to celebrate the goodness of our nation, the only nation on Earth founded based on an idea: that all people are created equal,” Biden said in a tweet. “Make no mistake, our best days still lie ahead.”

This story has been updated with additional developments.

CNN’s Shawna Mizelle and Ariel Edwards-Levy contributed to this report.

Editorial IndependenceWe want to help you make more informed decisions. Some links on this page — clearly marked — may take you to a partner website … END_OF_DOCUMENT_TOKEN_TO_BE_REPLACED

Investors have remained skeptical as the main indices declined this year. The NASDAQ Composite tumbled close to 20 per cent in 2o22, and the S&P 500 … END_OF_DOCUMENT_TOKEN_TO_BE_REPLACED

A variety of cannabis companies shared their financial results this past trading week, offering investors a chance to inspect the health of the … END_OF_DOCUMENT_TOKEN_TO_BE_REPLACED