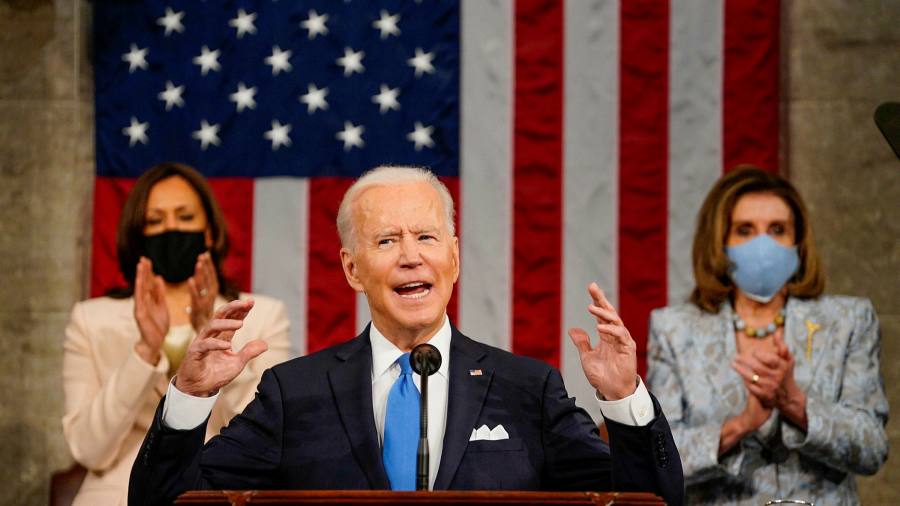 I have watched at least 20 presidential addresses to Congress. None, until now, has ended with the words “thank you for your patience”.

The effectiveness with which Joe Biden spoke was not in the oratory, or in the atmosphere, which was thinned out by social distancing. Nor was it in the substance, although Biden touted an ambitious agenda. It was his repeated use of the word “we” in place of the presidential “I” — and the fact that people at home rather than the bemasked quotient of lawmakers were Biden’s intended audience.

Most such speeches rarely move the needle — and Biden’s will probably be no exception. But on his 99th evening in office, Biden gave a clear pointer as to the kind of president he will be. The most striking is that he seems to have heeded advice about avoiding wordiness. At more than an hour, his address was not short. But it had greater economy than his average dinner peroration when he was vice-president or a senator. They say a leopard cannot change its spots. Biden’s foot-in-mouth disease was long considered one of his biggest handicaps in politics. It is hard to recall one gaffe he has made since becoming the Democratic nominee 14 months ago.

Biden frequently departed from his text on Wednesday night. But in most cases it was to make a brief aside before returning to his prepared remarks. “What? Do you think deer wear Kevlar vests?” he asked after asserting that gun-owning hunters do not need semi-automatic military rifles. Nor is there evidence of cognitive decline, although that remains a recurring trope among Biden’s critics. John Cornyn, the Republican senator from Texas, recently said that Biden’s lack of tweeting betrayed signs of an absentee president. As Biden showed in his preference for collective pronouns on Wednesday night, all that means is that he is a different character to his predecessor.

The second pointer was Biden’s relentless focus on middle class concerns. Such orations are often a mind-numbing laundry list of things the president wants Congress to pass. Biden is pushing a far-reaching set of bills covering more than $4tn in new spending, as well as immigration, voting rights and labour market reforms. But he spent more time framing his rationale than checking off what the bills included. The word “jobs” and “blue collar” kept recurring. His core message was a “blue collar blueprint to rebuild America”. Tackling climate change creates jobs, he said. There was no need to talk about melting glaciers. It was a disciplined speech aimed squarely at the middle class.

Corporate America will not be happy with Biden’s war on tax avoidance. Some of what Biden said, including his emphasis on “Buy American”, will not go down well with America’s international partners either. But none of Biden’s priorities ought to surprise anyone. During Donald Trump’s presidency, there was a recurring joke that every week was “infrastructure week”. Whenever such a rollout was announced, Trump would detonate his administration’s plans with some random initiative, usually via Twitter. If you accept his capacious definition of infrastructure (which includes social spending and much else besides), Biden’s first 100 days have been one long infrastructure week.

The third pointer was what Biden did not say. Many Democrats are worried about the political dangers posed by the “woke” cultural left of the Democratic party. James Carville, who was Bill Clinton’s electoral guru, this week said: “Wokeness is a problem and everyone knows it. It’s hard to talk to anybody today . . . who doesn’t say this. But they don’t want to say it out loud.” Biden threw no bones in his speech to the intersectional quarters of the left, which thus deprived his conservative detractors of easy talking points. Words such as “Latinx” and phrases like “transgender bathroom”, which pepper mainstream Democratic discourse, did not feature. That conveyed a shrewd reading of his party’s Achilles heel.

Biden’s speech displayed US politics at a surreal juncture in its history. As a veteran centrist, Biden is surprising the country and the world with the multitrillion dollar scale of his ambitions. But he lays his plans out in the folksy tones of a grandparental homily. On the other side of the aisle sits a Republican party that is scanning everything Biden does for signs of senility and cultural radicalism. He betrays no traces of the former and is offering very little on the latter. Contrary to recent viral rumours, Americans will still be able to eat hamburgers on July 4. Biden will doubtless be munching his in full view.

Editorial IndependenceWe want to help you make more informed decisions. Some links on this page — clearly marked — may take you to a partner website … END_OF_DOCUMENT_TOKEN_TO_BE_REPLACED

Investors have remained skeptical as the main indices declined this year. The NASDAQ Composite tumbled close to 20 per cent in 2o22, and the S&P 500 … END_OF_DOCUMENT_TOKEN_TO_BE_REPLACED

A variety of cannabis companies shared their financial results this past trading week, offering investors a chance to inspect the health of the … END_OF_DOCUMENT_TOKEN_TO_BE_REPLACED