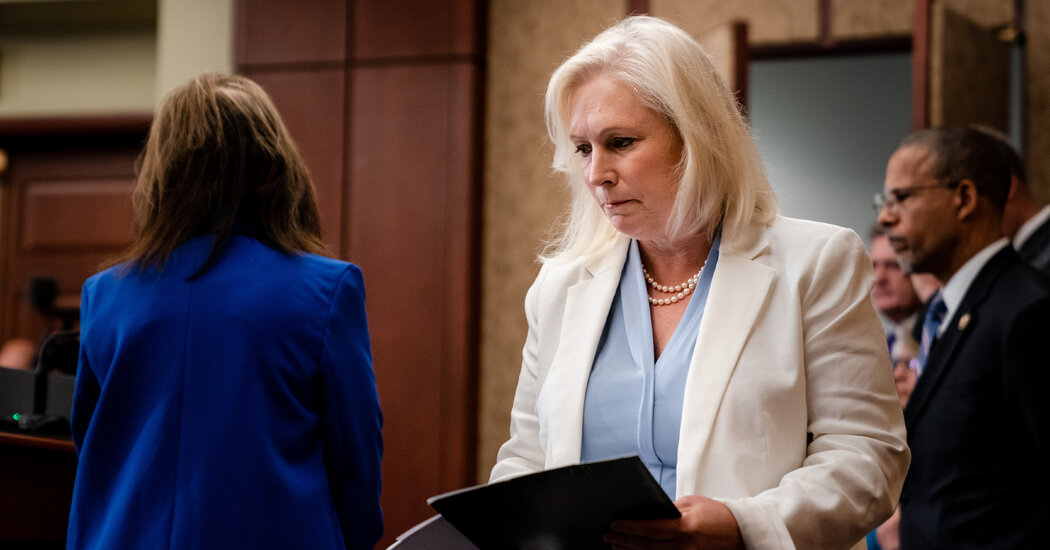 WASHINGTON — After years of resistance from Pentagon leaders, Senator Kirsten Gillibrand, Democrat of New York, appeared to be nearing victory on a major change to how the military handles sexual assault cases. But her emphasis on the inclusion of all serious crimes in the measure as a matter of racial justice now threatens to weaken her support.

But Mr. Austin and some of Ms. Gillibrand’s strongest allies in Congress on this issue are balking at the more extensive changes to the military justice system. Some lawmakers say they had only recently focused on the particulars of the measure after months of discussions.

“Her bill is far broader than I had realized,” said Senator Susan Collins, Republican of Maine and an early proponent of Ms. Gillibrand’s measure. “I believe she’s made a compelling case on sexual assault and related allegations to be taken out of the chain of command.”

But Ms. Collins said she did not think there was justification for moving other alleged crimes out of the military justice system.

Ms. Gillibrand’s bill would remove the decision to prosecute major crimes like sexual assault and other felonies such as murder from military commanders to military prosecutors. The Pentagon panel suggested a more limited change: that a special victims unit within the military should be set up for sex assault cases and a few other crimes.

But Ms. Gillibrand argues that would create an unequal system and has said her proposal would also help combat racial injustice.

A bill that would cover most felonies is “necessary,” she said Tuesday on the Senate floor, “because the current military justice system is simply not delivering justice, especially not to service members of color.”

This tactic has helped bring other voices to her cause.

“Racial and gender biases in the military have resulted in the under-prosecution of sex assault cases and the over-prosecution of Black and brown officers,” Representative Anthony Brown, Democrat of Maryland, a veteran and former Army judge advocate general, said in an interview this week.

While prosecutorial disparities in the military have existed throughout time, he said, “I think in aftermath of George Floyd’s tragic murder, it really propelled many of us to say: ‘Hey, this is a real opportunity here to fix these inequities and disparities.’”

Studies over the years have noted racial disparities in the military justice, including in how discipline is administered.

The tension building over Ms. Gillibrand’s measure and the narrower changes recommended by the military commission presents potentially tricky terrain for Mr. Austin, who has said that more forcefully addressing sexual assault, racism and extremism in the ranks are among his top priorities.

Many military leaders who reject changes in the sexual assault cases might also oppose losing other prosecutorial powers. But the focus on other crimes also could alienate some of Ms. Gillibrand’s supporters — many of whom were brought along after years of courting.

“My inclination now is to do sexual assault,” said Senator Angus King, Independent of Maine, after previously saying he would sign on with Ms. Gillibrand. “That’s been the target of our work for eight years.”

Ms. Gillibrand still appears to enjoy support among the roughly 70 senators from both parties who got on board this spring. Senator Ted Cruz, Republican of Texas, has been on her side for years, while some Democrats, like Senator Tim Kaine of Virginia, only recently joined her efforts.

“There’s a lot of reasons to professionalize the way you treat felonies,” said Mr. Kaine, who once practiced law. “Kirsten has a bright line that maybe was a little different than the way she was drawing the line earlier. But it’s a line that makes sense to us lawyers.”

Senator Josh Hawley, Republican of Missouri, agreed. “As a lawyer and former prosecutor, I think there is some value in having continuity, saying any felony crime is going to be handled the same way no matter what it is. I like that as a former prosecutor and I like it as a defense lawyer. To me it’s a plus.”

Both men said they support the bill as written but welcome further debate on the proposed changes, which would require an act of Congress.

Senator Jack Reed, Democrat of Rhode Island and the chairman of the Senate Armed Services Committee, now supports the change in sexual assault prosecutions after years of resistance. But he is a leading voice against expanding this process to other crimes.

The data on racial disparities is mixed and at times inconclusive, owing in large part to the military’s failure to keep consistent data on race and the justice system, several reports have noted.

A recent report by the Government Accountability Office found that Black and Hispanic service members were more likely than Whites to be tried in a court-martial proceedings across the military, but that race “was not a statistically significant factor for a conviction.”

A report last year by the Air Force inspector generation found that Black service members are 1.64 times more likely to be suspects in Office of Special Investigations criminal cases, but said that “the identification of racial disparity does not automatically mean racial bias or racism is present.”

The Wood River Valley real estate market continues to show signs of strength, despite rising interest rates and efforts by the Federal Reserve to slow … END_OF_DOCUMENT_TOKEN_TO_BE_REPLACED