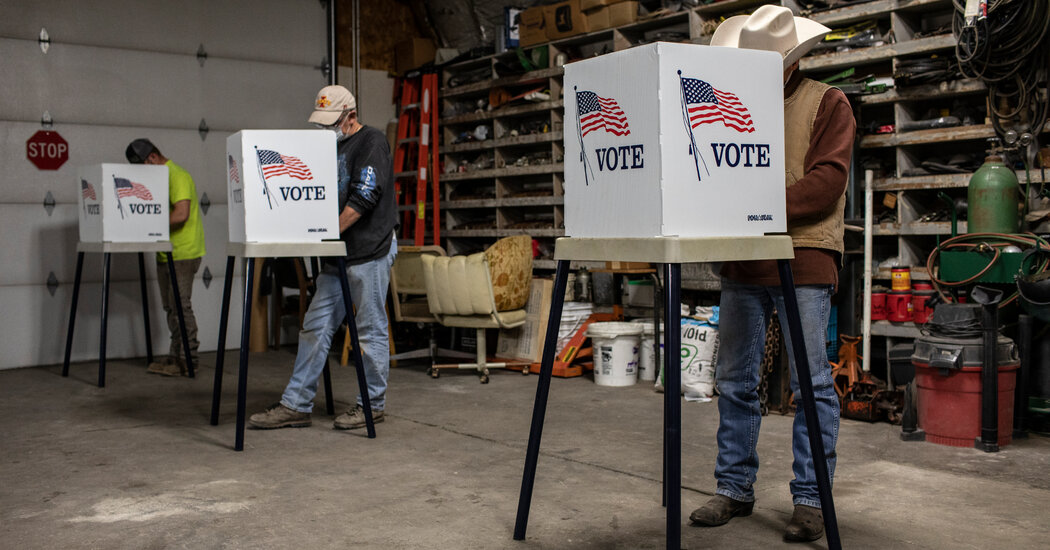 WASHINGTON — A bipartisan group of senators proposed new legislation on Wednesday to modernize the 135-year-old Electoral Count Act, working to overhaul a law that President Donald J. Trump tried to abuse on Jan. 6, 2021, to interfere with Congress’s certification of his election defeat.

The legislation aims to guarantee a peaceful transition from one president to the next, after the Jan. 6 attack on the Capitol exposed how the current law could be manipulated to disrupt the process. One measure would make it more difficult for lawmakers to challenge a state’s electoral votes when Congress meets to count them. It would also clarify that the vice president has no discretion over the results, and it would set out the steps to begin a presidential transition.

A second bill would increase penalties for threats and intimidation of election officials, seek to improve the Postal Service’s handling of mail-in ballots and renew for five years an independent federal agency that helps states administer and secure federal elections.

While passage of the legislation cannot guarantee that a repeat of Jan. 6 will not occur in the future, its authors believe that a rewrite of the antiquated law, particularly the provisions related to the vice president’s role, could discourage such efforts and make it more difficult to disrupt the vote count.

Alarmed at the events of Jan. 6 that showed longstanding flaws in the law governing the electoral count process, a bipartisan group of lawmakers led by Senators Susan Collins, Republican of Maine, and Joe Manchin III, Democrat of West Virginia, had been meeting for months to try to agree on the rewrite.

“In four of the past six presidential elections, this process has been abused, with members of both parties raising frivolous objections to electoral votes,” Ms. Collins said on Wednesday. “But it took the violent breach of the Capitol on Jan. 6 of 2021 to really shine a spotlight on the urgent need for reform.”

In a joint statement, the 16 senators involved in the talks said they had set out to “fix the flaws” of the Electoral Count Act, which they called “archaic and ambiguous.” The statement said the group believed that, in consultation with election law experts, it had “developed legislation that establishes clear guidelines for our system of certifying and counting electoral votes for president and vice president.”

Though the authors are one short of the 10 Republican senators needed to guarantee that the electoral count bill could make it past a filibuster and to final passage if all Democrats support it, they said they hoped to round up sufficient backing for a vote later this year.

Ms. Collins said she expected the Senate Rules Committee to convene a hearing on the measures before the August recess. Senator Amy Klobuchar, Democrat of Minnesota and the chairwoman of the panel, was consulted in the drafting of the legislation.

The bills were announced on the eve of a prime-time hearing by the House committee investigating the events surrounding the Jan. 6 attack, including Mr. Trump’s multilayered effort to invalidate his defeat. They also came as an investigation intensified into efforts by Mr. Trump and his allies to have Georgia’s presidential election results reversed. A Georgia judge has ordered Rudolph W. Giuliani, who spearheaded a push to overturn election results on behalf of Mr. Trump, to appear before a special grand jury in Atlanta next month.

The legislative effort in the Senate began in the immediate aftermath of the Jan. 6 attack, which unfolded as Congress met for the traditionally routine counting of the electoral ballots that is the last official confirmation of the presidential election results before the inauguration. In the run-up to the riot, Mr. Trump tried unsuccessfully to persuade Vice President Mike Pence — who presided over the session in his capacity as president of the Senate — to unilaterally block the tally, citing false claims of election fraud.

The new legislation focuses on the handling of electoral votes and does not incorporate wider voting protections sought by Democrats after some states instituted new laws seen as making it more difficult for people to vote following Democratic victories in 2020. Senate Republicans have previously blocked those voting measures.

Though there may be disagreement on specific provisions, there is widespread sentiment in Congress that some steps need to be taken to bolster the Electoral Count Act, which Mr. Manchin said on Wednesday had been “weaponized” on Jan. 6.

The backers of the legislation were optimistic that they could win passage this year, viewing that time frame as their best opportunity given the prospect that Republicans, many of whom backed challenges to electoral votes for Joseph R. Biden Jr., could control the House next year.

“The Electoral Count Act does need to be fixed,” Senator Mitch McConnell, Republican of Kentucky and the minority leader, told reporters on Tuesday. He said that Ms. Collins had kept him apprised of the bipartisan negotiations and that he was “sympathetic” to the aims of those working on the legislation.

Under the proposal to overhaul the vote count, a state’s governor would be identified as the sole official responsible for submitting a state’s slate of electors following the presidential vote, barring other officials from doing so. That provision was aimed at heading off efforts similar to those employed by Mr. Trump and his backers, who sought to put forward their own sets of electors not recognized by the states and not reflective of the popular vote.

The bill also would create a new expedited route for a candidate to challenge a state’s slate of electors. Under the proposal, those claims would be heard by a special three-judge panel with a direct appeal to the Supreme Court.

Following a standoff over the presidential transition in 2020, when Trump administration officials initially refused to provide Mr. Biden with funding and office space to begin preparations for assuming power, the legislation would allow more than one candidate to receive transition resources if the outcome remained in dispute.

And after the push by Mr. Trump and his allies to get Mr. Pence to manipulate the electoral count in Mr. Trump’s favor, the legislation would stipulate that the vice president’s role is mainly ceremonial and that “he or she does not have any power to solely determine, accept, reject or otherwise adjudicate disputes over electors,” according to a summary of the measure.

“I think it is significant to make sure that the particulars around Jan. 6, in terms of any kind of question about the role of the vice president, will be cleared up,” said Senator Mark Warner of Virginia, one of the Democrats behind the legislation.

In addition to Mr. Manchin and Mr. Warner, the Democrats are Senators Benjamin L. Cardin of Maryland, Chris Coons of Delaware, Christopher S. Murphy of Connecticut, Jeanne Shaheen of New Hampshire and Kyrsten Sinema of Arizona.

Tech Tracker rounds up what’s happening in the technology sector of the restaurant industry, including news from restaurants, vendors, digital … END_OF_DOCUMENT_TOKEN_TO_BE_REPLACED