Back in the foreign affairs committee, Sir Philip Barton, head of the Foreign Office, says he has reflected on his decision to go on holiday in August and “if I had my time again, I would have come back from my leave earlier”.

He says he returned from holiday on 26 August.

As my colleague Patrick Wintour reports, that was almost a fortnight after Kabul fell.

Sir Philip Barton permanent under secretary at the foreign office admits he did not return from a holiday abroad until August 28. Kabul fell on August 15. He says “I have reflected on this and if I had my time again I would have come back earlier”.

Q: Where were you?

Barton says he does not want to say. He was partly in the UK, he says.

Q: Have you changed holiday plans before?

He repeats the point about having refected on this.

The government has apologised for failures in the lead up to the Grenfell Tower fire, admitting to “errors and missed opportunities” that helped create “an environment in which such a tragedy was possible”. As my colleague Robert Booth reports, it told the public inquiry into the disaster it was “deeply sorry” and conceded it did not know how building regulations were being applied on the ground. It said the “system failed”.

Q: Did you or anyone from government have contact with the Taliban before they took over?

Sir Laurie Bristow,the former British ambassador to Afghanistan, says he didn’t. He was accredited to the non-Taliban government.

But Nigel Casey, the PM’s special representative for Afghanistan and Pakistan, says he did have contact with them. Those contactss were kept secret. He says there had been contacts for some years.

Survation has released a poll giving Labour a three-point lead over the Conservatives. It says this is Labour’s biggest lead in polls it has carried out since Boris Johnson became PM.

Also Labour’s first actual polling lead with us since the General Election: pic.twitter.com/faXmRrXC3g

Bristow says, ahead of the evacuation, the number of people in the embassy in Kabul had been reduced from 150 to 75.

Q: Wasn’t it likely that there would be a surge?

Bristow says that was “top of everybody’s mind”. But this was just one of several scenarios.

Q: So in April there was no plan to help people like judges who had sat in on narcotics case?

Barton says people might have been assessed under the scheme. He does no answer directly.

Casey says category 4 of ARAP said that some people who did not work directly for the British in Afghanistan (the main beneficiaries of ARAP) would be included.

Q: So did you not think that more than 4,000 people might apply.

Casey says, as the situation worsened during the summer, the number of people wanting to leave went up.

Q: How many people did you expect to have to evacuate?

Barton talks about anticipating the evacuatiuon, but does not put a number on it.

Casey says they expected to evacuate 3,000 Britons, and 4,000 others eligible under the Afghan relocations and assistance policy (ARAP).

Barton says no one expected the Taliban to take over Afghanistan as quickly as they did.

He says it was a particularly challenging period for the Foreign Office.

But he says they would like to have evacuated more.

He says there are lessons to be learnt, as with any big event.

The foreign affairs committee is about to take evidence from Sir Philip Barton, head of the Foreign Office, about the withdrawal from Afghanistan. He will be appearing with Nigel Casey, the PM’s special representative for Afghanistan and Pakistan and a senior FCDO official, and Sir Laurie Bristow, former British ambassador to Afghanistan.

There will be no changes this week to current Covid restrictions in Scotland, Nicola Sturgeon has said, while telling the Scottish public “it is time for all of us to go back to basics”

She urged employers to ensure that all staff who can are working from home until the middle of January, telling people to do a lateral flow test “on every occasion” they intend to mix with others over the festive season, whether at work, socialising or going shopping.

At her regular Covid briefing to MSPs, Sturgeon confirmed 99 cases of the Omicron variant in Scotland, an increase of 28 since yesterday.

To give a sense of the speed of increase – albeit at this stage from a low level – the figure I reported this time last week was nine.

She said health officials estimate the R number associated with the new variant may be well over 2, and that there are now confirmed cases in nine of Scotland’s 14 health board areas, “suggesting that community transmission is becoming more widespread, and possibly more sustained, across the country”.

Underlining the significance of this speed of increase, Sturgeon warned:

The sheer weight of numbers of people who could be infected as a result of increased transmissibility and some immune evasion will create this pressure even if the disease the new variant causes in individuals is no more severe than Delta. 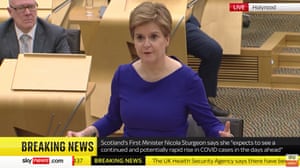 Confirmed Omicron cases in UK up by 101 since yesterday to 437, says UKHSA

The UK Health Security Agency has announced that the number of confirmed Omicron cases in the UK has gone up by 101 since yesterday and is now 437.

#OmicronVariant latest information
101 additional confirmed cases of the #Omicron variant of COVID-19 have been reported across the UK.
The total number of confirmed COVID-19 cases in the UK is 437. pic.twitter.com/5PAnH1RkvT

72 additional cases of the #Omicron variant of COVID-19 have been reported across England.
The total number of confirmed COVID-19 cases in England is 333.

28 additional cases of the #Omicron variant of COVID-19 have been reported across Scotland.
The total number of confirmed COVID-19 cases in Scotland is 99.

1 additional case of the #Omicron variant of COVID-19 has been reported across Wales.
The total number of confirmed COVID-19 cases in Wales is 5.

There have been no confirmed cases of the #Omicron variant of COVID-19 reported in Northern Ireland.

The North Idaho Sports Commission would like to thank the City of Coeur d’Alene for supporting a successful IRONMAN 70.3. Highlights included: 539 … END_OF_DOCUMENT_TOKEN_TO_BE_REPLACED

A democracy came under attack. The United States saw a threat to an ally and also to the entire world order, but it feared that sending troops could … END_OF_DOCUMENT_TOKEN_TO_BE_REPLACED