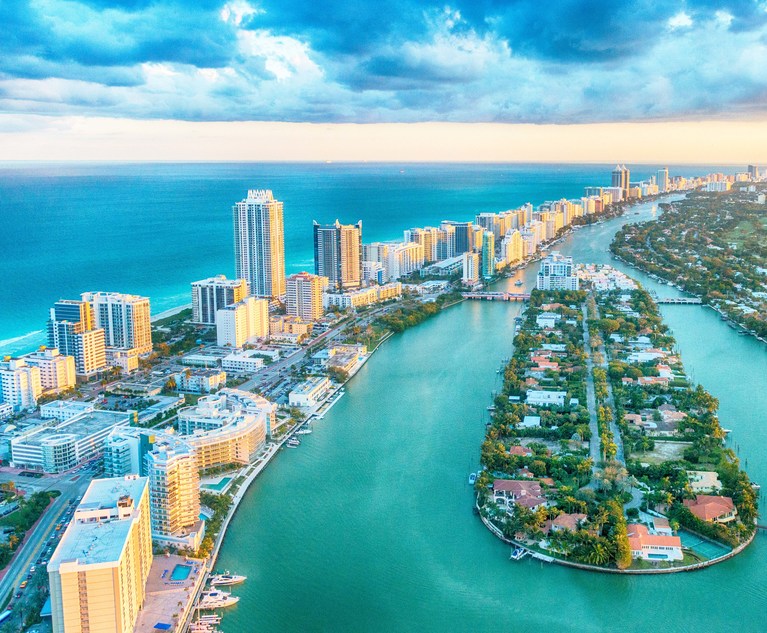 Albagli Zaliasnik, a midsize Chilean law firm, has set up a representative office in Miami to accompany clients who began shuttling assets out of the South American country when social strife erupted there in late 2019.

As a first step, the full-service firm is sharing space on Brickell Avenue with a client, venture capital fund HCS Capital, with an eye toward later assigning one or more team members to relocate to Miami.

“Our model is structured as a commercial hub and platform of legal services to accompany Chilean clients in their processes of soft landing in the U.S., operating through local partners,” managing partner Rodrigo Albagli told Law.com International.

“In the same way, we accompany our clients in access to checking accounts at banks and relationships with traditional financial entities such as real estate investment funds and venture capital,” he added.

The startup scene is booming in Miami at a time when several countries in Latin America are struggling with economic hardships that have been exacerbated by the COVID-19 pandemic, and many citizens are clamoring for change.

In the case of Chile, the country’s electorate on Sunday chose a leftist former student protest leader as their next president. Gabriel Boric vows to unravel some of the conservative economic principles that have been credited with building one of Latin America’s most stable democracies and economies.

Wealth taxes are a possibility, though many wealthy Chileans are also concerned about a potential deterioration of institutions and rule of law that could make their home country a less attractive destination for investment.

An estimated $29 billion or more has flooded out of Chile since violent protests began two years ago. A significant chunk of that capital has sought refuge in real estate, offshore mutual funds and other investments in South Florida.

Albagli Zaliasnik is not alone among Chilean firms looking to establish a beachhead stateside. In November, Carey Abogados, a large Chilean corporate firm that employs more than 270 lawyers, announced plans to open a commercial office in Miami.

Albagli said Chile’s political and economic reality in recent years, coupled with the arrival of a new president next March, has enhanced the interest of his firm’s Chilean clients in studying investment opportunities in the United States, while using Miami as a base for conducting business in Latin America.

Growth areas for the law firm include advising companies, family offices and individuals on tax matters as they seek to create structures to protect their wealth, and on creating income streams through investments in U.S. real estate.

“We’re convinced that we’re taking this decision at the right moment and that it will allow us to maximize our business strategy in which one of our stated pillars is related to the venture capital industry,” said Albagli.

Opportunities for venture capital investment in Chile and Latin America in general have ballooned in recent years as a growing number of startups tap into an underbanked and under-serviced market. A significant number of startups and venture capital funds from Chile and elsewhere in the region have opted for legal structures in the U.S. that make it easier for them to raise capital from regional and global investors.

The North Idaho Sports Commission would like to thank the City of Coeur d’Alene for supporting a successful IRONMAN 70.3. Highlights included: 539 … END_OF_DOCUMENT_TOKEN_TO_BE_REPLACED

A democracy came under attack. The United States saw a threat to an ally and also to the entire world order, but it feared that sending troops could … END_OF_DOCUMENT_TOKEN_TO_BE_REPLACED