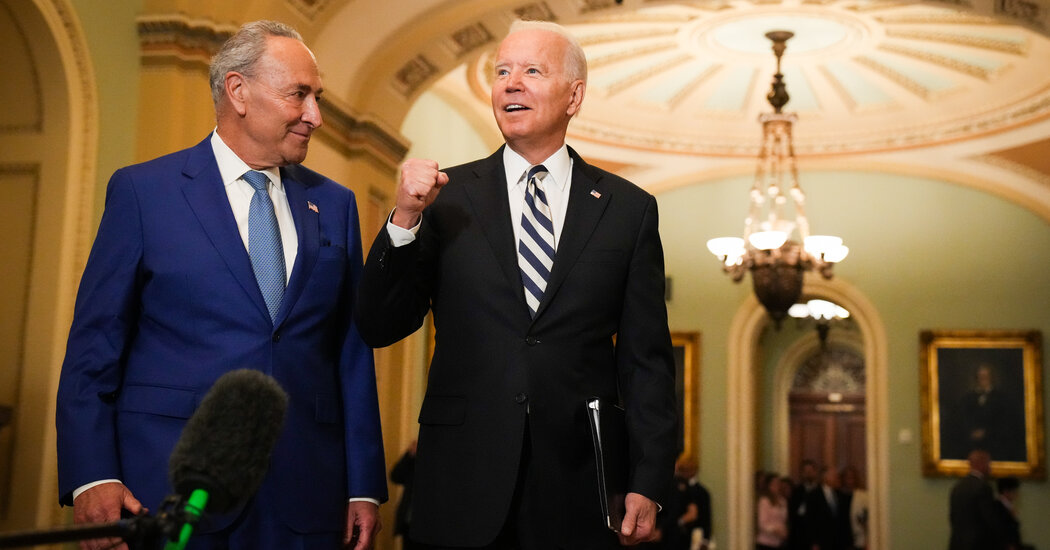 Senator Joe Manchin III of West Virginia, the centrist Democrat whose support might be determinative, told reporters after lunch with the president that he had concerns about some of the climate language. But he did not rule out supporting the budget proposal or the subsequent package. Senator Kyrsten Sinema, Democrat of Arizona and another key moderate, also hung back on Wednesday.

Still, the $3.5 trillion package had plenty in it to appeal to senior Democrats who were eager to use it to advance their longtime priorities. For Senator Patty Murray of Washington, the chairwoman of the Health, Education, Labor and Pensions Committee, it was an extension of a more generous child tax credit, as well as subsidies for child care, prekindergarten and paid family leave.

For Mr. Sanders, it was the Medicare and climate provisions.

“Finally, we are going to have America in the position of leading the world in combating climate change,” he said.

Mr. Tester said the need for school construction was so high that trillions could go to that alone.

“The plan is a strong first step,” said Senator Elizabeth Warren, Democrat of Massachusetts, adding that she was focused on funding universal child care. “We’re slicing up the money now to find the right ways to make that happen.”

The budget measure is expected to include language prohibiting tax increases on small businesses, farms and people making less than $400,000, fulfilling a promise Mr. Biden has maintained throughout the negotiations. Asked on Wednesday whether the proposed carbon tariff would violate that pledge, Mr. Wyden replied, “We’ve not heard that argument.”

Insiders who purchased US$162k worth of Compass, Inc. (NYSE:COMP) shares over the past year recouped some of their losses after price gained 14% last … END_OF_DOCUMENT_TOKEN_TO_BE_REPLACED