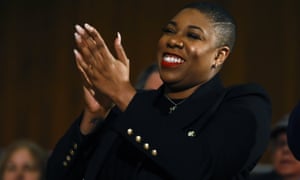 Donald Trump could end up with $100m in profit for selling a building he turned into a a Trump hotel that has reported millions in losses over the last four years, according to the Washington Post.

Trump brought a 60-year lease to the property in 2013 for $200m and now a Miami-based investment firm is hoping to turn the building into another luxury hotel, sans the Trump name. CGI Merchant, the investment firm, has indicated its willing to pay $375m for the lease, netting Trump a profit of over $100m.

Experts say that the price is in-line with what the lease could be worth, though some question whether the investment firm and Hilton Worldwide, which is hoping to turn the building into a Waldorf Astoria, will be able to make a profit from a new hotel in the building.

Seems like Mitch McConnell is suggesting to reporters that he’s not a fan of the push from House Republicans to use the government shutdown as a bargaining chip against the federal vaccine mandate. McConnell is saying that the courts will likely strike down the mandate, and using a shutdown to address it will “create chaos and uncertainty”.

On Fox, McConnell says “there’s a decent chance the courts” will strike down vaccine mandates. “I don’t think shutting down the government over this issue is going to get an outcome. It’s only going to create chaos and uncertainty.”

This is the first time that McConnell has spoken about the proposition from House Republicans.

News of the departure of Symone Sanders, Kamala Harris’ chief spokesperson and senior adviser, has further confirmed reports that the vice president’s office is beset with internal problems, with Sanders being the second high-profile exit over the last few weeks.

Some reports from as early as this summer say that Harris’ office has been experiencing low morale and poor communication between aides and top officials.

Sanders sent an email to office staff last night about her exit, with Harris’ chief of staff Tina Flournoy saying that Sanders told Harris “a couple of months ago” she would be leaving her post at the end of the year, according to Politico, which first reported her exit.

Sanders has worked with Joe Biden and Harris for over three years, first working on Biden’s presidential campaign.

Ashley Etienne, Harris’ chief of communications, announced her departure in November. Two others – Harris’ director of press operation and her deputy director in her communications department – have also told others that they are departing, according to the Washington Post.

The House rules committee just added to their already-scheduled 9.30am meeting this morning an item to discuss a stopgap bill that would temporarily extend the current level of government funding to at least February. It seems like House Democrats are really gunning to get the ball rolling – and for good reason: the longer they stall the bill, the closer a government shutdown is.

Democrats in Congress are rushing today to make a deal with Republicans that would prevent a looming government shutdown. Talks between House Democrats and Republicans stalled yesterday over a stopgap spending bill that would temporarily extend the current level of government funding.

Another potential stalemate popped up on Wednesday when a group of House Republicans encouraged their colleagues in the Senate to use the potential shutdown as a bargaining chip. They are encouraging Senate Republicans to block the stopgap measure unless Democrats agree not to direct money toward enforcing the federal vaccine mandate for large companies. Republican House and Senate leaders have not commented on the proposal.

Here’s what else we’re keeping an eye on today:

Even as the red-hot US real estate market shows signs of cooling, young house hunters are increasingly turning to their parents to help them buy homes … END_OF_DOCUMENT_TOKEN_TO_BE_REPLACED

BI App Zing Data Gets Seed Investment July 1 2022 In the US, business intelligence (BI) and visualization app Zing Data has raised $2.4m in a … END_OF_DOCUMENT_TOKEN_TO_BE_REPLACED