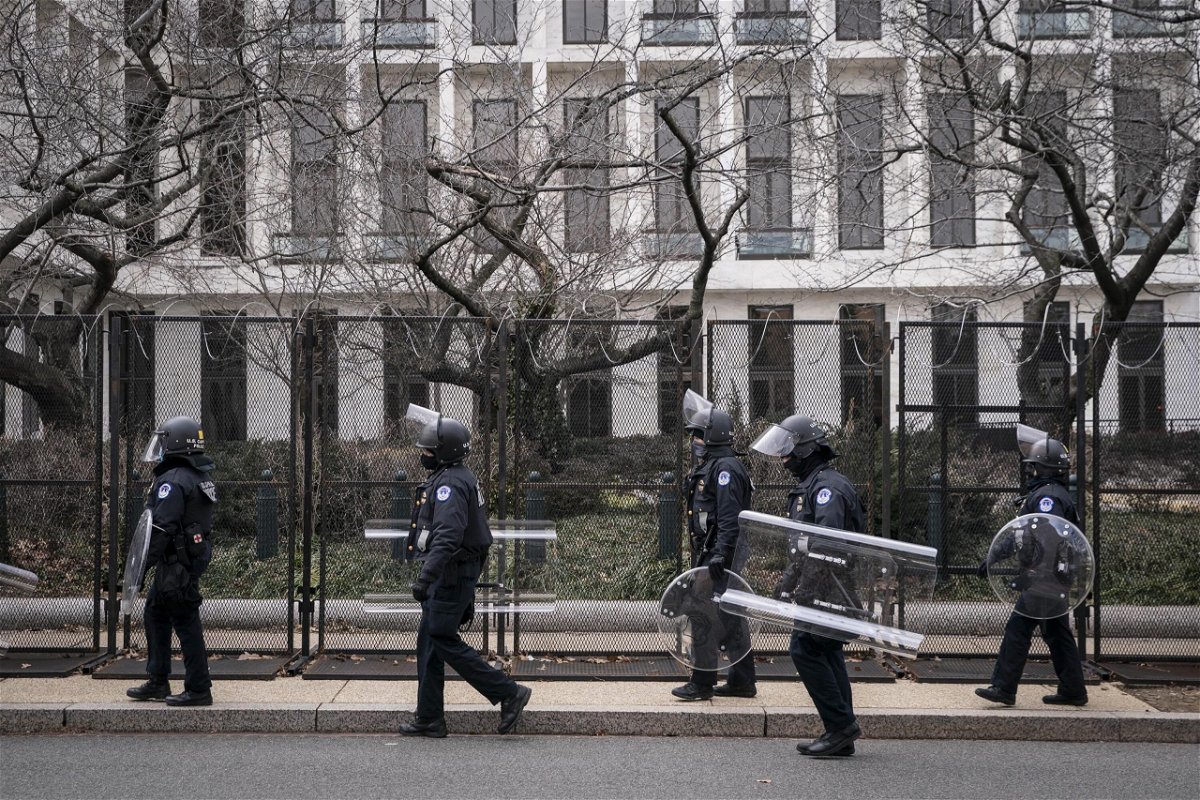 Amid mounting concern about a fresh wave of pro-Trump violence in August, more than a dozen current and former Capitol Police officers, Capitol security officials, lawmakers and aides tell CNN that not nearly enough has been done to address the security failures exposed by the January 6 attack on the US Capitol six months ago.

The mere shock of the event, and the criticism that followed, has pushed the US Capitol Police Department to make some quick changes — rank-and-file officers now get daily intelligence alerts on their cell phones. New tactical gear like helmets, batons and goggles have been purchased. And two former department leaders have been hired as security consultants to streamline improvements.

But the sweeping reforms that are widely seen as necessary to prevent a similar attack remain elusive, especially an operational and cultural overhaul of the department that some believe will take years to achieve, if it can happen at all.

“They need a radical restructure. They need to decouple it from any political structure whatsoever,” said Rep. John Katko, the top Republican on the House Homeland Security Committee who negotiated the bipartisan agreement for an independent commission that was blocked by Republican leaders.

“They’ve definitely made strides in the right direction,” Katko said. “But they’re nowhere near where they should be.”

Morale remains low among Capitol Police officers, who say they’re stuck working longer hours amid dwindling ranks. More than 75 officers have left since January 6, at a rate of about three per week, according to union leaders.

“We’re losing guys left and right,” said one officer, who like others interviewed for this story requested anonymity to speak candidly about the state of the US Capitol Police. “The young guys don’t want to be here and the old guys who are eligible are just rolling out.”

As a result, the department has already exceeded its overtime projections for the fiscal year, which doesn’t end for another three months, according to a Senate aide.

Capitol Police still lacks a permanent leader following Chief Steve Sund’s resignation after January 6. And political fighting in Congress has stymied efforts to give the department millions of dollars in new funding — and establish an independent commission to investigate what led to the attack.

Last week House Democrats voted over the objections of all but two House Republicans to create a new Select Committee, which will examine Capitol security failures in addition to the circumstances leading up to the attack. It’s unclear though what, if any changes that will lead to.

Meanwhile, threats against lawmakers are up significantly in 2021, and over the past few weeks, the Department of Homeland Security and the FBI have issued warnings of the potential for summer violence tied to conspiracy theories that Trump will return to the presidency in August. There have also been reports that the fencing surrounding the Capitol may come down as early as July 8.

At a recent roll call meeting for rank-and-file officers, the department’s new intelligence director was asked what preparations were being made in response to the conspiracy theories being shared online — and whether they could prompt pro-Trump supporters to once again descend on the Capitol. According to one source who described the meeting, the response was that nothing was being done yet, but the situation was being monitored — which the person said felt like status quo.

“What are we going to do different once the fence comes down?” said another officer. “We haven’t made any changes to prepare for it — zero — that’s what I’m worried about.”

A Capitol Police spokesperson declined to grant interviews with Capitol Police leadership for this article and did not answer specific questions submitted by CNN. Instead, the department pointed to a statement released Tuesday morning about the changes that have been made following January 6.

Capitol Police said it has beefed up training for riots and other scenarios, provided additional protections for lawmakers outside of Washington and is in the process of setting up field offices in California and Florida. It also says it’s ramped up critical incident response planning, purchased new equipment for officers and improved communication with rank-and-file officers related to intelligence.

“Throughout the last six months, the United States Capitol Police has been working around the clock with our congressional stakeholders to support our officers, enhance security around the Capitol Complex, and pivot towards an intelligence-based protective agency,” wrote acting Capitol Police Chief Yogananda Pittman.

Politics has held up funding

The same political debate that has tainted most discussions of the January 6 attack has also mired down additional funding for Capitol Police. House Democrats passed a $2 billion supplemental funding bill for Capitol security over the objections of Republicans — who raised issues with some of the line items, like a rapid response force coming from the National Guard.

In the Senate, the bill has languished, and lawmakers may slide it into the annual congressional spending process, where new spending decisions can often be kicked months into a fiscal year before a deal is reached.

Ohio Democratic Rep. Tim Ryan, who chairs the House Appropriations Legislative Branch Subcommittee that funds Capitol Police, released a fiscal 2022 spending bill that would give Capitol Police an $88 million funding boost compared to the current budget, though it’s $15 million below the administration’s budget request, which would allow for the hiring of new officers and civilian officials for Capitol Police.

But that funding could still be months from being approved.

“There’s so much we need to do comprehensively, and it takes time, but most of it starts in the bill,” Ryan said in an interview. “I’m not happy about where we are. We’ve got to be moving a lot quicker.”

Changes on the margins

Meanwhile, Capitol Police leaders have tried to implement operational and cultural changes. For example, one Capitol security official said there’s been an effort to better use intelligence to drive operations.

The department has also increased communication with law enforcement partners, according to a congressional source familiar with the USCP, and it is now working with private vendors to obtain open-source social media information to track threats, the source said.

Officers who spoke to CNN say they now receive daily email updates on their cell phones, for instance, including about demonstrations planned and intelligence. Some, however, have questioned how useful the updates have been.

There have also been some extra training sessions, officers say, including how to hand-cuff people hit by a taser. One officer told CNN most of his training occurs online. Another officer described walk-throughs for Senate and House chamber evacuations.

Capitol Police said Tuesday that its Civil Disturbance Unit, which was on the frontlines on January 6, has increased training for riots and less-than-lethal exercises, conducted a joint exercise with the National Guard, and sent CDU officials to train in Seattle and Virginia Beach.

Terry Gainer, a former US Capitol Police chief and Senate sergeant at arms, said that while intelligence sharing with rank-and-file officers is a positive sign, there’s a lot more that needs to be done to help a police force still struggling with the physical and psychological trauma of January 6.

“When you’re still working long hours and there’s a lot of change going on and people are wondering ‘When are we going to get a new chief? Is there going to be some independent commission? Are some of the members going to stop pretending this didn’t happen?’ All of that weighs heavy,” said Gainer, who is also a CNN contributor.

The Capitol Police Board has spent the past few months searching for a new chief. A selection could come as soon as this month, said the congressional source. Until then, the department will continue to be led by Pittman, who replaced Sund as acting chief after he resigned January 7.

Not long after Pittman took over, officers’ frustrations spilled into public view as members of the Capitol Police force issued an overwhelming vote of no confidence in their leadership in February.

Capitol Police union leader Gus Papathanasiou told CNN he was hopeful that a new police chief will “change things around,” but he echoed the frustrations of officers that not enough has been done.

Katko, the Republican congressman, said he wants to see the structure of Capitol Police leadership changed altogether. The Capitol Police chief reports to a police board that includes Congressionally appointed House and Senate sergeants at arms and the Architect of the Capitol.

The police board’s response as the January 6 riot unfolded fell under particular scrutiny, as the Capitol Police chief could not unilaterally request assistance from the National Guard.

“If it’s a police force, you’ve got to have a command structure that’s commensurate with law enforcement and security,” Katko said. “I think it’s as bad as I’ve ever seen at any law enforcement agency anywhere. We’re asking them to do extraordinary things with zero guidance.”

Senate Rules Committee leaders Amy Klobuchar, a Minnesota Democrat, and Roy Blunt, a Missouri Republican, introduced legislation in June to expand the chief’s authority to request National Guard assistance in an emergency and to compel the Capitol Police Board to appear together in front of Congress — something that hasn’t happened since 1945.

Capitol security officials say that even with additional threats toward lawmakers, the notion Capitol Police would be surprised again on the scale of January 6 remains remote. However, officers said they’d like to see more credence given to the threats that have swirled on far-right channels online.

One Capitol security official stressed that a rise in Internet threats — which can ebb and flow in a single afternoon based on a media interaction or a viral trigger — shouldn’t prompt Capitol Police to leap into overdrive.

The official said Capitol security leaders are watching August closely to see if anything builds into any kind of activity, though cutting through the noise remains a challenge.

“We have to be careful about assuming a tremendous rise of threats communicated via internet equates to a comparable rise in the threat,” the official said. “It’s hard for me to imagine being taken by surprise by another mob the size of the one January 6.”

Insiders who purchased US$162k worth of Compass, Inc. (NYSE:COMP) shares over the past year recouped some of their losses after price gained 14% last … END_OF_DOCUMENT_TOKEN_TO_BE_REPLACED