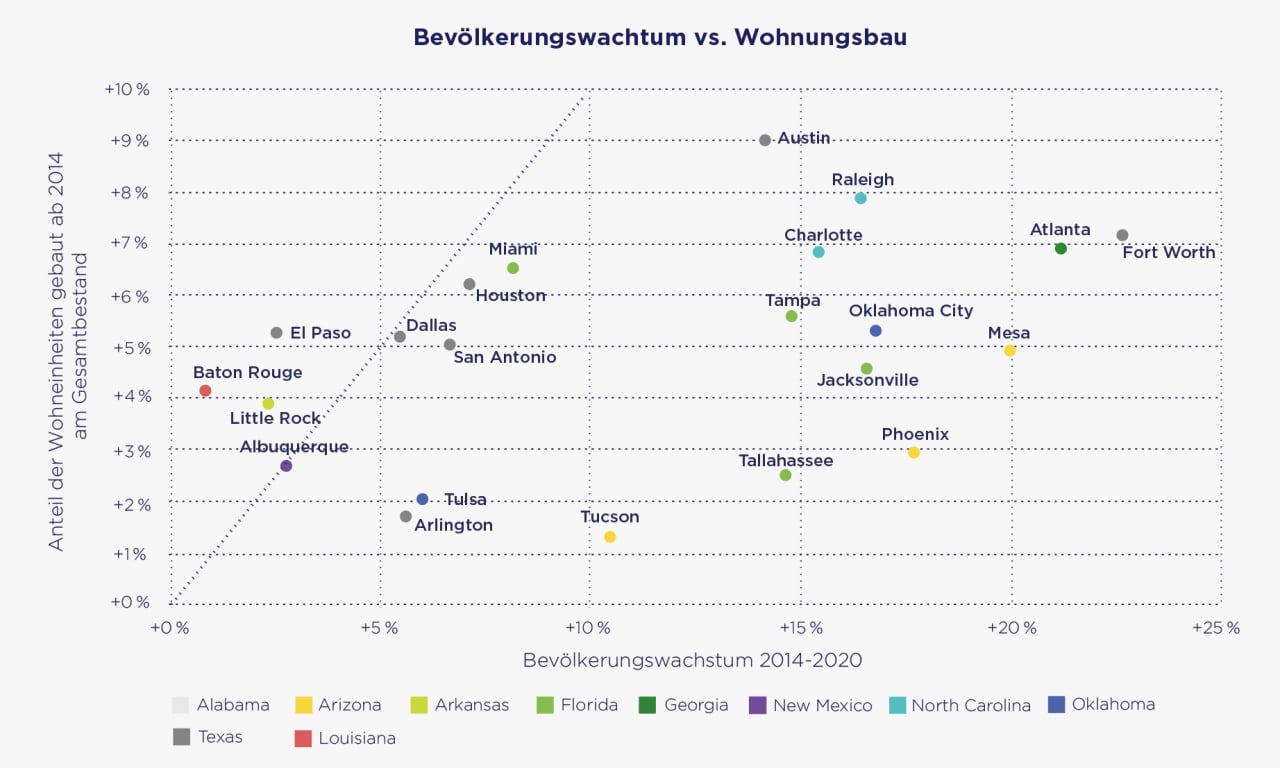 In their latest study, Empira Group, a leading investment manager for institutional real estate investing, examined economic and real estate developments in the so-called Sun Belt of the United States. The study compares a total of 13 southern states with populations of 110 million: Arizona, New Mexico, Texas, Oklahoma, Louisiana, Arkansas, Mississippi, Tennessee, Alabama, Georgia, Florida, South Carolina and North Carolina. Indicators for analysis include demographics, economic growth, income, taxes, cost of living, unemployment and innovation power. In addition, there are classic real estate indicators such as rent, purchase price, vacancies and construction activity. As a result, the sector is proving to be above average and extremely attractive to real estate investors in terms of fundamental data, market performance over the past ten years and future growth potential.

“In times of rising interest and inflation rates, real estate becomes even more interesting for hedging against inflation and generating real returns. With maximum liquidity and huge diversification potential, the US real estate market compares to the European real estate market. has a structurally high initial yield. However, not all regions in the United States are benefiting from growth, which is why it is important to identify suitable sub-markets. With reassurance. Investors should examine opportunities beyond the expensive and saturated metros on the West and East coasts,” commented Prof. Stefan Metzner, head of research at Empira and study author.

One of the most important factors for the long-term growth of real estate markets is demographics. While population growth in the United States averaged 7.7% over the past decade, some of the largest Sun Belt states recorded growth rates that more than doubled. The population of Texas increased by 17.7%, that of Florida by 16.4% and that of Arizona by 13.6%. In addition to the birth surplus, continued strong internal migration, particularly from the United States and the northeast of California, contributes to dynamic growth.

Lured by attractive climate and tax conditions as well as low cost of living, both businesses and workers are moving to the Sun Belt in the hundreds of thousands. From California alone, Texas gained more than 300,000 residents between 2010 and 2019 – a trend that accelerated again during the coronavirus pandemic and improved remote working opportunities.

“Similar to Germany, new residential construction in the metropolitan areas of the southern growth states of the United States is not sufficient to meet rapidly growing demand. This particularly applies to the rental apartment segment, which caters to the younger, mobile generations. “The risk-return ratio is attractive to investors who can build long-term multi-family portfolios,” says Lahsen Knapp, Member of the Board of Directors of Empira Group.

The gap between population growth and new housing construction is greatest in emerging metropolitan areas such as Fort Worth, Texas, Atlanta, Georgia, Phoenix, Arizona and Tallahassee, Florida. This housing gap is highly correlated with strong fundamentals such as the education level of residents and the number of local business start-ups. Atlanta, Austin and Raleigh locations have graduate quotas of more than 50% and share of training-intensive jobs of more than 20%. Florida (#3) and Georgia (#5) are both in the top five US states with the most startups.

As a result, fares have increased above average in the Sun Belt states. Between 2015 and 2020, median rents increased significantly more in Texas (22.7%), Florida (21.6%) and Arizona (20.2%) than in New York (16.2%). This offers particularly high growth potential for dynamic rental cash flow, especially compared to states with high rental and cost of living. For example, the average rent in New York is US$1,315, while the same price in Texas is US$1,082.