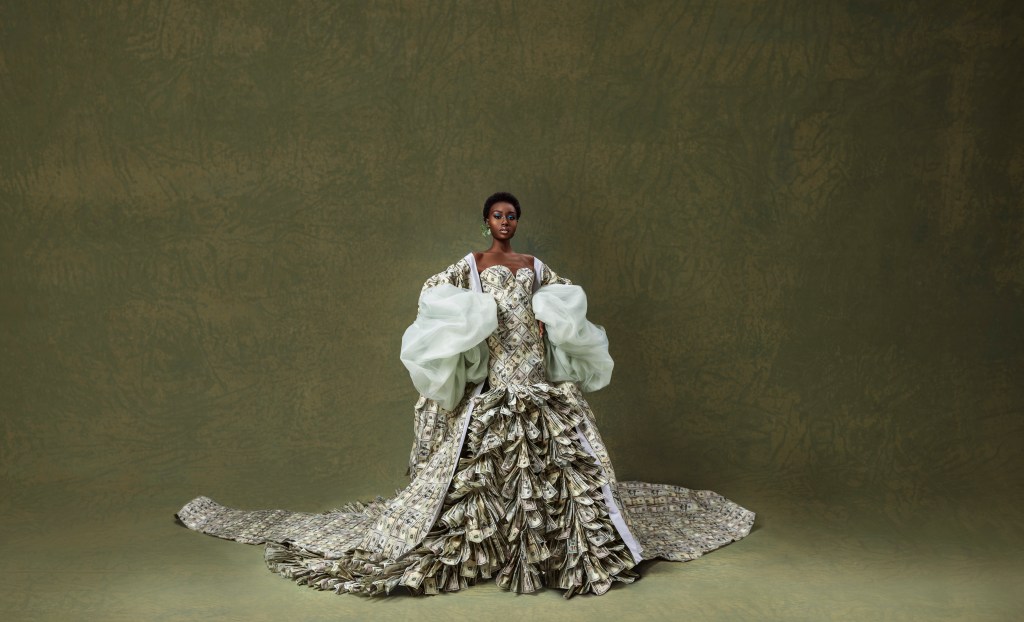 In fashion, there are statement dresses and there are dresses that make a statement.

In the case of Fe Noel’s closer for her spring 2023 collection, dubbed “the Dre$$,” it was very definitely both.

The gown? A corseted strapless gown with a ruffled petticoat, topped with a signature Fe Noel robe with voluminous sleeves and a 16-foot cathedral train — and it’s all made out of (artificial) money — $1.6 million to be exact.

The message? Because women are still being short-paid on the man’s dollar, it’s leaving them with 30 percent less in retirement savings — or $1.6 million to be exact.

Both the statistic and the dress should make people gasp, according to the womenswear brand’s namesake designer.

“When you first see the dress, it’s like this ridiculous, massive piece of art. And the reason why I use the word ‘ridiculous’ is because when I first found out the statistic and the disparity between men and women in retirement, I gasped and I was like that’s insane, that’s ridiculous. Why didn’t I know this before? Why are we just learning about this? And I wanted to display this information where people can really understand how crazy that is,” Noel, one of this year’s CFDA/Vogue Fashion Fund finalists, told WWD ahead of Friday night’s runway show. “When people see the dress — that’s why we made it so massive — I want them to gasp. I want them to first take in the details and what went into it and then understand how important the message is that we took time to make this couture gown to deliver it.”

The “money dress,” as she refers to it, is Noel’s first couture creation, which emerged as the final statement-making piece following her traditional spring collection.

And details on the dress were carefully considered to adequately deliver the message.

“It’s made out of money that looks real so we’re working with essentially paper, but I wanted the foundation of the dress to feel like a traditional corset, like a constraint, like when women used to have to tie themselves and bound themselves, I wanted the foundation to be strong,” Noel said. “We first started with fabric [and then] a traditional corset, so there’s boning, there’s ties, there’s grommets, there’s all those details. And then on top of that, each bill is sewn and it’s $1.6 million in bills.”

The cathedral train wasn’t just for show either.

“You have to think about how crazy it is, how we were working around the clock to even showcase this,” she said.

Fe Noel in her studio in the beginnings of making “the Dre$$.”

But to both Noel and financial services firm TIAA, who partnered with the brand to deliver this message during New York Fashion Week, perhaps the craziest part of all is how little this fact is discussed.

“New York Fashion Week presented us with an opportunity to bring the retirement income gap to life on a global stage,” TIAA chief marketing officer Micky Onvural told WWD. “Women retire with a staggering 30 percent less retirement income than men. We were able to work with Fe Noel to turn that shocking statistic into a visceral, visible and high-impact learning opportunity. Through this initiative, we are striving to change the conversation around retirement and reach new audiences across age, race and gender about the work that still needs to be done to ensure more people have enough income in retirement.”

Through its own #RetireInequality campaign, TIAA — whose chief executive officer Thasunda Brown Duckett is one of two Black women CEOs in the Fortune 500 — is working to lend visibility to the issue with the aim of ultimately eliminating it.

“The retirement income gap is a result of several factors, one of the most prominent being the fact that women earn approximately 83 cents on the dollar on average compared to men. In addition to this pay equity gap, women often spend more time out of the workforce raising children and caring for elderly family members. Women also retire on average two years earlier than men but live five years longer. All these root causes of the retirement gap need to be addressed and it will take all of us — business leaders, policymakers and communities — working together to make progress,” Onvural said.

“We believe that employers need to make pay equity a priority by conducting regular pay audits so they can see and address pay gaps in their workforce,” Onvural said. “We also need to expand access to opportunities for career advancement that can increase pay and boost retirement savings for women. Additionally, implementing enhanced employee benefits such as flexible workplaces, paid parental leave and family care may help ease the burden traditionally experienced by women, and in turn may encourage more women to join and remain in the workforce.”

Now that “the Dre$$”has closed the spring 2023 Fe Noel show, the designer wants the focus to be on closing that gender retirement income gap.

“Sometimes we don’t know what we don’t know, so that’s why I wanted to start by having the conversation. The dress is the beginning of that, but it’s just the first step,” she said. “And I’m so into just pouring into our youth. We’re learning stuff right now, if they can learn it a little bit earlier, it’s going to change their trajectory.

“I really don’t want it to feel overwhelming. I want it to feel like this is something we can conquer little by little. We can conquer it and change it,” Noel added. “This is the fun part and then it’s like, how do we educate, what is our call to action? Is it to start saving? Is it to open your retirement account if you haven’t yet?

Big or small, it’s all these ideas that we’re playing with and thinking: what’s next after this big reveal?”