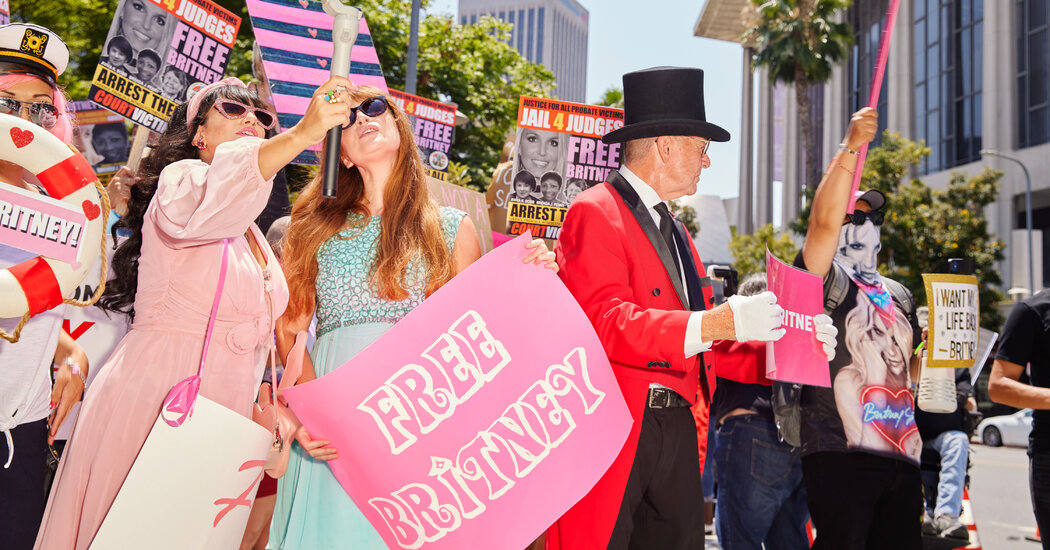 Prompted by growing public outrage over Britney Spears’s conservatorship, two members of the House of Representatives are moving to introduce legislation that, if passed, would create a pathway for Ms. Spears and other individuals to ask a judge to replace their private guardian or conservator.

The bill, known as the Freedom and Right to Emancipate from Exploitation Act, or the FREE Act, will be announced on Tuesday by co-sponsors Representative Charlie Crist, Democrat of Florida, and Representative Nancy Mace, Republican of South Carolina.

Under the legislation, individuals would have the right to ask that their private guardian or conservator, who is appointed by the judge, be replaced with a public guardian employed by the state, a family member or a private agent, which the bill argues would provide more accountability. Currently, individuals typically must prove in court that abuse or fraud has occurred in order for a guardian to be replaced. The bill could also help remedy the dearth of data on guardianships and conservatorships in the United States.

The legislation, which refers to Ms. Spears as a pop icon, will be proposed as the “Free Britney” movement has gained impressive traction, including among lawmakers, after a New York Times documentary this year revealed Ms. Spears’s yearslong struggle under her conservatorship, which began in 2008 and gave her father broad control over her life and finances. In 2019, Ms. Spears told a Los Angeles judge that under the conservatorship, she felt forced to a stay at a mental health facility and to perform against her will.

The singer’s testimony last month, in which she told a judge that the conservatorship was “abusive” and that it had “traumatized” her, has increased scrutiny of such arrangements.

The bill argues that Ms. Spears’s unsuccessful petitions in court to remove her father, Jamie Spears, as conservator show that her right to due process has been violated. However, the legislation falls far short of systemic reforms many advocates have called for. The bill would not make it easier to end such a guardianship or conservatorship, nor would it encourage state courts, which largely oversee such arrangements, to use alternatives.

The National Center for State Courts estimated that, in 2011, there were 1.5 million active guardianships alone. (A conservator generally controls an adult’s financial affairs, while a guardian control all aspects of a person’s life. But in practice, there can be little difference between the two arrangements.) Most involve seniors or individuals with disabilities. Individual cases show how little agency an individual can have in a guardianship, but there is no data about how many have petitioned to be freed.

“Guardianship is extremely restrictive,” said Prianka Nair, co-director of the Disability and Civil Rights Clinic at Brooklyn Law School. “One thing that would be extraordinarily helpful is to have legislation that actually says guardianship should be the last measure and that courts should consider other less restrictive ways of providing decision-making support.”

Rick Black, executive director of the Center for Estate Administration Reform, a not-for-profit advocacy group, who helped to shape the bill, said that he was heartened, although the path to reform remains long.

“The FREE Act is just a start,” said Mr. Black. “But it will drive discussions to hopefully give us statistics to help quantify the issues to help introduce real reforms and prosecute those who execute these crimes.”

Mr. Crist said that the bill was designed to be narrow in order to attract bipartisan support.

“We’ve tried to be very smart and focused,” he said. “That gives us a much greater opportunity to have success.”

The bill would also fund states to assign independent caseworkers to individuals under guardianship or conservatorship to monitor for signs of abuse. States who accept the grant must then require caseworkers and guardians to provide financial disclosures, an effort aimed at preventing fraud.

A previous bill aimed at reforming guardianships, introduced in 2019, failed to move beyond the House Judiciary Committee. But with lawmakers, advocates and Ms. Spears’s supporters teaming up to promote the current legislation and boost awareness, all parties are encouraged.

“We’re all taking advantage of the momentum that the Free Britney movement has provided,” Mr. Black said.

Apple Inc. has scaled back ambitious self-driving plans for its future electric vehicle and postponed the car’s target launch date by about a year to … END_OF_DOCUMENT_TOKEN_TO_BE_REPLACED