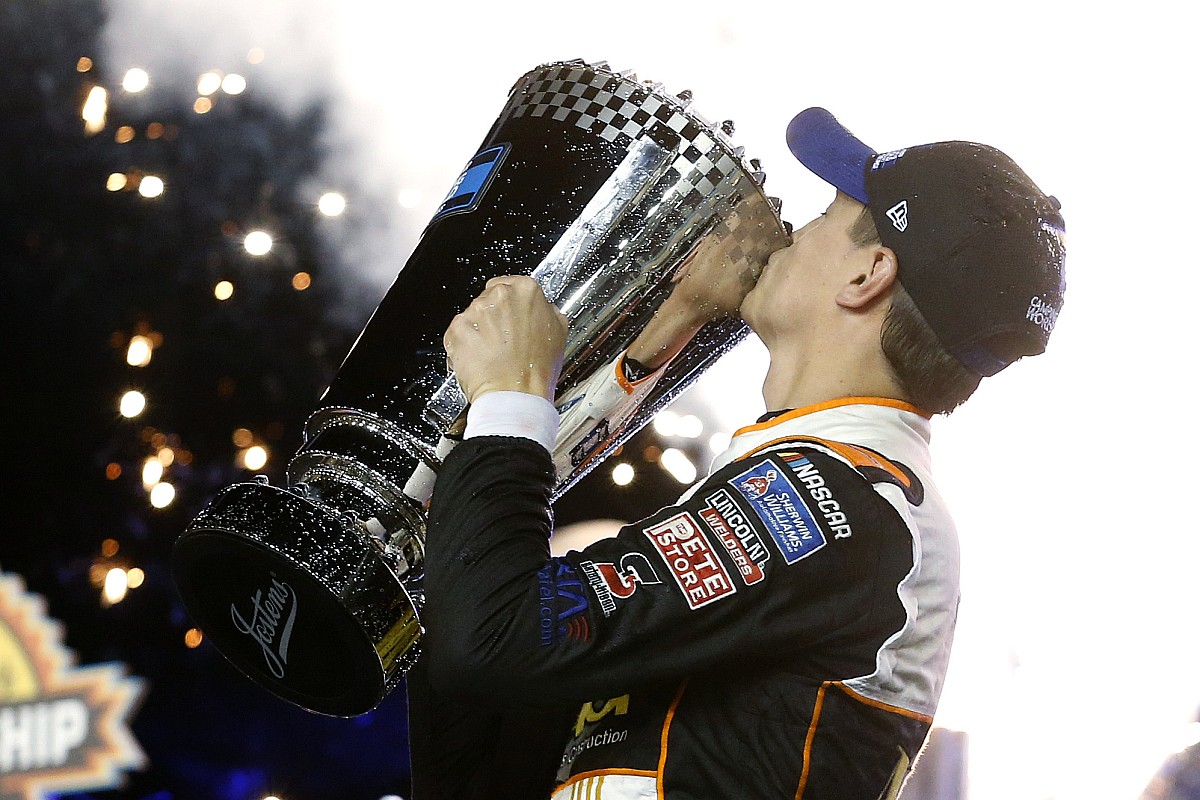 Despite finishing as runner-up in the Truck Series title chase in both 2020 and 2021, Zane Smith did not have deal locked-in when the 2022 season concluded.

Front Row owner Bob Jenkins ended up signing Smith to compete for its Truck Series team, which it only started up in 2020, but with the hope he could be a future star for the organization.

“Definitely a lot has changed,” Smith said. “I have literally stood in this parking lot three years in a row not knowing what I’m going to be doing next year.

“I knew going into this, because I’ve been through way worse times, and regardless of outcome (Friday night), I’m going to have a job next year, and that’s such a weight off your shoulders.

“With (Jenkins) giving me that confidence, I wanted to reward him with a championship, and I felt like that’s why – I don’t want to say I raced so much harder, but I just couldn’t lose another one. It just wasn’t an option.”

Most of FRM’s involvement in NASCAR has come in the Cup Series and it has enjoyed some success with three race wins, including a Daytona 500 victory by driver Michael McDowell last season.

While the organization doesn’t have the resources like Hendrick Motorsports, Joe Gibbs Racing or Stewart-Haas Racing, it has proven it can field competitive cars and contend for race wins on occasion.

Smith’s Truck Series championship is yet another stepping-stone for the organization, which continually looks to grow and improve each year.

“I’ve been with Front Row for 14 years, and to kind of think of what we were 14 years ago and where the team is today with winning three Cup Series races, a Daytona 500 and winning the Truck races with the No. 38 truck the last few years, it’s really come an awful long way,” said Jerry Freeze, the team’s general manager.

“It just helps validate our company. It’s not just a race-winning organization now but one that’s capable of winning championships. I’m excited for the future, where it might take us business-wise and with people.”

FRM has already announced plans for Smith to compete fulltime in Trucks again in 2023 but he will also run around a half-dozen races in the Cup Series in a third car next year with his first start coming in the Daytona 500.

“We obviously saw Zane’s talent driving for GMS and winning races and coming so close to winning the championship last year, and just thought that when we’ve gotten more and more serious about the Truck Series, it’s to develop – whether it’s a driver, whether it’s a crew chief or engineer or whatever for our Cup programs,” Freeze said.

“And so we looked at Zane as somebody potentially that could drive our Cup car in the future.”

Having a solid plan for his racing future is a big change for Smith and something he wasn’t always sure would pan out.

“Since I was a little kid, this is what our goal was, was man, maybe one day if everything is right, we’ll be able to go chase wins in the Truck Series, or I don’t even know if that was realistic then, any top three series in NASCAR, and many, many times it seemed so (like) this ain’t happening,” he said.

“We just never gave up, and (my friends and family) probably believed in me more than I believed in myself a lot of times. I’m just really happy I proved them right.”

Insiders who purchased US$162k worth of Compass, Inc. (NYSE:COMP) shares over the past year recouped some of their losses after price gained 14% last … END_OF_DOCUMENT_TOKEN_TO_BE_REPLACED