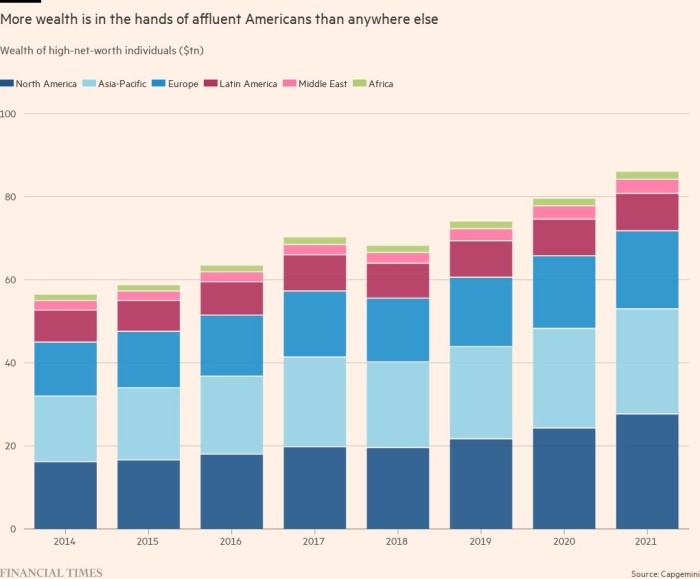 Although extravagant openings are par for the course for the world’s biggest luxury groups, the latest glitzy Hermès showcase on Madison Avenue highlights how much the industry cares about its biggest market, even as economic fears mount and inflation bites.

In the US, demand for expensive handbags and clothes bounced back very quickly from the coronavirus pandemic and has since proved surprisingly resilient. Luxury sales in the US grew almost twice as fast as the global average in 2021, and one and a half times faster in the first half of 2022, according to Citi Research.

Sector leader LVMH recently reported 19 per cent year-on-year revenue growth in the US, while Hermès grew by 24 per cent. Even the summer boom in luxury sales in Europe was driven by big-spending American tourists.

Whether this positive dynamic in the US will continue remains to be seen given the clouds gathering over the economy. After several years of double-digit growth, analysts say a normalisation to a slower pace of expansion is inevitable.

You are seeing a snapshot of an interactive graphic. This is most likely due to being offline or JavaScript being disabled in your browser.

But two of the biggest players still see the US as a priority for investment. Far from retrenching, LVMH and Cartier told the Financial Times that they plan to keep expanding across the US.

“The short-term economic outlook is hard to predict but we know we need more exposure in the US,” Cartier chief executive Cyrille Vigneron said in an interview.

Cartier, the watches and jewellery brand owned by Swiss luxury group Richemont, has doubled the size of its US business in five years, he added, and is confident it can attract more American customers.

To that end, Cartier wants to expand its store numbers from 30 to 40.

“In Texas, we’re in Dallas and Houston, so can we be in Fort Worth or Austin too?” said Mercedes Abramo, who heads North America for the jeweller. “We’re also looking at the north-west since we’re not in Seattle now, and also more locations in Florida.”

With €78bn in sales in 2021, the US luxury market is the world’s biggest ahead of China with €60bn, according to Bain, and it is evolving quickly as buyers get younger, more diverse and spread out geographically outside the traditional hubs of New York and California.

Besides the New York flagship, Hermès is opening two other stores this year that reflect the changes. The first is in Austin, to serve the growing population of wealthy tech workers who have moved from Silicon Valley, California. The other will soon open in Naples, Florida, a second-home enclave.

Kering, which owns Gucci and Saint Laurent, aims to open more than 30 US stores in the coming years, and recently opened in Columbus, Ohio, and Austin.

You are seeing a snapshot of an interactive graphic. This is most likely due to being offline or JavaScript being disabled in your browser.

This sort of geographical expansion in the US is relatively new for luxury brands, which used to rely on department stores such as Saks or now-bankrupt Neiman Marcus to serve much of the country. Before the pandemic, almost half of luxury sales in the US were in New York City, according to Bain.

Now sales are more spread out. Wealthy people have relocated with the rise of remote working, and luxury brands have won over new customers with more tailored, US-specific marketing. LVMH’s Tiffany worked with Jay-Z and Beyoncé on a glitzy ad campaign, and its cognac brand Hennessy has a partnership with the NBA.

The expansion of ecommerce during the pandemic also helped luxury brands identify new pockets of demand. “Americans have long expressed status by buying a big house or several cars and less on luxury goods, but the brands have done a lot to change that,” said Citi’s Thomas Chauvet.

LVMH is pushing its smaller brands into smaller cities, said Anish Melwani, who heads North America. Its biggest brands, Louis Vuitton and Tiffany, already have a large retail presence with 110 and 93 stores, respectively, but Dior has only 42, Fendi 36 and Givenchy eight. Beauty chain Sephora, an LVMH brand that is more mass market, has more than 500 US stores.

“The US is a priority market for investment for all of our brands, and that wasn’t the case a few years ago,” said Melwani. “Five years from now we’ll have hundreds more stores than today.”

Luxury groups’ enthusiasm for the US also stems from the fact that the outlook for China, which drove most of the growth in the past decade, has become more uncertain. Xi Jinping’s government is sticking with its zero-Covid approach, and Chinese people who used to shop for luxury goods in Europe are not travelling overseas much.

Although luxury sales have proved resilient in China, some executives argue that it is important to invest in both the US and China to hedge against unexpected risks. The Russian invasion of Ukraine was a wake-up call that caused some to wonder how they would cope if a similar scenario occurred with China attacking Taiwan.

“China had been the single largest priority for most brands before Covid-19, and now we want to make the US and China both priorities,” said Melwani.

For now, the biggest brands have said they are not experiencing any slowdown in the US, but investors have been bracing for one. The S&P Global Luxury index is down by about 30 per cent this year.

“High-end US consumers continue to have a strong purchasing power,” said Caroline Reyl, an investor at Pictet Asset Management, whose funds own shares in LVMH, Richemont and Hermès. “I would be surprised to see a huge drop in US luxury consumption, I see it more as a normalisation”, meaning a return to mid-single-digit growth rather than the double digits seen recently. 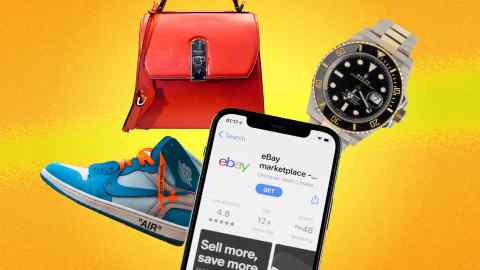 On a recent shopping trip to Cartier’s Fifth Avenue store, Christian Atangana, the chief executive of a London-based agribusiness company, was eager to treat himself after hunkering down during the pandemic. “I just turned 30 and I’ve had my eye on a few watches,” he said. On his shopping list: two Cartier models, the Santos or the Ballon watches, which start at around $6,000.

At ByGeorge, a luxury retailer in Austin, customers have been coming in to buy dresses and jewellery for charity events that are back in full swing for the first time recently. “Every weekend there are one or two galas . . . people are buying things to go out and be seen in,” said store president Molly Nutter. Sales in September and October have been better than last year. “We see that the appetite is still there.”

Insiders who purchased US$162k worth of Compass, Inc. (NYSE:COMP) shares over the past year recouped some of their losses after price gained 14% last … END_OF_DOCUMENT_TOKEN_TO_BE_REPLACED