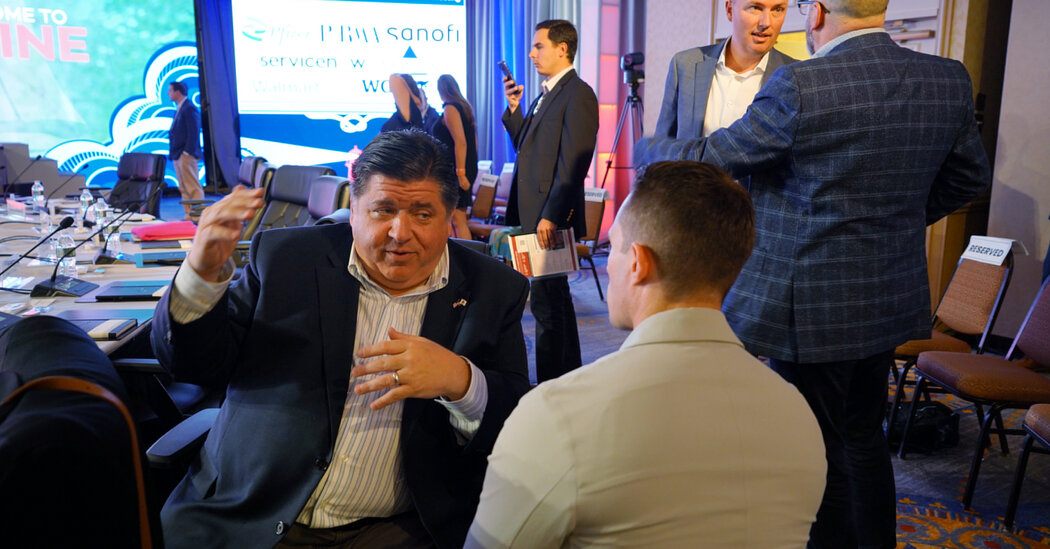 PORTLAND, Maine — A single senator put parts of President Biden’s domestic agenda in grave danger. The president’s approval ratings are anemic amid deep dissatisfaction with Washington. And as both Mr. Biden, 79, and Donald J. Trump, 76, signal their intentions to run for president again, voters are demanding fresh blood in national politics.

“Governors are the C.E.O.s,” said Gov. Chris Sununu of New Hampshire, a Republican who hopes a governor will win his party’s 2024 presidential nomination. He added that Washington lawmakers “don’t create new systems. They don’t implement anything. They don’t operationalize anything.”

In other years, those comments might have amounted to standard chest-thumping from a state executive whose race was overshadowed by the battle for control of Congress.

All of those dynamics were on display this week at the summer meeting of the National Governors Association in Portland, Maine, which took place as Senator Joe Manchin III of West Virginia appeared to derail negotiations in Washington over a broad climate and tax package.

His move devastated vital parts of Mr. Biden’s agenda in the evenly divided Senate, although the president vowed to take “strong executive action to meet this moment.” And it sharpened the argument from leaders in both parties in Portland that, as Washington veers between chaos and paralysis, America’s governors and would-be governors have a more powerful role to play.

“Washington gridlock has been frustrating for a long time, and we’re seeing more and more the importance of governors across the country,” said Gov. Roy Cooper of North Carolina, the chairman of the Democratic Governors Association, pointing to Supreme Court decisions that have turned questions about guns, abortion rights and other issues over to states and their governors.

Americans, he added, “look at governors as someone who gets things done and who doesn’t just sit at a table and yell at each other like they do in Congress or state legislatures.”

The three-day governors’ conference arrived at a moment of growing unease with national leaders of both parties.

A New York Times/Siena College poll showed that 64 percent of Democratic voters would prefer a new presidential standard-bearer in 2024, with many citing concerns about Mr. Biden’s age. In another poll, nearly half of Republican primary voters said they would prefer to nominate someone other than Mr. Trump, a view that was more pronounced among younger voters.

And at the N.G.A. meeting, private dinners and seafood receptions crackled with discussion and speculation about future political leadership.

“I don’t care as much about when you were born or what generation you belong to as I do about what you stand for,” said Gov. Spencer Cox of Utah, a 47-year-old Republican. “But I think certainly there is some angst in the country right now over the gerontocracy.”

In a series of interviews, Republican governors in attendance — a number of them critical of Mr. Trump, planning to retire or both — hoped that some of their own would emerge as major 2024 players.

Yet for all the discussions of the power of the office, governors have often been overshadowed on the national stage by Washington leaders, and have struggled in recent presidential primaries. The last governor to become a presidential nominee was now-Senator Mitt Romney, who lost in 2012.

Democrats, who are preoccupied with a perilous midterm environment, went to great lengths to emphasize their support for Mr. Biden if he runs again as planned. Still, some suggested that voters might feel that Washington leaders were not fighting hard enough, a dynamic with implications for elections this year and beyond.

“People want leaders — governors, senators, congresspeople and presidents — who are vigorous in their defense of our rights, and people who are able to galvanize support for that among the public,” said Gov. J.B. Pritzker of Illinois, a Democrat.

Mr. Pritzker has attracted attention for planning appearances in the major presidential battleground states of New Hampshire and Florida and for his fiery remarks on gun violence after a shooting in Highland Park, Ill. Mr. Biden, for his part, faced criticism from some Democrats who thought he should have been far more forceful immediately after the Supreme Court overturned Roe v. Wade.

Asked if Mr. Biden had been sufficiently “vigorous” in his responses to gun violence and the abortion ruling, Mr. Pritzker, who has repeatedly pledged to support Mr. Biden if he runs again, did not answer directly.

“President Biden cares deeply about making sure that we protect those rights. I have said to him that I think that every day, he should be saying something to remind people that it is on his mind,” Mr. Pritzker replied. He added that Americans “want to know that leadership — governors, senators, president — you know, they want to know that we all are going to fight for them.”

Gov. Phil Murphy, a New Jersey Democrat and the new chairman of the National Governors Association (who hopes to host next year’s summer meeting on the Jersey Shore), praised Washington lawmakers for finding bipartisan agreement on a narrow gun control measure and said Mr. Biden had “done a lot.”

But asked whether voters believe Washington Democrats are doing enough for them, he replied: “Because governors are closer to the ground, what we do is more immediate, more — maybe more deeply felt. I think there is frustration that Congress can’t do more.”

Few Democrats currently believe that any serious politician would challenge Mr. Biden, whatever Washington’s problems. He has repeatedly indicated that he relishes the possibility of another matchup against Mr. Trump, citing The New York Times/Siena College poll that found that he would still beat Mr. Trump, with strong support from Democrats.

A Biden adviser, also citing that poll, stressed that voters continued to care deeply about perceptions of who could win — a dynamic that was vital to Mr. Biden’s 2020 primary victory. He is still working, the adviser said, to enact more of his agenda including lowering costs, even as there have been other economic gains on his watch.

But privately and to some degree publicly, Democrats are chattering about who else could succeed if Mr. Biden does not ultimately run again. A long list of governors — with varying degrees of youth — are among those mentioned, including Mr. Murphy, Mr. Pritzker, Mr. Newsom and Gov. Gretchen Whitmer of Michigan, if she wins her re-election.

Some people around Mr. Cooper hope he will consider running if Mr. Biden does not. Pressed on whether that would interest him, Mr. Cooper replied, “I’m for President Biden. I do not want to go there.”

Indeed, all of those governors have stressed their support for Mr. Biden. But the poll this week threw into public view some of the conversations happening more quietly within the party.

“There’s a severe disconnect between where Democratic Party leadership is and where the rest of our country is,” said former Representative Joe Cunningham, a South Carolina Democrat who has called on Mr. Biden to forgo re-election to make way for a younger generation.

Signs of Mr. Biden’s political challenges were evident at the N.G.A., too. Asked whether she wanted Mr. Biden to campaign with her, Gov. Janet Mills of Maine, a Democrat in a competitive race for re-election this year, was noncommittal.

“Haven’t made that decision,” she said.

In a demonstration of just how much 2024 talk pervaded Portland this week, one diner at Fore Street Restaurant could be overheard discussing Mr. Biden’s legacy and wondering how Mr. Murphy might fare nationally. At the next table sat Gov. Asa Hutchinson of Arkansas, a Republican, who confirmed that he was still “testing the waters” for a presidential run.

Some of the most prominent Republican governors seen as 2024 hopefuls, most notably Mr. DeSantis, were not on hand. But a number of others often named as possible contenders — with different levels of seriousness — did attend, including Gov. Glenn Youngkin of Virginia and Gov. Larry Hogan of Maryland.

“I call them the ‘frustrated majority,’” Mr. Hogan said, characterizing the electorate’s mood. “They think Washington is broken and that we’ve got too much divisiveness and dysfunction.”

As demand fades in the housing market, price cuts have become widespread.  Insider asked several experts about how far they … END_OF_DOCUMENT_TOKEN_TO_BE_REPLACED