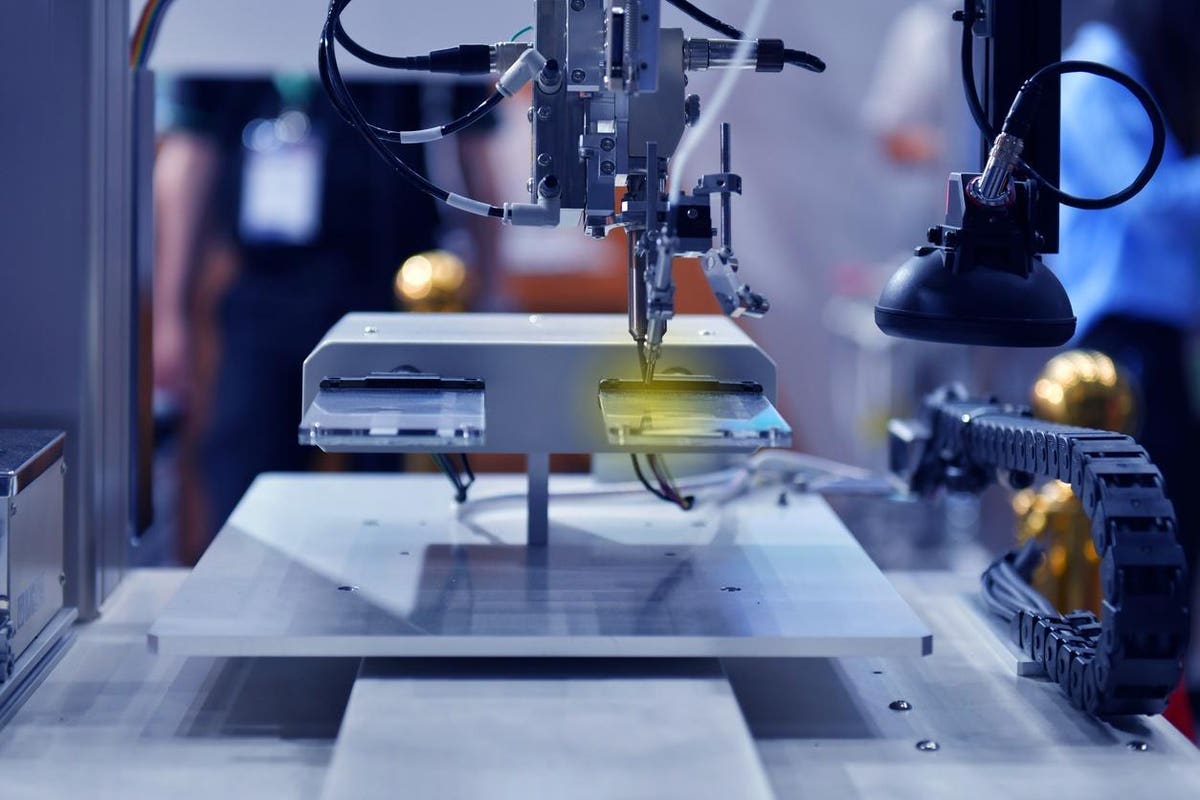 By Paul A. Laudicina and Bharat Kapoor

Last week, President Biden and Pat Gelsinger, the CEO of Intel, announced what could become “the largest silicon manufacturing location on the planet” that would start with an initial $20 billion manufacturing mega-site in New Albany, Ohio. The overall investment could eventually rise to $100 billion. The initial plans are to build two plants to research, develop, and manufacture state-of-the-art chips. Noting that Intel had helped establish Silicon Valley, Gelsinger quipped, “now we’re going to do the Silicon Heartland.”

Strengthening national (stateside) capabilities in the manufacturing and advanced packaging of semiconductors has been a major priority for the Biden Administration since its very first days in office, when by Executive Order it mandated a 100-day review of national capabilities. The New Albany announcement is a major step with respect to capabilities, but much more remains to be done. What is needed now is a strategic vision for the development of a semiconductor “ecosystem” that will propel the U.S. economy into the future. Necessarily, such a vision would lay out how the government and the private sector can work together to “seed” interlocking critical national capabilities.

There is no time to waste. A report released January 25 by the Commerce Department found that the median supply of chips held by manufacturers dropped from 40 days’ worth in 2019 to less than five days’ worth in late 2021. “The semiconductor supply chain remains fragile,” the report states. “Demand continues to far outstrip supply.”

The current shortage in semiconductors is a flashing warning light for the technological future of the United States. The unpalatable reality is that over the years we’ve ceded global leadership in semiconductor production to foreign producers ― some in unstable areas of the world, some highly vulnerable to interruptions in extended global supply chains, and some in countries that do not share American geopolitical interests ― at a time when demand is growing sharply.

The danger to U.S. political and economic interests is at once profound and imminent. The U.S. Department of Commerce notes, “the share of semiconductor manufacturing capacity on U.S. soil has fallen from 37 percent 20 years ago and [currently] stands at about 12 percent of global production.” According to our projections, U.S. capacity to manufacture strategically vital leading-edge semiconductors, if left unaddressed, will stand at just 14 percent of global capacity by the end of the decade, while U.S. demand for leading-edge chips will account for 24 percent of global consumption over the same period. This growing gap between domestic supply and demand would translate into new shortages and price dislocations ― as well as even more pronounced dependence on foreign manufacturers.

The challenge goes well beyond the level of dependence, however. Staying on the leading edge of semiconductors is essential for advancement of technologies that will fuel America’s future economic growth and competitiveness ― artificial intelligence, machine learning, autonomous driving, cloud and edge computing, high performance computing, 5G, smart phones. Leading-edge chips are equally vital to U.S. national defense, as they are integral to advanced communications, command and control systems, radar and targeting systems, military simulations, and autonomous systems such as drones.

Starting The Chip Race From Behind The Starting Line

In the absence of a strategic initiative to facilitate, support, and accelerate more New Albany-type initiatives, the semiconductor gap between the United States and the rest of the world could grow even larger. Not only would the widening of the gap mean greater vulnerability to the kind of chip shortages we are now seeing, but also it would lock the economy into other longer-term tech and economic dependencies.

Fact is, other nations are already making significant investments and enacting policies aimed at developing their own semiconductor ecosystems. Japan, South Korea, and India have all advanced such programs. In Japan, the government has committed $6.8 billion in incentives to lure global chipmakers. In South Korea, the government announced plans last May to bolster its semiconductor industry, with commitments by companies to invest 510 trillion won ($451 billion) and increased tax benefits to boost competitiveness. According to President Moon Jae-in, “Our government will unite with companies to form a semiconductor powerhouse.” In India, Prime Minister Narendra Modi has announced 760 billion rupees ($10.2 billion) in incentives to attract global chipmakers.

For many years, China has provided massive state subsidies to a range of Fourth Industrial Revolution technologies, including semiconductors, with recent incentives greater than $180 billion. Taiwan, which has already taken the dominant position, is expected to command 59 percent of global leading-edge capacity by 2030.

In addition, at the virtual meeting of the World Economic Forum last week, European Commission President Ursula von der Leyen announced plans for Europe to propose its own legislation early next month for the regulation of microchips. The goal, she stated, was to reach 20 percent of the world’s microchip production in Europe by the year 2030.

In the face of this growing competition, the state of play in the United States is improving. The Creating Helpful Incentives to Produce Semiconductors for America (CHIPS) Act passed the Senate in June 2021. The legislation includes $52 billion for domestic semiconductor production and incentives to invest in new U.S. semiconductor manufacturing facilities. House Democratic leaders recently unveiled their own bill aimed at bolstering investments in U.S. science research and development to better compete with China and address the semiconductor shortage.

Building on the latest news from Intel in New Albany, there are other promising developments in the private sector. Intel has also committed more than $200 billion to build and run Intel Foundry Services, which will deliver leading-edge chips starting in 2024. Taiwan Semiconductor Manufacturing Company (TSMC) is spending $12 billion to build a computer chip factory in Arizona for volume production of 5-nanometer chips. Samsung plans to build a $17 billion semiconductor fab in Texas to provide processors for smartphones, 5G, data centers, high-performance computing, and artificial intelligence platforms.

Impressive as all that sounds, it is not nearly enough, given the projected demand and the scale of chip production initiatives elsewhere in the world. Yet it may be enough to build upon. Build what? A vibrant and sustainable U.S. semiconductor ecosystem.

No single entity made Silicon Valley into a high-tech mecca. It began with regional universities and government research programs providing a steady stream of leading-edge technology research and a wellspring of tech talent. Engineering and manufacturing firms sprung up to convert research breakthroughs into commercially viable products, which fueled the growth of iconic hardware and software giants, which in turn funded the growth of a diverse and vibrant service sector. This network effect shaped a tech ecosystem that has thrived for decades.

A comparable network effect could speed the growth of America’s Silicon Heartland. As mentioned above, several pieces of an ecosystem are already in place. The U.S. still leads in semiconductor research, and new U.S.-based fabrication facilities are in the works. Yet America has offshored so much capacity for converting breakthroughs into usable products, we lack the critical mass to build and sustain a domestic ecosystem. Building up domestic fabrication capacity is key because large-scale fabricators are the economic engine that powers the semiconductor ecosystem, while small-scale fabricators can meet more specialized needs and push the envelope on innovation. But increasing domestic fabrication capacity alone will not restore America’s leading position in semiconductors. To get where we need to go, U.S. public and private sector leaders need to jointly pursue a range of strategic imperatives:

Seed the ecosystem. The $52 billion funding in the CHIPS Act provides seed money that summons and incentivizes much larger-scale investment from the private sector. Businesses must make the most of this and future invitations to unleash market forces to build a competitive U.S. semiconductor ecosystem.

Convert existing chip foundries into leading edge production facilities. Fabs currently idle or in danger of being technologically outmoded could be converted to increase state-of-the-art production at a fraction of the cost and time required to build new facilities.

Fund an American R&D chip fabrication lab. Domestic startups with ideas for semiconductor advances sometimes struggle to gain access to production facilities to test the feasibility of their innovations, as established chipmakers may understandably hesitate to accelerate the advance of new competitors into the market. This could be solved by a federal R&D fabrication lab, heavily incentivized for startups. When a new technology is successfully commercialized, the government would devote part of the proceeds to fund further innovation. A precedent for this approach can be found in the Bird Foundation, which supports high-tech industrial R&D to the mutual benefit of the U.S. and Israel.

Build a multinational semiconductor alliance. Since World War II, America has a track record of leading multinational coalitions to meet existential challenges. Our national interests could once again be advanced by building a multinational alliance — this time with friendly high-tech nations.

Many of the international complementarities are compelling. The U.S. leads in manufacturing tools, chip design, and IP; Japan has one of the largest pools of high-tech labor across engineers and technicians; the Netherlands hosts the global leader in EUV lithography with ASML; Taiwan and South Korea excel in foundry services; while Brazil and Australia hold the largest reserves of rare earth minerals and critical earth elements outside of China and Russia.

Cooperating under formal treaties comparable to NATO and SEATO, a coalition of technologically advanced and ideologically aligned nations could seamlessly coordinate efforts to address short-term challenges (e.g., skilled labor shortages, semiconductor-caused inflation, and supply chain disruptions) as well as longer-range strategy, including global management of supply and demand to support aggressive capex spending while minimizing the dangers of a future supply glut. For the U.S., a multinational semiconductor alliance would provide a clearer and more viable path forward, which would simultaneously guarantee capacity and increase domestic investment.

Pragmatize STEM. STEM education is a multigenerational challenge that will not be quickly resolved. Currently the number of STEM graduates is increasing, yet they often lack the practical knowledge required to fill critical roles. Educators and tech companies could substantially bridge that gap, near term, by working together to provide STEM students more hands-on experience as they pursue their degrees.

Prioritize resilience. Arguably the biggest challenge will be changing U.S. business executives’ mindset, which for decades has prioritized efficiency and cost-reduction over innovation and stateside manufacture. Outsourcing to low-cost countries has been a preferred tactic that historically has faced little to no consequences. An absence of true tests on supply chain resiliency perpetuated a globalized, cost-efficient model that shifted chip production factories overseas. This in turn has unintentionally put their companies as well as their nation in a strategically precarious position, as their globally dispersed supply chains now largely reside outside of their direct control. It is time to recognize that resilience ― the ability to anticipate, prevent and adapt to disruptions ― is at least as important as efficiency to the long-term viability and profitability of global operations. Prioritizing resilience will change the calculus to justify reshoring, innovative new approaches to supplier relations, fresh M&A priorities, and a fundamentally new vision of how to set up, scale and run supply chains.

The world is changing in ways that pose fundamental long-term challenges to U.S. competitiveness. The private and public sectors, with the support of labor, must work together now to ensure we follow a course in which all can win.

This article was co-authored with my colleague Bharat Kapoor who leads Kearney’s Americas Hi-Tech Practice and is the firm’s global lead and founder of PERLabs. We both wish to acknowledge the contributions and insights of Drew DeLong, a policy advisor at Kearney.

The North Idaho Sports Commission would like to thank the City of Coeur d’Alene for supporting a successful IRONMAN 70.3. Highlights included: 539 … END_OF_DOCUMENT_TOKEN_TO_BE_REPLACED

A democracy came under attack. The United States saw a threat to an ally and also to the entire world order, but it feared that sending troops could … END_OF_DOCUMENT_TOKEN_TO_BE_REPLACED