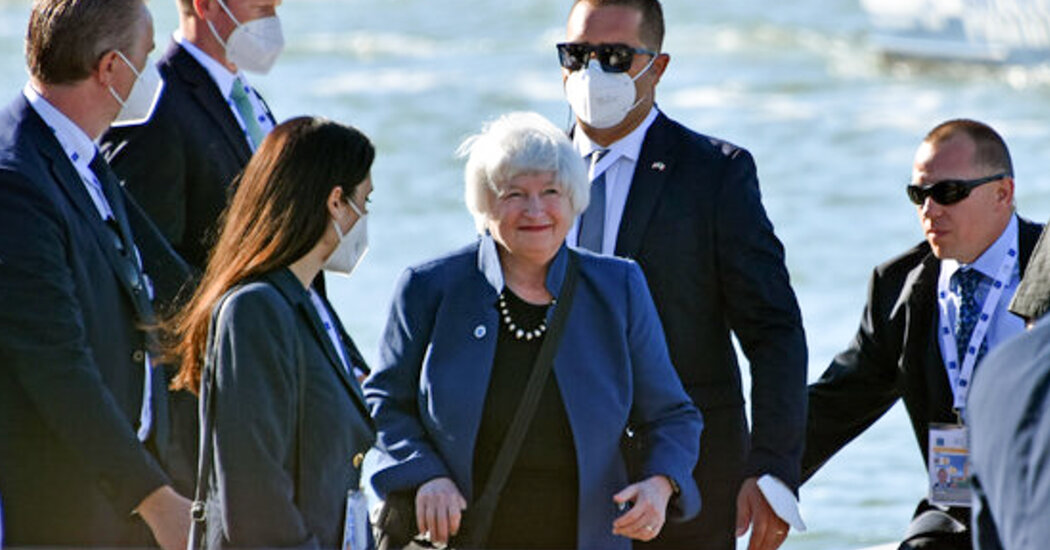 VENICE, Italy — The International Monetary Fund said on Friday that its executive board approved a plan to issue $650 billion worth of reserve funds, essentially creating money that troubled countries can use to purchase vaccines, finance health care and pay down debt.

The new allocation of so-called Special Drawing Rights would be the largest such expansion of currency reserves in the I.M.F.’s history. If given final approval by the I.M.F.’s board of governors, as is expected, the reserves could become available by the end of next month.

“This is a shot in the arm for the world,” Kristalina Georgieva, managing director of the I.M.F., said in a statement. “The S.D.R. allocation will help every I.M.F. member country — particularly vulnerable countries — and strengthen their response to the Covid-19 crisis.”

Ms. Georgieva made the announcement as finance ministers and central bank governors of the Group of 20 nations were gathering in Venice to discuss international tax reform, climate change and the global economic response to the pandemic. The I.M.F., established in 1944 to try to broker economic cooperation, has warned of a two-track economic recovery, with poor countries being left behind while advanced economies experience rapid expansions.

It remains to be seen how far the $650 billion will go to help developing countries as they race to vaccinate people before new variants of the virus take hold, including the Delta variant, which has plunged many countries back into a health crisis.

The United Nations Conference on Trade and Development called last month for $1 trillion worth of special drawing rights to be made available by the I.M.F. as a “helicopter money drop for those being left behind.”

The United States has thrown its support behind the expansion of the I.M.F. reserves, reversing a Trump administration policy and angering Republican lawmakers in the process.

The Trump administration balked at the proposal last year and prevented it from moving forward. It argued at the time that boosting the emergency reserves was an inefficient way to provide aid to poor countries and that doing so would provide more resources to advanced economies that do not need the help, like China and Russia. Republican lawmakers have since accused the Biden administration of bolstering the fortunes of adversaries, while doing little to actually help developing nations.

Under Treasury Secretary Janet L. Yellen, the United States has taken a different view and now supports the allocation. Ms. Yellen believes that rich countries will have little use for the S.D.R.s but that developing economies will be able to use them to access enough money to vaccinate their people.

Special Drawing Rights work by allowing member countries of the I.M.F. to cash the asset in for hard currency. Their value is based on a basket of international currencies and is reset every five years.

Each of the 190 countries that is a member of the I.M.F. gets an allotment of S.D.R.s based on their shares in the fund, which tracks with the size of a country’s economy. The new reserves would also be distributed under this formula, with the largest economic powers like the United States gaining the biggest tranche.

The drawing rights cannot be used to buy things on their own, but they can be traded for currencies that can. If two countries agree, they can trade their special drawing rights for cash, with the I.M.F. acting as a middleman to facilitate the trade.

That has prompted some criticism that the program will not work unless rich countries voluntarily transfer their holdings to poorer nations. To address some of those concerns, the I.M.F. is working to develop a new trust fund where rich countries can channel their excess S.D.R.s. The goal is to create a $100 billion pot of money that poor countries take loans from so that they can expand health care systems or address climate change in conjunction with existing I.M.F. programs.

The United States has previously indicated it will make available about one-fifth of its allocation, worth about $20 billion. At the urging of the United States, the I.M.F. is also working to create greater transparency around how the assets are being used so that is clear that American adversaries are not benefiting from the proceeds.

Insiders who purchased US$162k worth of Compass, Inc. (NYSE:COMP) shares over the past year recouped some of their losses after price gained 14% last … END_OF_DOCUMENT_TOKEN_TO_BE_REPLACED