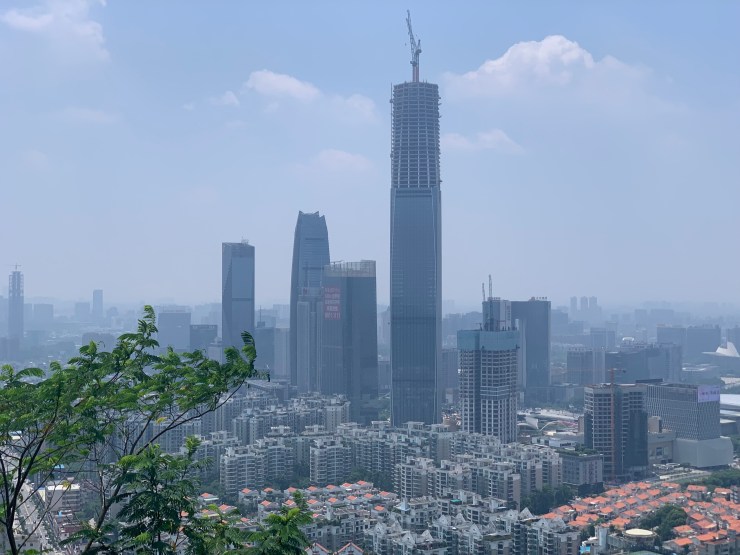 Lawyer Michael Vidler arrived in Hong Kong in 1992 and stayed on because he caught the travel bug. Since Hong Kong follows British common law, he was able to practice criminal law there without retraining.

Vidler said the display of wealth in Hong Kong back then was extraordinary.

“You would see street cleaners with pagers, if not slightly large mobile phones, which was inconceivable,” Vidler said. “It was something that I had not experienced [coming] from London.”

As the territory marks 25 years since the United Kingdom transferred control to China on Friday, people are having conversations about who will leave the financial hub next.

Hong Kong has been the go-between for the outside world and mainland China, which was still pretty closed off in the 1980s and ’90s. People who were in Hong Kong then described it as exciting, vibrant, a trendsetter. Local pop star Anita Mui was referred to as the Madonna of the East.

Many doubted that Hong Kong’s openness would remain intact once it returned to Chinese rule. In the years leading up to the handover in 1997, Chinese media estimated that 600,000 people emigrated from Hong Kong, including some of my relatives.

On June 30, 1997, when Britain’s national anthem played for the last time in Hong Kong, American businessman Benjamin Schwall was among those at the handover ceremony. He was not sad to see British rule end. Instead, Schwall and his business friends got matching dragon tattoos to celebrate the transition.

Benjamin Schwall, an American, hiking in Dongguan, China, where he has an office. (Courtesy Schwall)

“We were young. We spoke Chinese. We had a client base that was growing. We were comfortable in China and in Hong Kong,” he said. “The handover, to us, was symbolic of the China Century, and Hong Kong was the epicenter of it.”

“We had almost two decades of real success, and we wouldn’t have been able to do it without Hong Kong,” Schwall said. “But then it began to fade a little bit.”

Part of the reason for his success was mainland China becoming more open. Schwall now has an office in southern Dongguan city and can export directly from nearby ports.

At the same time, Hong Kong is becoming more closed.

During the anti-government protests in 2019, big businesses like the Cathay Pacific airline received heavy criticism from the Hong Kong government and pro-Beijing media when some employees showed sympathy toward protesters.

“That was, in my case, one of the turning points — because it is not business as usual,” said a partner in a U.S. law firm who recently relocated his family to America. He doesn’t want his name published for fear that his firm could lose mainland Chinese clients.

Then, Beijing pushed through a national security law in mid-2020 that targeted dissenters in Hong Kong. Hong Kong officials said it restored stability to the financial center.

“From that moment, there was a realization for me, certainly, that my time in Hong Kong was numbered,” said Vidler, the lawyer from London.

Over the last three decades, he has taken on some of the highest-profile human rights cases in Hong Kong, including ones that involved transgender rights and the recognition of same-sex marriages from abroad — which he argued also helps companies attract a wider pool of overseas talent.

Then, in April of this year, Vidler’s name appeared in Beijing-friendly newspapers, which alleged that he is a lawyer for protesters and anti-China groups. He denies the accusations. The papers used the fact that Vidler’s firm was listed as the company secretary for the U.S. National Democratic Institute to suggest he was backed by Americans. Subsequent Chinese articles said NDI had links to the Central Intelligence Agency. Vidler said his office merely provided a local address for official correspondence.

The new business district in Dongguan. As mainland China opened up, Ben Schwall had less reason to go through Hong Kong to reach the Chinese market. (Courtesy Benjamin Schwall)

“I saw that I was going to be the focus of investigation or arrest for doing nothing more than my job, which is to be a public-interest lawyer,” Vidler said.

Within 48 hours of those news articles coming out, he left Hong Kong for good.

On top of the political situation, Hong Kong has for the past two years enacted very tough pandemic restrictions that are similar to mainland China’s — including isolating infected children from parents who do not have COVID.

Inbound travelers are still required to be in hotel quarantine for seven days, which has been reduced from the previous 21 or 14 days, but is still far longer than other financial hubs that are removing COVID restrictions.

Between June 2020 and June 2021, nearly 90,000 of the 7 million residents left Hong Kong, according to official statistics. It’s not clear how many of them were emigrating.

The outflow may have much to do with travel restrictions to contain the pandemic, according to Rocky Tung, director and head of policy research at the Financial Services Development Council, a government advisory body. It worries him.

“Business travels and the success of Hong Kong as an international financial center has always been highly correlated,” he said. 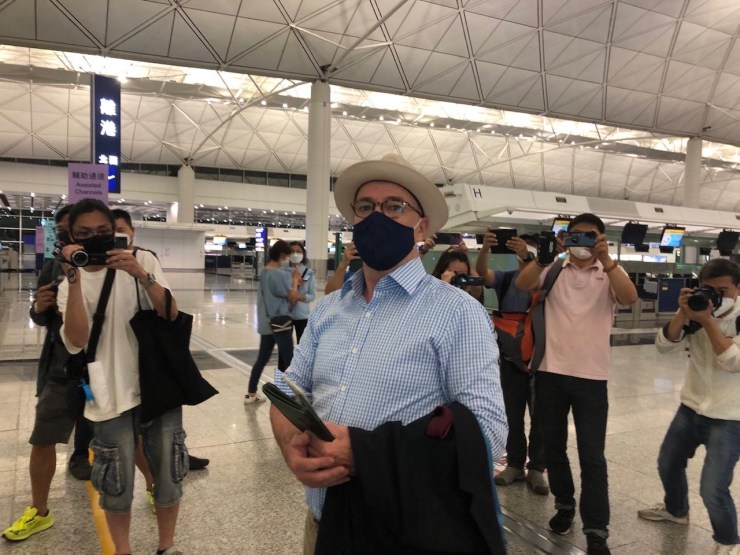 Michael Vidler at the Hong Kong airport in April surrounded by reporters, some from pro-Beijing media. They questioned him about his departure from the city. (Courtesy Vidler)

Tung said he knows businesses that relocated senior executives to places like Singapore, but he thinks it may be temporary.

He said Hong Kong is still an attractive financial hub, especially for U.S. firms focused on the Chinese market. As of 2021, there were 1,267 U.S. firms with regional or local offices in Hong Kong. 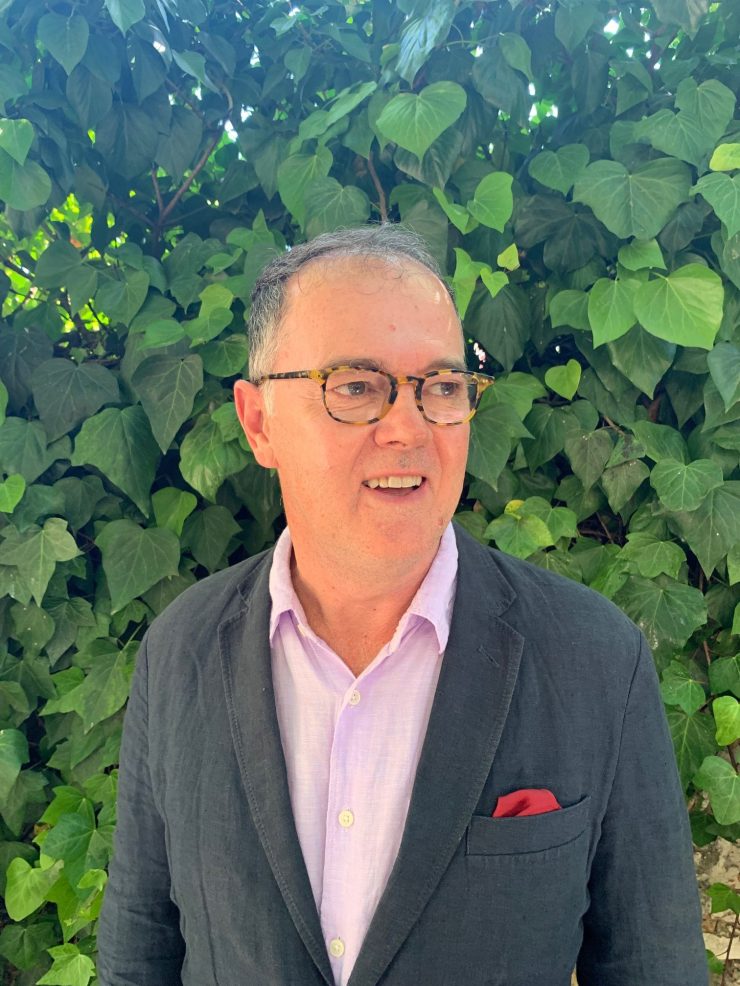 British lawyer Michael Vidler in Europe. He is still processing how his life in Hong Kong ended abruptly after 30 years. (Courtesy Vidler)

Unlike mainland China, Hong Kong has no capital controls. It is an arbitration hub, the internet is still open, it has low taxes and an English-speaking culture. Tung added that Hong Kong is the only market in China that allows investment vehicles such as special purpose acquisition companies, or SPACs, which can raise money in the public markets and buy or merge with another company.

The national security law does not affect any of that, according to Tung.

“So long as businesses are not carrying out anything that is disrupting national security, then they will be able to run their business just like the previous 23 or 25 years,” he said.

“Businessmen should understand that ultimately, the law for Martin Lee or for Jimmy Lai is sooner or later the law for them as well,” Patten told reporters this week.

In 1990, China’s de factor leader, Deng Xiaoping, met with Hong Kong tycoon Li Ka-shing and promised him that life in the territory would not change after the handover. “Hong Kong will remain the same for 50 years,” Deng said.

This year is the halfway mark.

For the lawyer who recently relocated his family to the U.S., Hong Kong was a great place for him to kick-start his international career a decade ago.

“I wouldn’t advise any young professional from anywhere in the world with ambition to consider working in Hong Kong,” he said.

There’s a lot happening in the world.  Through it all, Marketplace is here for you.

You rely on Marketplace to break down the world’s events and tell you how it affects you in a fact-based, approachable way. We rely on your financial support to keep making that possible.

Your donation today powers the independent journalism that you rely on. For just $5/month, you can help sustain Marketplace so we can keep reporting on the things that matter to you.

Tech Tracker rounds up what’s happening in the technology sector of the restaurant industry, including news from restaurants, vendors, digital … END_OF_DOCUMENT_TOKEN_TO_BE_REPLACED