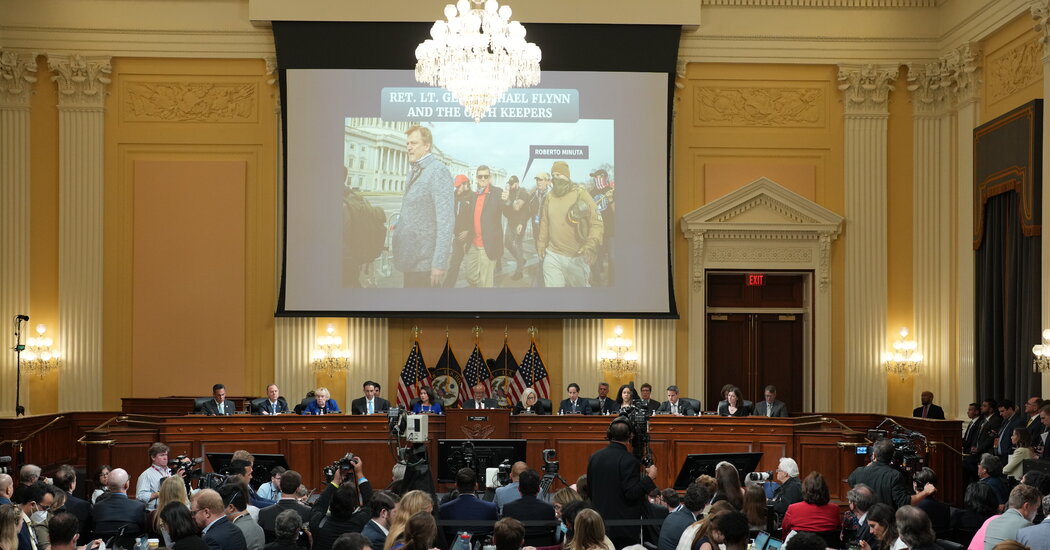 The House panel investigating the Jan. 6, 2021, assault on the Capitol held another blockbuster hearing on Tuesday, which featured previously unseen texts and draft social media posts suggesting that Donald Trump and his aides tried to make the march on the Capitol appear spontaneous even though they knew they were guiding a mob that was likely to turn violent.

To better understand the state of the House inquiry and the related Justice Department investigations, I spoke with Alan Feuer, who has been leading The New York Times’s coverage of the prosecutions of the Jan. 6 rioters and has reported extensively on extremist groups and movements. Few journalists know this world better, or have spent more time delving into obscure figures and rank-and-file members of organizations like the Oath Keepers and the Proud Boys.

Alan wrote most recently about Ray Epps, a lifelong Arizonan who recently left the state, and whose participation in the protest outside the Capitol helped spark a conspiracy theory arguing that the entire day’s events were a black operation by the F.B.I.

Our conversation, lightly edited for length and clarity:

Have we learned anything significant or new about extremist groups tied to the Capitol riot in these hearings?

The short answer is: Not really.

In the run-up to Tuesday’s hearing, the committee teased the fact that it was going to show links between extremist groups like the Proud Boys and the Oath Keepers and people in Donald Trump’s orbit.

But what actually emerged at the hearings was something a little different.

The committee didn’t break new ground but instead used public court filings and news articles to trace connections between far-right groups and Trump-adjacent figures like Roger Stone, the political adviser, and Michael Flynn, Trump’s former national security adviser. The fact that Stone and Flynn have maintained those connections is fairly well known.

Moreover, there is no direct evidence — at least not yet — that their ties to extremist groups were put to use in any planning for the violence on Jan. 6.

And what are we learning about ties between extremists and Trump or his aides?

Well, see above for the committee’s answer to that question — with a single caveat.

At a previous committee hearing, there was a brief reference made by Cassidy Hutchinson, who was an aide to Trump’s final chief of staff, Mark Meadows. According to her, on the night before the Capitol attack, Trump asked Meadows to reach out to Stone and Flynn.

We don’t know if that outreach ever occurred or, if it did, what was communicated. But it remains a tantalizing question: Why, apparently, did the president seek to open a channel to two people with ties to far-right groups on the eve of the Capitol attack?

Hutchinson’s testimony seems to have been a turning point in the investigation, and our colleagues have reported that it got the attention of Justice Department prosecutors. Can you help us understand why they might have been taken by surprise? I think most readers would assume that the Justice Department has more resources and a greater ability to compel cooperation than this committee does.

While the House committee’s investigation into the events surrounding Jan. 6 and the Justice Department’s inquiry are covering much of the same ground, they operate by different rules.

The committee has the power to issue subpoenas to pretty much anyone it wants. Federal prosecutors, however, are bound by rules of evidence that require pointing to some signs that a crime may have been committed before they use invasive techniques to gather evidence.

Prosecutors may not have known that Hutchinson had valuable information before she testified in front of the committee because they did not necessarily have a way to compel those around her to give them a sense of what she knew. After her testimony, however, things look significantly different.

Based on what we know now, how much can we say that the riot at the Capitol was planned, versus spontaneous?

What I mean is this: We know through the grueling work of open-source intelligence researchers and members of The New York Times’s stellar visual investigations team — who have pored over thousands and thousands of hours of video from Jan. 6 — that the Proud Boys, for example, were clearly moving in an organized and tactical manner on the ground that day.

It’s clear that leaders and members of the group were instrumental in several advances on, and breaches of, the Capitol that were seemingly conducted in a way to make it appear as if other, more ordinary rioters took the lead.

That said, we don’t know much about the planning surrounding the use of these tactics yet — or if anyone other than the Proud Boys helped contribute to any plans.

We know that the group’s members arranged in advance to avoid wearing their typical uniforms in order to blend into the crowd, and we know that as late as Dec. 30, 2020, dozens of members took part in a virtual meeting where leaders ordered them to avoid antagonizing the police.

But at least so far, there is no smoking gun laying out a detailed plot to storm the Capitol.

The Justice Department has focused its prosecutions on those who committed violence or vandalism as they breached the Capitol. The narrative of critics of the investigations, including the Republican National Committee, is that the administration is pursuing a “witch hunt” of ordinary citizens who were just swept up in the moment. Is there anything to that critique?

While it’s certainly true that the Justice Department’s most prominent cases concern those who had some role in violence or vandalism, many, many, many of the 850 or so people charged so far have been accused solely of petty offenses like trespassing and disorderly conduct.

Those, of course, are federal crimes, and the evidence against even these low-level offenders is quite strong, given the incredible amount of video that was taken that day.

So is it a “witch hunt” to charge people with clearly definable crimes for which there is abundant evidence?

I’ll say this: The large majority of cases in which people merely walked into the Capitol, took a selfie and walked out — and did not brag about their conduct on social media or lie to investigators when they were being interviewed — have not resulted in any jail time whatsoever.

Is there anything you think we’re missing? Anything you want to see more of? We’d love to hear from you. Email us at onpolitics@nytimes.com.

Editorial IndependenceWe want to help you make more informed decisions. Some links on this page — clearly marked — may take you to a partner website … END_OF_DOCUMENT_TOKEN_TO_BE_REPLACED

Investors have remained skeptical as the main indices declined this year. The NASDAQ Composite tumbled close to 20 per cent in 2o22, and the S&P 500 … END_OF_DOCUMENT_TOKEN_TO_BE_REPLACED

A variety of cannabis companies shared their financial results this past trading week, offering investors a chance to inspect the health of the … END_OF_DOCUMENT_TOKEN_TO_BE_REPLACED