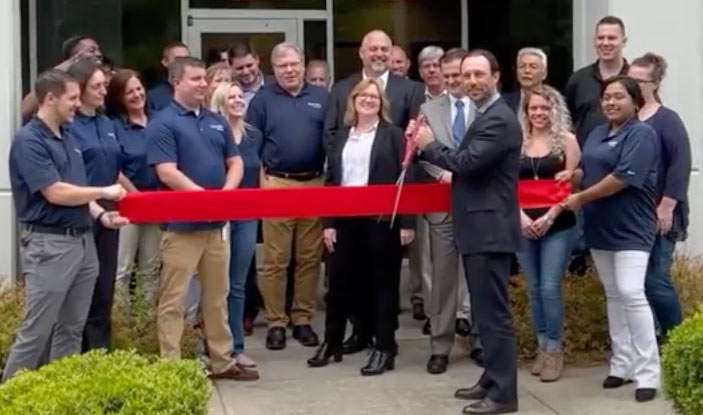 The company, a subsidiary of Japan’s century-old Maruho Co. Ltd., held a ribbon-cutting ceremony at the 22,000-square-foot facility May 24.

Company leaders outlined ambitious plans for the U.S. market that will lead to a fully equipped research-and-development lab during the project’s second phase. The facility already houses logistics, sales, business operations, human resources and light assembly, employing 24 of the company’s 35 overall staff members in the U.S.

Maruho entered Cobb County through the acquisition of Valeris Medical in 2020. The move expanded its market share and portfolio of products for soft tissue repair, including its signature suture anchors.

Used often in orthopedic and sports medicine procedures, these anchors are drilled into bone to provide a place where new tendons and ligaments can be tied down. Torn ACLs and rotator cuffs are among the most common repairs performed using Maruho products.

The company in April hired as its new president 20-year industry veteran Chris Runnells, who cut the ribbon on the new facility in the presence of local staff and leadership from the Japanese parent company. Global CEO Atsushi Sugita addressed the crowd via video. Attendees toured the facility to learn about its products and expansion plans.

“We’re knocking on doors all over the country,” said Jason Osier, U.S. business development director, who provided a detailed overview of the company’s products.

Maruho’s current portfolio tackles primarily shoulder, foot and ankle procedures, with a focus on anchors made of medical-grade plastic material called PEEK, sometimes combined with titanium eyelets.  However, with ambitions to become a leader in soft-tissue management, Maruho Medical hopes to broaden its product range by expanding into knee and hip procedures, as well as (perhaps) ventures into biologic material in the distant future.

In addition to hospitals and universities like the Medical University of South Carolina and others all over the country, the company is seeing increased demand in surgical centers that are popping up to provide outpatient procedures (often arthroscopically), freeing up all-important bed space, said Mr. Osier, who takes significant time in the operating room training surgeons and staff until they feel comfortable with Maruho’s products.

Other than that, he’s meeting with prospects and managing nationwide distribution.

“I spend a majority of my time in the airport,” Mr. Osier said.

“Innovative products require manufacturing innovation in the device space, and we intend to grow our capabilities as we expand our addressable markets,” Vice President of Quality and Regulatory Affairs Yannick Spenninck said in an internal interview posted to social media. “Additionally, the new facility ensures that we are able to remain compliant with global regulations in a fast-evolving healthcare market.”

Maruho is one of more than 30 Japanese companies with operations in Cobb County. Its facility is located at 3005 Chastain Meadows Parkway, Suite 300.

Even as the red-hot US real estate market shows signs of cooling, young house hunters are increasingly turning to their parents to help them buy homes … END_OF_DOCUMENT_TOKEN_TO_BE_REPLACED

BI App Zing Data Gets Seed Investment July 1 2022 In the US, business intelligence (BI) and visualization app Zing Data has raised $2.4m in a … END_OF_DOCUMENT_TOKEN_TO_BE_REPLACED