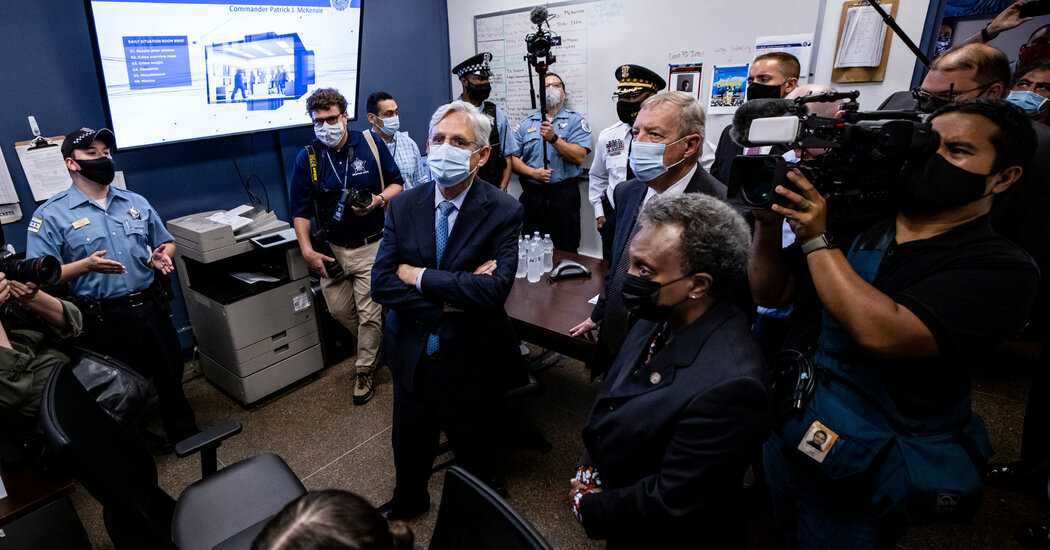 Attorney General Merrick B. Garland traveled to Chicago, where one of the strike forces will be located, to highlight the plan and underscore the Biden administration’s efforts to curb the spread of illegal firearms. A Chicago police officer and two agents from the Bureau of Alcohol, Tobacco, Firearms and Explosives were shot while working undercover in the city this month.

“The gun violence tragedy now facing the country, needless to say, affects our communities and our security and safety, but it also affects our law enforcement officers,” Mr. Garland said in remarks at A.T.F. headquarters in Washington before leaving for Chicago.

He also appealed to lawmakers, who have not yet confirmed President Biden’s nominee to lead the bureau, David Chipman. “A.T.F. is on the front lines of our efforts to battle gun violence,” Mr. Garland said. “We are very hopeful that the Senate will soon act.”

The bureau will serve as a key coordinating partner in the strike forces, which will be overseen by U.S. attorneys in New York City, Chicago, Los Angeles, Northern California and Washington, D.C. The Justice Department has identified those places as end points for significant gun trafficking corridors.

The department, which announced the creation of the strike forces in June, said that they would work with local law enforcement partners to halt illegal gun trafficking.

“We all know our job is to go after those who pull the trigger,” the deputy attorney general, Lisa O. Monaco, said at the A.T.F., where she and Mr. Garland met in person with bureau leaders and New York Police Department investigators. Top prosecutors from around the country joined by videoconference.

“Our job is also, of course, to go after the sources of those guns, the corridors that they travel in and the networks that feed those guns to the places where they are doing the most violent crime,” she added, “and that is what this series of strike force efforts is all about.”

Mr. Garland and Senator Richard J. Durbin, Democrat of Illinois and the chairman of the Senate Judiciary Committee, then flew to Chicago, where they toured a local police precinct. Officers described how they use license plate readers and ShotSpotter — software that employs surveillance equipment and artificial intelligence to detect and record gunshots — to disrupt crimes and determine how to allocate police resources.

One monitor showed a live feed of surveillance cameras in the city, and another displayed ShotSpotter notifications.

Mr. Garland, a Chicago native, called gun crime a continuing tragedy. “I feel it particularly in my hometown,” he told reporters after visiting the police precinct.

He said the strike forces built on previous federal efforts, including Project Safe Neighborhoods, a similar initiative by the Trump administration. “We’re learning from the past,” Mr. Garland said.

But unlike past programs, the strike forces will focus on trafficking corridors across law enforcement jurisdictions. For example, the U.S. attorney’s office in Chicago will look for illegal guns not only in the city, but also as they are moved along routes to Chicago from Southern Illinois, Indiana and Wisconsin.

He and Mr. Durbin went to St. Agatha’s Church in Chicago to meet with about 10 community organizers, including Evelyn J. Diaz, the president of Heartland Alliance, which she described as a global anti-poverty and human rights organization that works with marginalized people.

Ms. Diaz and her colleagues have worked with men involved in gun crimes to provide them with jobs, cognitive behavioral therapy and other resources intended to help them change their lives. She introduced Mr. Garland to the group, saying she wanted him to “leave Chicago with some sense about what the Department of Justice can do, what our federal government can do to help Chicago, help us reduce shootings and homicides in our communities.”

Mr. Garland said that her efforts were unique and that the Justice Department had money for violence prevention and was seeking to fund programs that had achieved results.

“What we want to do is find the programs that have really worked, help them as much as we can in the cities which are really suffering, and then transport that policy around the country to other cities,” Mr. Garland said.

While the strike forces focus on illegal gun sales, he said that the Justice Department was also supporting the Biden administration’s overall push for more gun regulation by suggesting new legislation that would enable the government to track so-called ghost guns, privately made firearm kits that do not have serial numbers.

“We heard quite a bit this morning about the amount of ghost gun sales, which are turning out to be a pretty significant portion of the guns used in crimes,” Mr. Garland said, referring to his meeting at A.T.F. headquarters.

Insiders who purchased US$162k worth of Compass, Inc. (NYSE:COMP) shares over the past year recouped some of their losses after price gained 14% last … END_OF_DOCUMENT_TOKEN_TO_BE_REPLACED