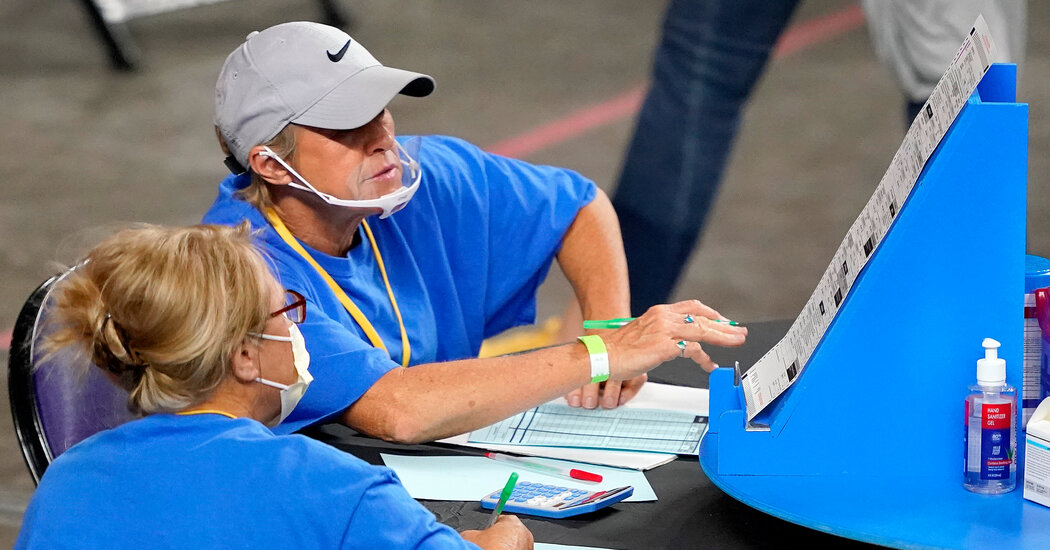 WASHINGTON — The Justice Department on Wednesday sent another warning shot to Republican state legislatures that have initiated private audits of voting tabulations broadly viewed as efforts to cast doubt on the results of the presidential election.

The department warned that auditors could face criminal and civil penalties if they destroy any records related to the election or intimidate voters in violation of the Civil Rights Act of 1960 and federal laws prohibiting voter intimidation.

The admonishment came in election-related guidance documents issued as part of the department’s larger plan to protect access to the polls, announced by Attorney General Merrick B. Garland in June. Another document released on Wednesday outlined federal laws on how ballots are cast and said that the department could scrutinize states that revert to prepandemic voting procedures, which may not have allowed as many people to vote early or by mail.

The warning was the Justice Department’s latest effort to alert state lawmakers that their audits could run afoul of federal law. Department officials cautioned the Republican-led Arizona State Senate in May that its audit and recount of the November election in Maricopa County, widely seen as a partisan exercise to fuel grievances over Donald J. Trump’s election loss, may be in violation of the Civil Rights Act.

The lawsuit, particularly its attempt to prove lawmakers’ intent, was the Biden administration’s most aggressive effort yet to expand or preserve voter protections. But it comes as Senate Republicans have stymied efforts to pass federal voter protection laws and the Justice Department has acknowledged that Supreme Court rulings have limited its own ability to prevent discriminatory voting laws from being enacted in states.

While the department can sue over state voting laws it deems discriminatory or over audits that violate federal statutes, multiple election cycles will play out before those cases are resolved in the courts.

The Arizona audit is led by a private contractor called Cyber Ninjas whose owner, Doug Logan, has shared conspiracy theories that voting machines were rigged and that the election was stolen from Mr. Trump.

A county judge in Arizona recently ruled that the state’s Republican senators must make public information about Cyber Ninjas and other private companies hired to conduct the Maricopa County audit, rejecting their request to keep the documents secret.

“It is difficult to conceive of a case with a more compelling public interest demanding public disclosure and public scrutiny,” Judge Michael W. Kemp of Maricopa County Superior Court wrote in the ruling.

While the Justice Department did not name the Arizona audit in its guidance documents, it said that it was concerned that some jurisdictions conducting audits could imperil the existence of election records.

“This risk is exacerbated if the election records are given to private actors who have neither experience nor expertise in handling such records and who are unfamiliar with the obligations imposed by federal law,” the department said in one document.

A Justice Department official speaking to reporters declined to say whether any audits had been found to have violated the Civil Rights Act. The official spoke on the condition of anonymity and did not provide a justification for doing so.

The department’s guidance also sought to dispel the false notion that the election was marked by rampant fraud, noting that state and federal officials have called it “the most secure in American history.”

The guidance mirrored a statement by Mr. Garland last month that states have justified their postelection audits with voter fraud assertions “that have been refuted by the law enforcement and intelligence agencies of both this administration and the previous one, as well as by every court — federal and state — that has considered them.”

Mr. Trump and his supporters have falsely claimed that the election was fraudulently stolen from him, ignoring assertions by his own appointed officials that there was no widespread voter fraud.

Nevertheless, Arizona, Georgia and other states have used the specter of election fraud to pass legislation that restricts access to the polls and hire private auditing companies to perform recounts that have helped sow doubts about the veracity of the election results.

Mr. Garland said in May that the Justice Department would double the enforcement staff that handles voting issues in part to scrutinize these new laws and audits. At the time, the staff numbered around a dozen people, according to people familiar with it.

The department official confirmed on Wednesday that the staff size had doubled, but would not specify its total.

Apple Inc. has scaled back ambitious self-driving plans for its future electric vehicle and postponed the car’s target launch date by about a year to … END_OF_DOCUMENT_TOKEN_TO_BE_REPLACED