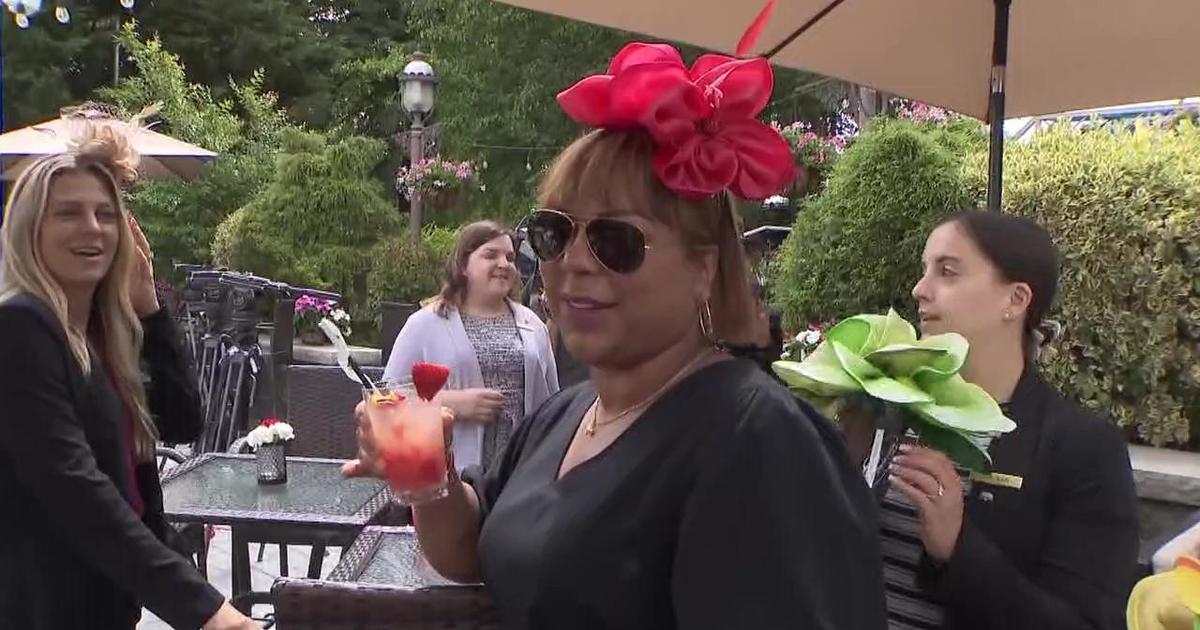 ELMONT, N.Y. – The hoopla is building for this weekend’s historic Belmont Stakes, back to its normal crowd capacity for the first in three years.

Horse racing fans are hoping for clear skies, and CBS2’s Jennifer McLogan say Long Island businesses are hoping the odds are in their favor for an economic boost.

The starting gate was brought to the Garden City hotel – the tradition kicks off Belmont Stakes festivities.

The Belmont Jewel – the official cocktail of the Belmont Stakes – is being served alongside a 2022 version, the Belmont Buck – bourbon, lemon juice and ginger beer.

“The hats are the excitement. Part of the day of racing is finding the outfit , finding the perfect hat,” said Christine Moore of Moore Millinery.

“Tens of thousands of people are going to be at the racetrack this Saturday, and millions of people from around the world will be watching,” said Nassau County Executive Bruce Blakeman.

“Be prepared. There is a lot of security, but it’s to keep you safe. We will not allow anyone to fly a drone anywhere near that park,” said Nassau Police Commissioner Patrick Ryder. “If you’re coming in with a bag, that bag will be inspected.”

“This is the first time since 2019 that we have an open door, full capacity event, and it’s great,” said NYRA President & CEO David O’Rourke.

Businesses are thanking the horses. Many Elmont residents say they wish they could bottle this week’s excitement, and also bring in needed jobs, and long stalled economic development.

“Of course it will give a boost. I wish it would stay longer, would continue more than just this week,” said Robert Castellano of Sapienza Bake Shop.

Sapienza’s is preparing hundreds of extra specialties, and Stop 20 diner is already feeling the boost.

“We are success. Thankful to the community that is supporting us, giving us business, and we want to stay as long as we can,” said co-owner Steve Serafis.

The diner’s name – Stop 20 – is because it is located at once was the 20th stop of trolley that ran east from Queens. It’s a good luck location, so close to the sprawling Belmont Park, that opened in 1905 – the final jewel of the Triple Crown.

During her decades-long career, Jennifer McLogan has been recognized for her coverage of breaking news and live reporting on major stories that include the September 11 attacks, Superstorm Sandy, the Gilgo Beach Murders, the Long Island Rail Road massacre, the crash of TWA Flight 800, the Philadelphia Police firebombing of the radical group Move, the Hamptons’ Pine Barrens fires, and major snowstorms crippling the Northeast. In sports, she covered Super Bowl XLVI, World Series with both the Yankees and the Mets, NBA finals with Michael Jordan and the death of Arthur Ashe.

Even as the red-hot US real estate market shows signs of cooling, young house hunters are increasingly turning to their parents to help them buy homes … END_OF_DOCUMENT_TOKEN_TO_BE_REPLACED

BI App Zing Data Gets Seed Investment July 1 2022 In the US, business intelligence (BI) and visualization app Zing Data has raised $2.4m in a … END_OF_DOCUMENT_TOKEN_TO_BE_REPLACED