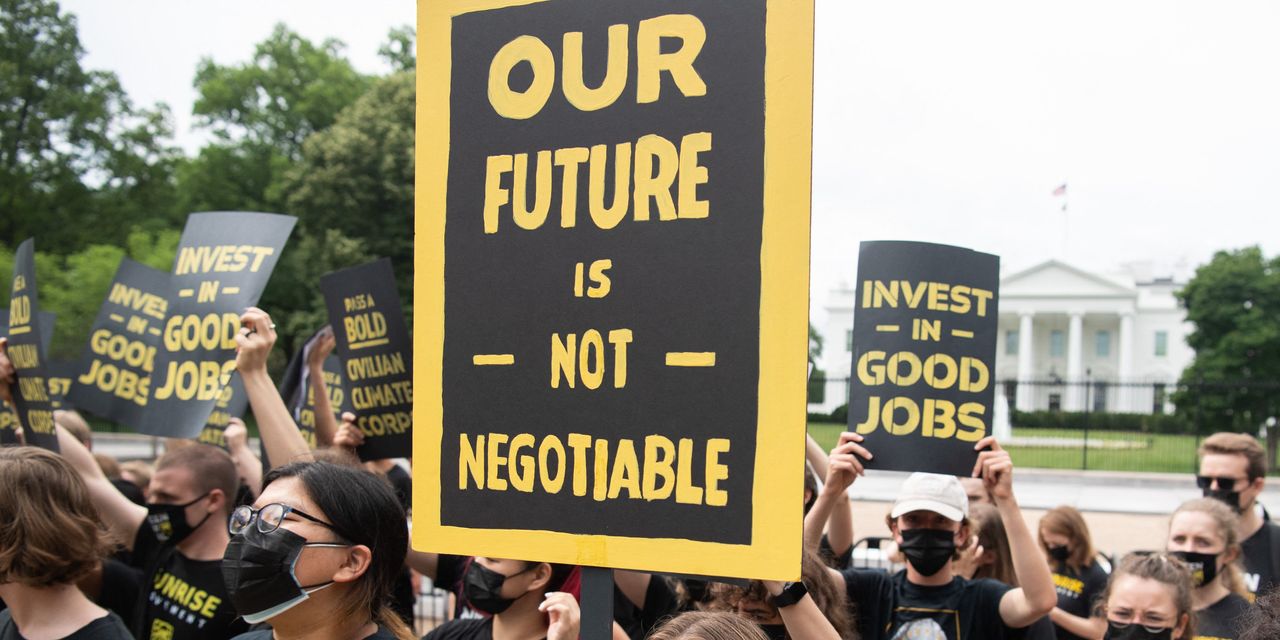 CAMBRIDGE, Mass. (Project Syndicate)—With the annual inflation rate in the United States reaching 5% in May, economists and investors are right to be apprehensive about deficit spending, public debt, and the risk of sustained price growth—which is higher now than it has been for almost four decades. But it would be a mistake to respond to these concerns by pumping the brakes on the economy.

No, the government cannot borrow and spend as much as it likes without paying any costs, as some progressives would have us believe. But nor can those worried about inflation ignore the deeper problem afflicting the U.S.: deep political polarization, accompanied by an erosion of trust in government. A rapid economic recovery, spearheaded by public policies that encourage employment and wage growth, is the best chance the U.S. has to restore trust in government—and in democracy.

“
The first step to reversing America’s political dysfunction is to show that both the economy and the government can work for all.
”

The real risk stemming from inflation is that it will distract us from this fundamental issue.

Joseph Stiglitz: The fear of inflation is a red herring designed to distract us from the need for policies to reduce inequality

Is it already too late?

To be sure, there is no silver bullet against political dysfunction. Some commentators are understandably worried that the U.S. has already reached a point of no return. After all, a majority of Republicans cling to the false belief that Donald Trump won the 2020 election, and by some estimates, 15% of the U.S. population are adherents of the pro-Trump QAnon conspiracy theory. These figures point to a difficult road ahead.

But we should remember that people tend to trust democracy more when it delivers on its promises of stability, shared prosperity, and effective measures to fight poverty.

“
American democracy is in trouble, and a robust, inclusive government-led recovery may offer the last best chance of putting it on a sounder footing.
”

For example, those who grow up in stable democracies where there is rapid economic growth and adequate public services are much more likely to oppose autocrats and unaccountable technocrats. By the same token, periods of economic stagnation and soaring inequality tend to fuel polarization and a loss of public trust, as has happened in the U.S. and many other countries around the world in recent decades.

The U.S. economy used to create good jobs—with decent pay, reasonable levels of security, and career-building opportunities—for workers from all kinds of backgrounds and with all kinds of skills. For 35 years after World War II, workers at both the bottom and the top of the income distribution benefited from robust employment growth and rapid wage increases.

The jobs report numbers showed hiring picking up in June, but the overall moderate pace of gains in recent months suggests employers are still struggling to fill the abundance of open roles. WSJ’s Sarah Chaney Cambon explains why workers might not be eager to take those jobs just yet. Photo: Mike Bradley for The Wall Street Journal

But this era came to an end in the 1980s, when median wages stagnated and inequality began to creep up. Rather than enjoying wage gains, men without a college degree started experiencing sharp declines in job options and real (inflation-adjusted) earnings.

The Americans who have been experiencing wage declines and dwindling opportunities are overrepresented among those moving to the extremist fringes of U.S. politics. If you think the economy isn’t working and cannot work for you, it is understandable that you might be sympathetic to opportunist politicians and media figures calling for a “rigged” system to be dismantled.

“
Getting the economy working again offers the best chance to rescue American democracy. The risk of a little higher inflation is no reason to squander the opportunity.
”

Of course, economic problems are not solely responsible for the sorry state of U.S. politics. The Republican Party, too, has played an outsize role in the dysfunction. Starting with Richard Nixon’s “Southern strategy”—which sought to capitalize on white backlash against the Democrats’ 1960s civil-rights agenda—the GOP decided that polarization was good politics.

The more the Republican Party has shifted to representing white, non-college-educated voters (a shrinking share of the population), the more it has had to rely on voter suppression and other anti-democratic tactics to maintain its position, a trend that has peaked with Trump.

But the Democratic Party is not blameless. The Wall Street bankers who caused the 2008 financial crisis were rescued not just by George W. Bush but also by Barack Obama. It was the Obama administration that ultimately decided to help the banks and the bankers at all costs, and which later chose not to prosecute any of the guilty parties.

Voters’ suspicions about a too-cozy relationship between government and finance were confirmed, accelerating the loss of trust in institutions and supplying plenty of ammunition to those already inclined to regard government as the problem, not the solution.

If this diagnosis is correct, the first step to reversing America’s political dysfunction is to show that both the economy and the government can work for all. Generating jobs and wage growth for Americans of all backgrounds and skills should be a top priority. While we could focus simply on expanding the size of the overall economic pie and then redistributing it, that strategy is unlikely to leave voters feeling invested in the system. Enabling people to contribute meaningfully to the economy and society is a much better way to get them on board.

If infrastructure spending, expansionary fiscal and monetary policies, safety-net enhancements, job-generating investments, and other official measures are seen to be part of a robust recovery, that will further support the idea that government still works. Trust in state institutions cannot be restored simply by extolling their virtues in the abstract. Citizens must see and experience the benefits that come from institutions functioning effectively.

Can American democracy be rescued through a well-crafted economic recovery? There is no guarantee. The U.S. economy has neglected workers without college degrees (and increasingly workers with college degrees, too) and catered to the needs of large corporations for so long that it may be too late to change course now. With corporate America funneling investment into technologies to automate jobs, surveil workers, and push down wages, the plight of the average American worker may continue to deepen.

It also might be too late to reverse the toxic polarization that has sundered American society. Most die-hard Trump supporters have already shown that they will not change their minds under any circumstances.

All the same, getting the economy working again offers the best chance to rescue American democracy. The risk of a little higher inflation is no reason to squander the opportunity.

Daron Acemoglu, professor of economics at MIT, is co-author (with James A. Robinson) of “Why Nations Fail: The Origins of Power, Prosperity and Poverty” and “The Narrow Corridor: States, Societies, and the Fate of Liberty.”

Menzie Chinn: Here’s how to tell if this spurt of inflation is here to stay

Stephen Roach: The ghost of Arthur Burns haunts a complacent Federal Reserve that’s pouring fuel on the fires of inflation

Apple Inc. has scaled back ambitious self-driving plans for its future electric vehicle and postponed the car’s target launch date by about a year to … END_OF_DOCUMENT_TOKEN_TO_BE_REPLACED