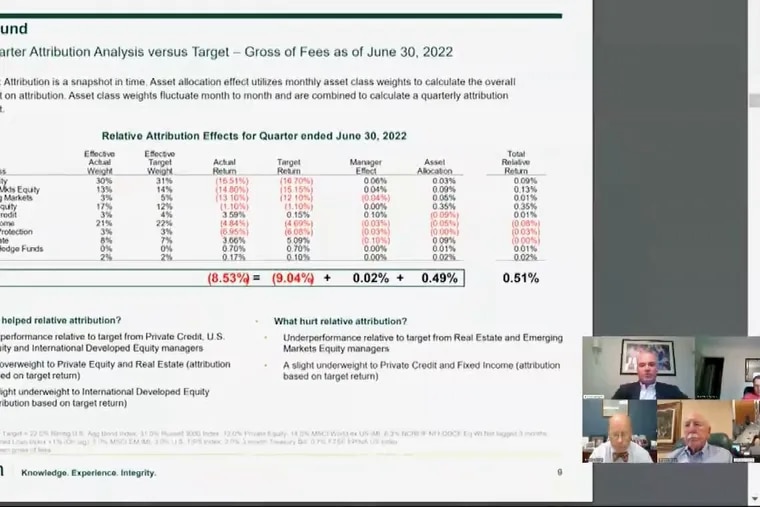 The drop in global stock and bond values has shaved about $3 billion off Pennsylvania’s State Employees’ Retirement System (SERS) during the second quarter, staff and consultants warned trustees in Thursday’s investment meeting.

The fund was worth $34.5 billion at midyear, down from $38 billion three months before, after counting an 8.5% investment loss for the quarter, along with payouts to 130,000 pensioners, and ongoing contributions from taxpayers and 100,000 state workers — lawmakers, judges, college staff, corrections officers, troopers, social workers — who hope to retire someday with pensions from the system.

The fund posted the decline as legislators have been weighing how to cope with pressure to boost pensions for more than 70,000 older state and public school retirees, whose last “cost of living allowance” increases took effect in 2004. Their pension checks, unchanged since that time, are losing pricing power after food, fuel and other prices rose earlier this year at the fastest rate since the early 1980s.

SERS’ U.S., foreign and “emerging market” stocks all fell sharply in the three months ended June 30 (by around 17%, 15% and 13%, respectively). The system’s bonds, though long regarded as a hedge whose value tends to rise when stocks are down, instead lost nearly 5%. And its commodities (whose value SERS ironically reports under the euphemism “Inflation Protection”) were down 7% for the quarter ended June 30, as well.

Private equity investments were down a comparatively modest 1%, while real estate was up nearly 4%. But SERS staff and advisers, led by chief investment officer James Nolan, warned that those asset values, as reported, benefited from accounting practices that tend to delay actual value changes, and warned they would likely lose value later this year.

Left unspoken: the threat that such losses could keep SERS from reaching its yearly investment return target of 7%, potentially requiring an increase in its annual “employer contribution” from taxpayers — currently at $2 billion — to keep its $19 billion assets-to-liabilities deficit from getting bigger.

Nolan blamed falling investment values on “the Russian situation, which is just getting worse,” a reference to the invasion of Ukraine; along with inflation, which he attributed to the government’s high spending during the peak pandemic years; and the Federal Reserve’s rising interest rates, meant to curb price inflation.

The system is dealing with what amounts to a stocks-and-bonds double whammy. Since stocks account for nearly half of SERS’ investments, “we usually rely on (bonds) to move in the opposite direction,” Nolan said. So the drop in the value of existing bonds, as their low yields compare unfavorably to new debt priced at today’s higher interest rates, is an “unfortunate circumstance,” he said.

To be sure, higher bond yields will eventually boost returns, as SERS’ managers buy more of the newer bonds, noted Thomas H. Shingler, of Callan LLC, one of SERS’ investment advisers.

But mostly, “there haven’t been very many places to hide,” Shingler added.

Real estate returns are still “very strong,” and private equity has not lost as much value as public shares — but “we expect those to cool,” he said. Shingler said inflation will likely drive up commodity prices, but warned against betting too much on those “very volatile” assets.

What should SERS do with its available cash? Staff recommended two new investments, both managed by companies that already handle other money for SERS.

This latest Ardian fund is a scavenger among private-equity funds, at a time when many large investors are selling those investments in private companies, to raise cash.

The fund’s strategy, according to its founder, Dominique Senequier, is to buy non-public companies from buyout funds, at bargain discounts, and hold them until they can be sold profitably.

“We are the largest buyer in the market,” Senequier added, “and we focus on the largest transactions,” in Europe and Asia, as well as the U.S.

Compared to other private-equity funds, Ardian “doesn’t have as high-return expectations, but it’s a ‘volatility damper’” whose price is less likely to jump around with the latest market trends, Becker added.

If that sounds like lowered expectations for a tough market, that’s what the board was looking for: Trustees voted unanimously, 11-0, to send Ardian $150 million.

Acknowledging that “real estate may be seeing some tougher times,” Oak Street managing director Gary Rozier assured trustees that the firm has “historically done well in times of disruption,” and that it was a good time to be investing new money in properties.

The team added little detail about the impact on its investments of the U.S. real estate industry’s shift, from the office and retail projects that yielded big profits in the 2010s, to the post-pandemic delivery-service warehouses and apartments, that have lately generated the highest profits and the most investor interest.

The two Republican legislators on the board, which is dominated by appointees and legislative allies of Gov. Tom Wolf, a Democrat, said the presentation wasn’t enough to win their support.

Trustees voted 9-2 to invest $75 million in the new Oak Street fund. Schemel voted no on Oak Street, as did Sen. John DiSanto, R-Dauphin.

The trustees will review those investments and ratify their decisions at SERS’ next regular board meeting, Sept. 29.

Editor’s note: One in a series. Leading up to the Nov. 8 general election, the Appeal-Democrat will be running a series of candidate profiles that … END_OF_DOCUMENT_TOKEN_TO_BE_REPLACED

CNN  —  The lesson of January 6, 2021, is that when extremism, conspiracies and incitement reach a boiling point, they seek an … END_OF_DOCUMENT_TOKEN_TO_BE_REPLACED