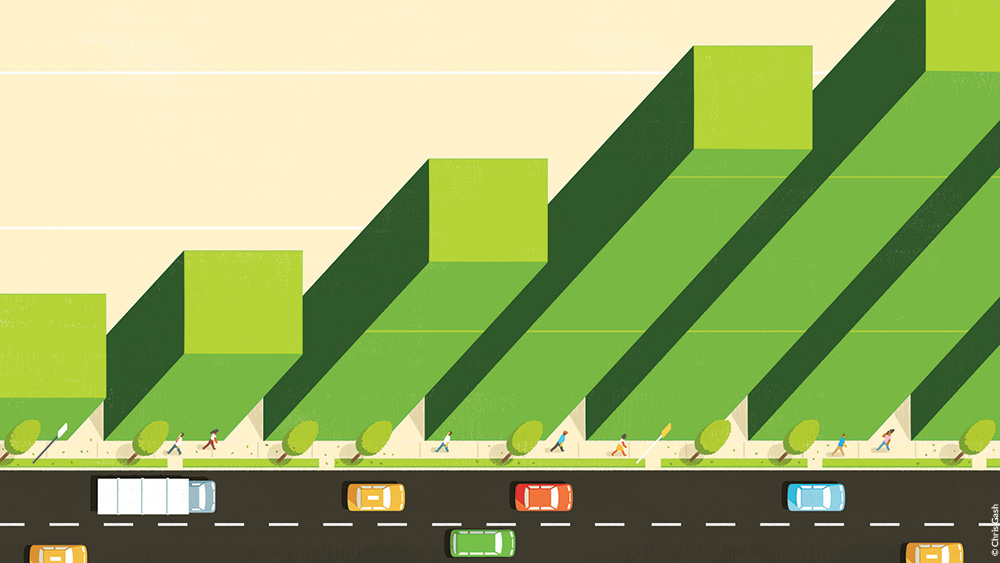 
Then vaccines kicked in, pre-empting much of the feared impact from a longer-haul Covid crisis. Almost as suddenly, multifamily real estate returned to robust health, turning apartment REIT stocks into market leaders.

A growing number of landlords report sharp rebounds in coastal market rents and surging demand in the Sun Belt. In addition, soaring home prices have barred many tenants from home purchases, locking them into renter status.

That has helped drive down the national vacancy rate, as tracked by RealPage, to a historic low below 3%. That’s less than half the 6%-plus rate that prevailed before the pandemic. Nationally, lease rates for new renters rose 18.2% in September vs. the rates of expiring leases, according to RealPage.

The apartment sector turnaround has been faster and stronger than most analysts expected. That has helped drive REIT stock outperformance. Year-to-date total return for apartment REIT stocks in the FTSE Nareit U.S. Real Estate Index equaled 50.9% through Nov. 3 vs. 25.3% for the S&P 500.

Yet shares of a number of the industry leaders remain in buy ranges, or below buy points in bases. That leaves investors opportunities to capitalize on the multifamily-housing strength, which looks poised to run at least through 2022, and possibly beyond.

While rents in some of the hardest-hit coastal cities remain a bit below pre-Covid peaks, they’re seeing a dramatic recovery from pandemic lows. Spot rents are up 28% since Jan. 1 for Equity Residential (EQR), a real estate investment trust with a heavy coastal-market presence. Spot rents factor in the base rate minus the cost of concessions, such as a free 13th month.

The momentum has continued despite some economic headwinds. Employment gains slowed through August and September as the delta variant interrupted the leisure and hospitality sector’s job rebound. Amid a spike in Covid cases nationwide, major employers decided to delay plans to call workers back into offices right after Labor Day.

The story was much the same in the San Francisco Bay Area. Apple (AAPL), Google-parent Alphabet (GOOGL) and Facebook (FB) all delayed their workers’ return until 2022. Still, “there was no swoon” in rent rates and occupancies, Parrell said.

October renewals were approaching 65%, “much better than the 55% historical norm,” Manelis said, with renewal rates 9% above expiring rents. “Perhaps our biggest positive from these negotiations is that so far, we are not seeing any material difference in renewal behaviors from the deal seekers who received very discounted rents last year versus our more tenured residents.”

The industry expects apartment demand, typically fueled by strong income and job growth, to see further increases as workers return to the office in 2022. EQR expects “some of the best same-store revenue numbers we have ever seen” in 2022, Parrell said on the Q3 call.

Upscale apartment operators in the Sun Belt are enjoying boom times, as the Covid-demand rebound combines with longer-term migration trends.

“Our customer base is really, really in good shape,” Camden Property Trust (CPT) CEO Richard Campo told analysts on an Oct. 29 earnings call. “Number one, they’re employed; number two, they have massive savings as a result of the pandemic.”

That cash cushion has encouraged people who lived with their parents or roommates during the pandemic to find their own place. Because of all those factors, “you really have almost three years of demand hitting the market in 2021,” Campo said.

Stock Market ETF Strategy And How To Invest

Camden Property Trust said lease rates ran 16.5% above expiring leases in October, accelerating from 16% in Q3. That reflects both new leases and renewals. Meanwhile, 98.7% of tenants paid their rent during the month, suggesting the end of the eviction moratorium so far poses only moderate risk.

Those metrics underscore the stability of apartment REIT stocks, which tend to cater to upper-middle-income renters. The average Equity Residential renter makes $150,000 a year. Camden property residents have a median age of 30 and average income of $100,000.

At this income level, there seemed to be minimal impact from the end of emergency unemployment benefits, including an extra $300 per week, in most GOP-run states over the summer and nationwide after Labor Day.

Millennial lifestyle choices — such as delaying marriage and kids — provide a strong foundation for apartment REIT stocks and are conducive to living in apartments longer. Nearly 50% of Camden residents live alone.

CPT stock and Mid-America Apartment Communities (MAA) have been pacesetters among apartment REIT stocks this year. CPT stock has gained 60%. Mid-America is up 59%. That owes in part to their industry-leading rent growth.

In a Sept. 13 note, Raymond James analyst James Sullivan upgraded MAA stock to buy from neutral with a 218 price target. Piper Sandler’s Alexander Goldfarb initiated coverage on Oct. 26, with an overweight rating and a 230 price target.

MAA shares were in a buy range on Friday above a 197.60 buy point, according to IBD MarketSmith analysis. CPT stock dipped back into its buy range after clearing a flat base buy point at 154.15 in mid-October. Both bases are second-stage patterns, suggesting the stocks may still have room to run.

Shares of Equity Residential are pulled back narrowly below an 86.14 entry in a six-week cup base. The stock is up a bit more than 42% since the start of the year. UDR (UDR), up more than 42% this year, has also dropped back below a buy point at 56.49.

And after running up almost 47% this year, AvalonBay Communities (AVB) remains in a buy range that runs to 245.26. Centerspace (CSR), sitting on a 43% year-to-date gain, is coiled neatly below a 104.75 buy point in a cup-with-handle base.

Sullivan had expected the surge in new lease rates vs. a year ago to begin to narrow this summer in Sun Belt markets, he told IBD. Those markets “didn’t have the really weak results” in 2020, so they faced tougher year-over-year comparisons. Sullivan had also expected a “significant increase in single-family housing this year.”

“But what’s happened is there have been problems meeting delivery schedules” amid construction trade labor and materials shortages. Raymond James thinks the housing market’s supply chain woes may not be fully corrected until 2023, providing ongoing support for apartment prices.

Sullivan also upgraded UDR to buy with a 60 price target. He maintained buy ratings and bumped up targets for a few other REIT stocks. They include AvalonBay, with a coastal focus, and Centerspace, which operates in five Great Plains states.

Keep in mind that comparing REIT stocks with other equities isn’t apples-to-apples. What are the key differences?

REITs don’t pay corporate taxes. To bypass the corporate income tax, REITs must distribute at least 90% of taxable income to shareholders as dividends. Those aren’t “qualified dividends,” which are taxed as capital income, but are instead taxed as regular income. That matters if the stocks aren’t held in a tax-advantaged retirement account.

Even key earnings metrics differ. Instead of EPS, REIT stocks report FFO, or funds from operations, on a per-share basis. FFO takes net operating income and adjusts it for depreciation, amortization and asset sales.

Hot Sun Belt apartment markets are drawing lots of interest from REITs focused on other geographies, as well as from private equity firms. That’s created something of a bidding war for multifamily housing properties.

EQR, which exited the Atlanta market a decade ago, recently bought two properties in the city. The latest is a $122 million deal for the just-built five-story Luna Upper Westside building, weighing in at nearly $354,000 per unit.

Mid-America Apartments has a similar project scheduled for delivery in early 2023. “Exact same market, exact same type of product,” with an all-in cost of $260,000 per unit, CEO Eric Bolton told the BofA conference.

Get Alerts To Stocks Near Buy Points With IBD SwingTrader

That’s the advantage of being in Sun Belt markets for 27 years and having seasoned development teams on the ground. Bolton said MAA continues “to find opportunities” and is optimistic about being able “to capture good growth” on a disciplined basis.

So does EQR’s approach of paying high to get into hot markets make sense? Keep in mind that EQR isn’t just buying. It’s also selling assets. That includes some needing major renovation, in markets where the company wants to lighten its load as it shifts its geographic profile. “We’re selling out of those assets at prices we never imagined,” Parrell said.

EQR also has established a partnership with luxury homebuilder Toll Brothers to develop $1.9 billion in new rental communities in Atlanta, Dallas and Austin, as well as other markets. Toll Brothers will manage the developments. EQR provides 75% of the financing.

The macro and demographic trends propelling apartment REIT stocks are all good news for Walker & Dunlop (WD). A rally of 27% since clearing a 114.87 buy point on Oct. 1 has left WD stock extended. Although not a REIT stock, WD is the largest provider of capital for multifamily housing.

“Really younger people who stayed living with their parents are moving out,” said Don King, executive vice president of Walker & Dunlop’s multifamily finance team. Yet renters age 30 to 35 are having to stay put because spiraling prices have pushed single-family homes past the point of affordability.

With “less construction throughout the pandemic,” multifamily housing should remain tight for a while, he said.

That’s especially the case with affordable housing. King says a bigger government tax subsidy is needed to address the shortage. He added that the Biden administration appears to be moving in that direction after a June Supreme Court ruling cleared the way for the dismissal of Mark Calabria, the Trump-era director of the Federal Housing Finance Association.

Walker & Dunlop is in prime position to seize that opportunity after its $700 million purchase of Alliant Capital announced in August. The alternative investment manager, among the biggest syndicators of low-income housing tax credits to developers and investors, has $14 billion in affordable housing assets under management.

The Bethesda, Md., company’s first-half quarterly numbers were lumpy before a strong Q3, due to a slow start to the year in Fannie Mae and Freddie Mac multifamily mortgage originations. But Walker & Dunlop’s revenues were strong “in the right places,” wrote Wolfe Research analyst Andrew Rosivach wrote after the August Q2 report. He noted that property sales broker fees grew 531% from a year ago, evidence that “WD is doing an excellent job expanding this business line.”

“Our automated appraisal business, Apprise, is another example of where our focus on technology will scale a new business and pull market share from our largest competitors,” CEO Willy Walker said on the Q2 call.

These Are The Best Growth Stocks To Buy And Watch

Why This IBD Tool Simplifies The Search For Top Stocks

Columbia University will not participate in the next U.S. News & World Report rankings of colleges across the country, after a Columbia math professor … END_OF_DOCUMENT_TOKEN_TO_BE_REPLACED