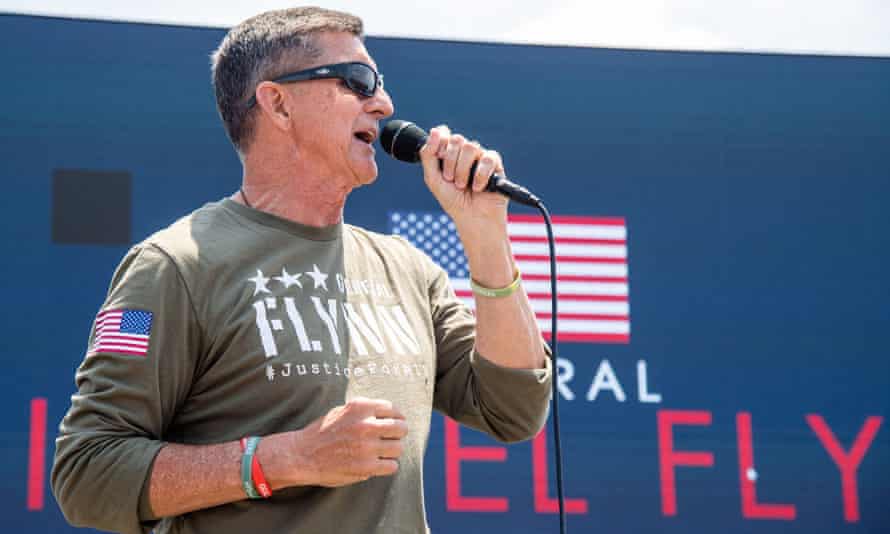 A growing number of prominent Christian leaders are sounding alarms about threats to democracy posed by ReAwaken America rallies where Donald Trump loyalists Michael Flynn and Roger Stone and rightwing pastors have spread misinformation about the 2020 elections and Covid-19 vaccines, and distorted Christian teachings.

The falsehoods pushed at ReAwaken gatherings have prompted some Christian leaders to warn that America’s political and spiritual health is threatened by a toxic mix of Christian nationalism, lies about Trump’s loss to Joe Biden, and ahistorical views of the nation’s founding principle of the separation of church and state.

Several well-known Christian leaders, including the president of the Christian social justice group Sojourners and the executive director of a major Baptist group, have called on American churches to speak out against the messages promoted at ReAwaken America rallies that have been held in Oklahoma, Arizona, Texas, California, South Carolina and other states.

Other tour rallies, some of which have been held in religious spaces, are slated for New York and Virginia this summer and some local Christian leaders are being encouraged to publicly voice concerns about the dangerous rhetoric and messages they convey.

“This ReAwaken tour is peddling dangerous lies about both the election and the pandemic,” Adam Russell Taylor, the president of Sojourners, told the Guardian. “Jesus taught us that the truth will set us free, and these lies hold people captive to these dangerous falsehoods. They also exacerbate the toxic polarization we’re seeing in both the church and the wider society.”

Taylor added he was deeply concerned about “a conflation between Christianity and a nationalistic form of patriotism” at the “tour rallies which are promoting a more overt form of Christian nationalism”.

She added: “The ReAwaken America tour is a gross distortion of Christianity and it’s up to Christian leaders in the areas the tour visits to speak out against this ideology.”

The ReAwaken tour’s pro-Trump political messages mixed with Christian nationalism was on display at a two-day gathering in Myrtle Beach, South Carolina, in May that drew Flynn, Stone, Eric Trump and the rightwing pastor Mark Burns, who is running for a House seat in the state.

Stone revved up the crowd with at times bizarre conspiratorial claims. “There is a satanic portal above the White House, you can see day and night. It exists. It is real. And it must be closed. And it will be closed by prayer,” he said.

The “portal”, Stone told a rapt crowd, first appeared after Joe Biden “became president and it will be closed before he leaves”. Stone, a longtime Trump confidant, was convicted on three counts including obstruction during the Russia meddling investigations, but he was pardoned in late 2020 by Trump, who had earlier commuted his sentence.

Burns, an ardent Trump backer, drew applause at the rally with blistering attacks on the LGBTQ community, top congressional Democrats, and even the GOP senator Lindsey Graham, a strong Trump ally.

Known for his penchant for mixing religious messages with politics, Burns told another ReAwaken meeting in Ohio in February that God would “raise up armies” to help conservatives “shut down” Democratic-run America.

But retired Lt Gen Flynn, a staunch ally of Trump’s who told the rightwing network Newsmax in December 2020 that Trump should deploy the military to “rerun the election” in swing states Biden won, is the tour’s most highly promoted draw.

At a ReAwaken event in Texas in November, for instance, Flynn sparked strong criticism by claiming that America should have just “one religion”.

At the South Carolina rally, Flynn proclaimed that the US has a “biblical destiny”, and posited that the US was built on a “set of Judeo-Christian principles”.

The ReAwaken tour was launched by a conservative Oklahoma talkshow host and entrepreneur named Clay Clark in tandem with Flynn, who briefly served as Trump’s first national security adviser. Flynn pleaded guilty twice to lying to the FBI about contacts he had with Russia’s ambassador before Trump took office, but in late 2020 Trump pardoned him.

The Trump loyalist and multimillionaire Patrick Byrne, the former CEO of Overstock, told the Guardian last year the America Project, an advocacy group he founded that boasts Flynn as a special adviser and spokesman, put up “tens of thousands of dollars” to help launch the rallies in 2021, and that he has attended some himself.

Flynn’s central role at the ReAwaken events was cited in a hard-hitting April op-ed in the Times of San Diego by the Rev Melinda Teter Dodge.

“Tragically, late last month, proclaimed church leaders and religious zealots descended upon San Diego county, and twisted this scriptural truth for specific political purposes. In speaking to thousands of vulnerable attendees, this group spewed dangerous falsehood after falsehood about Covid-19 and the 2020 election,” she wrote.

“The event at a church in San Marcos was the latest stop on disgraced, retired General Michael Flynn’s ‘ReAwaken America Tour,’ a nationwide series of megachurch engagements featuring a who’s who of far-right religious extremists, Trump aides, QAnon conspiracy theorists, and other reckless figures. At every stop along the way, the Christian nationalist tour has left in its wake a trail of dangerous disinformation that leads to bigotry, hate, and, at its most extreme, violence.”

Teter Dodge added that a “staple” of the tours has been Pastor Greg Locke, “who has made a name for himself by peddling QAnon conspiracy theories from his pulpit, and even kicking people out of his church if they wore a mask. More recently, Locke has taken up the latest cause célèbre among the radical far-right – book burning.”

Looking ahead to the fall elections, Taylor of Sojourners worries that the rhetoric of the ReAwaken events threatens voting rights.

Taylor said he was “particularly alarmed by the ways this tour is promulgating and providing religious cover to the big lie that the last election was stolen. This big lie is eroding trust in elections and being exploited to justify and fuel efforts to erect new barriers across the country that restrict the right to vote.”

Columbia University will not participate in the next U.S. News & World Report rankings of colleges across the country, after a Columbia math professor … END_OF_DOCUMENT_TOKEN_TO_BE_REPLACED

It is likely that the Financial Crimes Enforcement Network (FinCEN) will put forth new regulations this year addressing real estate transactions. A … END_OF_DOCUMENT_TOKEN_TO_BE_REPLACED