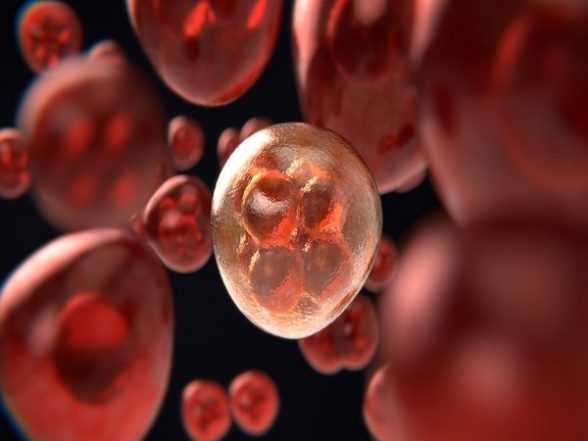 Washington [US], July 12 (ANI): During a recent study, researchers identified a specialised protein that appears to help prevent tumour cells from entering the bloodstream and spreading to other parts of the body.

The findings, published in Science Advances, help shed light on a little-understood part of metastasis called intravasation when cancer cells that have separated from a primary tumour enter the circulation in order to travel to other parts of the body and establish colonies.

“We have discovered that this protein, TRPM7, senses the pressure of fluid flowing in the circulation and stops the cells from spreading through the vascular system,” said Kaustav Bera, a Johns Hopkins University PhD candidate in chemical and biomolecular engineering and a lead author of the study, which was done with colleagues at the University of Alberta and Universitat Pompeu Fabra.

“We found that metastatic tumour cells have markedly reduced levels of this sensor protein, and that is why they efficiently enter into the circulation rather than turning away from fluid flow,” said Bera.

The researchers further showed that artificially increasing the expression of TRPM7 in tumour cells may help stop intravasation–and ultimately metastasis–in its tracks.

TRPM7 has long been known to regulate calcium in cells, but this new insight into its role in cell migration is exciting, according to researchers. “The process is akin to what happens when you touch a hot kettle, feel it’s hot, and remove your hand,” said senior study author Konstantinos Konstantopoulos, a professor of chemical and biomolecular engineering and member of the Johns Hopkins Kimmel Cancer Center.

The protein senses the flow of the fluid in the circulatory system and instructs the cell to reverse direction, thereby inhibiting intravasation, he said.

Typically, the cells in the human body–for example, muscle cells, fat cells, and epithelial cells–stay contained in their respective regions. The major exception are blood cells, which patrol the body fighting pathogens. And then there are cancer cells, which have mutations that allow them to travel and spread.

It is at this point of spreading that cancer becomes much more dangerous. “Many people will be diagnosed with a primary tumor, but as long as this tumor is contained, a surgical procedure can save the person,” said Christopher Yankaskas, a lead author and former member of Konstantopoulos’s lab who is now a scientist at Thermo Fisher Scientific.

For their initial experiment, the researchers observed healthy fibroblast cells moving through microchannels arranged perpendicularly in a ladder-like configuration in which the fluid could be controlled. When these cells encountered channels where fluid was moving, they reversed their direction in response to the shear stress exerted from the flow. However, when the cells encountered channels where fluid wasn’t moving, they proceeded into them.

The researchers then used a process known as RNA interference to block the cells from expressing TRPM7. What they observed was striking, they say. When this sensor protein was disabled, the healthy cells no longer reversed direction in response to the flow. “Imagine you then pick up the kettle with an oven mitt, which reduces your sensitivity to the heat,” said Konstantopoulos.

In subsequent experiments, the researchers found that normal cells had higher levels of TRPM7 than sarcoma cells (a type of cancerous tumour cells) and that artificially expressing the protein in the tumour cells increased their sensitivity to the fluid flow.

When the normal cells reverse their direction of migration, they avoid exposure to shear stress, but this is not the case for tumour cells, explained Konstantopoulos. “The tumour cells are less sensitive, and that’s why they continue entering the circulatory system.”

“The goal was to see if we could take these cancerous cells and make them behave like normal cells,” said Bera. “And we managed to do that.”

A separate analysis of human patient data showed that those with osteosarcoma, breast, gastric, and liver cancer who expressed high levels of TRPM7 were more likely to live longer than those with lower levels of the protein.

“We’ll need further developments before we can take this to the clinical setting, but we believe we provide, for the first time, a definitive picture of the role of TRPM7 in a crucial step of tumour metastasis,” said Konstantopoulos. (ANI)

Insiders who purchased US$162k worth of Compass, Inc. (NYSE:COMP) shares over the past year recouped some of their losses after price gained 14% last … END_OF_DOCUMENT_TOKEN_TO_BE_REPLACED