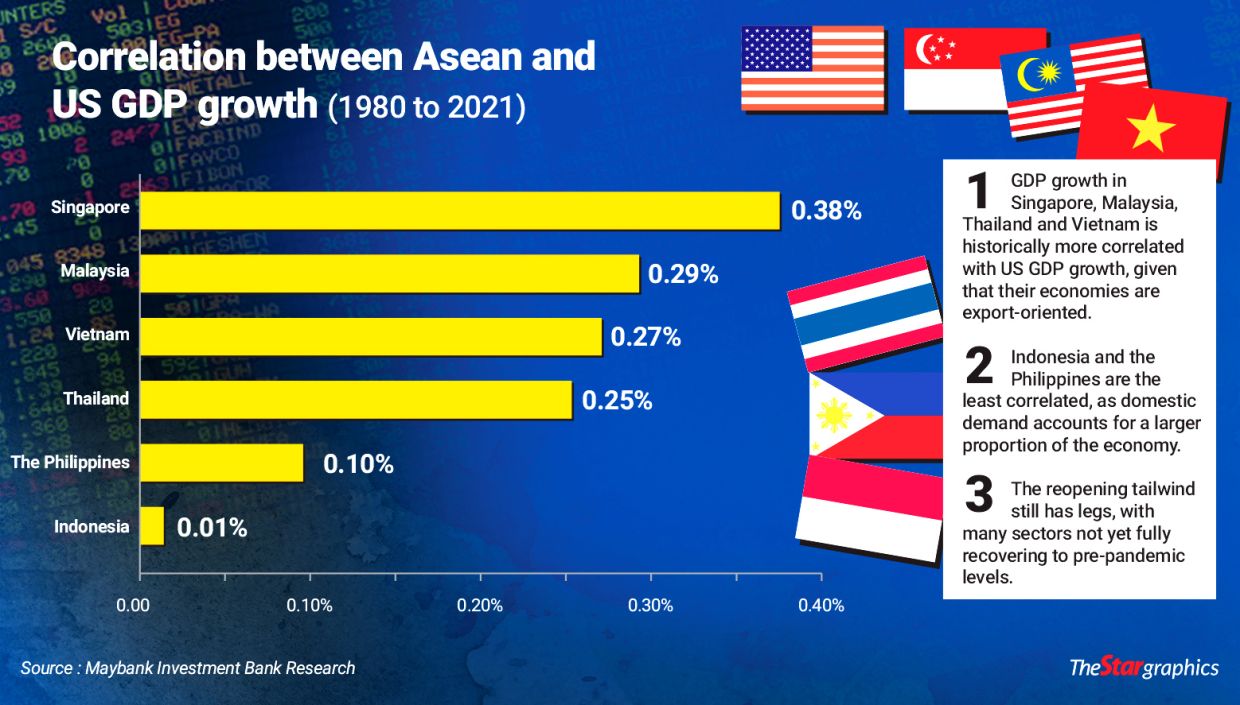 PETALING JAYA: Asean economies, including Malaysia, are experiencing a “partial decoupling’’ from the world’s largest economic powerhouse, the United States.

Maybank IBG Research laid out six arguments in its latest report, highlighting that Asean economies were becoming less exposed to the US economic downturn and potential recession.

Pointing out that Asean was emerging as a defensive harbour, it said the cumulative gross domestic product (GDP) of Malaysia, Thailand, Indonesia and the Philippines is expected to remain resilient and expand by 5.3% in the second half of 2022 and 4.9% in 2023, despite slowing US and global growth.

Maybank IBG Research also said that the probability of a US recession over the next 12 months has risen to 26%, based on the three-month and 10-year bond term spread.

“The US recession is likely to be shallow rather than deep, cushioned by labour shortages in reopening sectors and healthier household and corporate balance sheets,” it added.

The research house noted that the GDP growth in Singapore, Malaysia and Thailand has been historically more correlated with US business cycles, as their economies are more export-oriented, while GDP growth in Indonesia and Philippines are far less correlated.

“Vietnam did not slip into recession in past US recessions, but the correlation and dependence on US value-added have risen over the past decade.

“Singapore remains the most vulnerable to a US recession, although the reopening tailwinds, recovery in foreign employment; relocation of headquarters, talent and capital inflows from Hong Kong and China, and available fiscal support are mitigating factors,” it said.

According to Maybank IBG Research, Asean’s growth has been more resilient than the United States, European Union (EU) and China in the first half of 2022 (1H22).

The four economies’ growth overtook and was more than double China’s GDP growth, which slowed to 2.6%.

“The Asean-China growth divergence will likely continue in the second half given the divergent ‘living with’ versus ‘dynamic zero’ Covid-19 strategies,” stated Maybank IBG Research.

Elaborating on why it thinks Asean is partially decoupling from the US economy, one of Maybank IBG Research’s arguments is that foreign direct investment (FDI) into Asean is rising.

It said the stronger FDI is on the back of the reconfiguration and shift of manufacturing supply chains into Asean, as reflected in the surging applications in Indonesia, Malaysia and Vietnam.

“The US-China trade war, the pandemic, and China’s zero-Covid strategy and rolling lockdowns are reinforcing the case for diversification and ‘China+1’ supply chains,” according to the research house.

Meanwhile, the relocation of headquarters and talent from Hong Kong, as well as capital inflows from Greater China because of US-China geopolitical rivalry and divergent Covid-19 strategies, has triggered the Asean-US partial decoupling.

Another argument on the Asean-US decoupling is about the benefits enjoyed by Asean economies from elevated energy and food prices.

Maybank IBG Research also said that the decoupling is happening because of the “reopening boost” that is still not over in Asean.

It pointed out that accommodation and food services, construction and air transport industries remain below pre-pandemic levels, and these sectors will continue to recover from the reopening tailwinds.

In Malaysia, the agriculture sector is slightly below the pre-pandemic level, while the construction sector continues to lag behind.

Another reason for the partial Asean-US decoupling is the less aggressive interest rate hiking cycle, except in the Philippines and Singapore.

“Monetary policy tightening in most of Asean – except Singapore and the Philippines – has not been as aggressive as other emerging markets.

“Core inflation – which excludes energy and food prices – has not risen as sharply which has allowed the Asean central banks to be more measured in their interest rate hikes,” stated the research house.

In Malaysia, for example, Bank Negara has hiked the overnight policy rate by 50 basis points (bps) so far, while the central banks of Thailand and Indonesia only started hiking by 25 bps in their recent August meetings.

Vietnam’s central bank has yet to start raising policy rates, but it has maintained a conservative credit growth cap for this year.