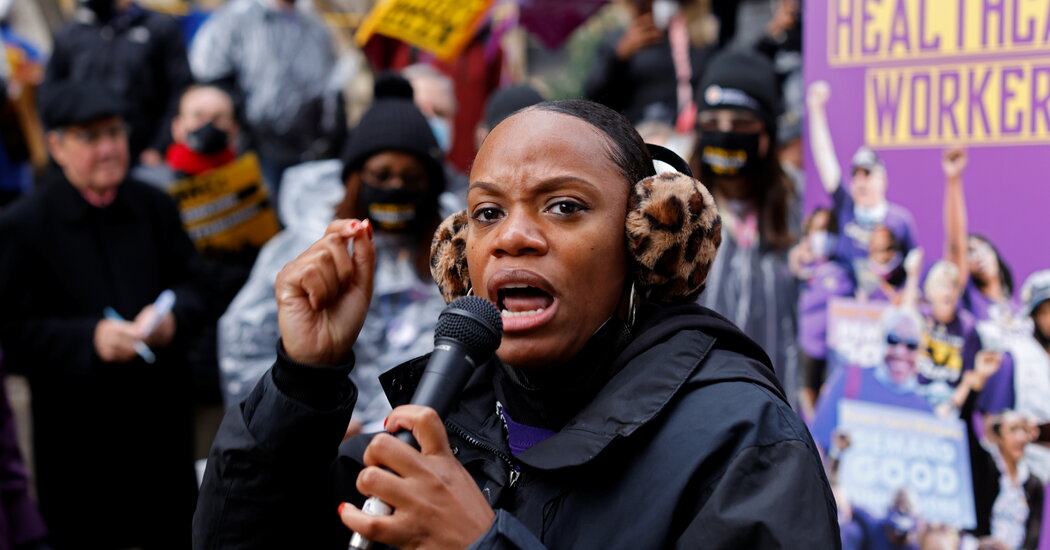 The Democratic primary in North Carolina’s first congressional district had been a low-key affair, despite a new Republican-drawn map that will make the longtime stronghold for Black Democrats a key battleground in the fall.

Then the Supreme Court’s draft decision that would overturn the constitutional right to an abortion was leaked, thrusting a searing issue to the forefront of the contest. Now, voters in North Carolina’s northeast will choose sides on Tuesday in a proxy war between Erica Smith, a progressive champion of abortion rights with a wrenching personal story, and Donald Davis, a more conservative state senator with the backing of the establishment who has a record of votes against abortion rights.

“There’s a political imperative for Democrats to have pro-choice nominees this cycle,” said Ms. Smith, a pastor and former state senator who was once given a choice between ending a pregnancy or risking her own life to deliver a dangerously premature baby. She chose to give birth, only to lose the child tragically five years later, but said she would never take that choice away from a woman in her circumstances.

Around the country — from South Texas to Chicago, Pittsburgh to New York — the looming loss of abortion rights has re-energized the Democratic Party’s left flank, which had absorbed a series of legislative and political blows and appeared to be divided and flagging. It has also dramatized the generational and ideological divide in the Democratic Party, between a nearly extinct older wing that opposes abortion rights and younger progressives who support them.

President Biden and Democrats in Congress have told voters that the demise of Roe means that they must elect more “pro-choice” candidates, even as the party quietly backs some Democrats who are not.

The growing intensity behind the issue has put some conservative-leaning Democrats on the defensive. Representative Henry Cuellar of Texas, the only House Democrat to vote against legislation to ensure abortion rights nationwide, insisted in an ad before his May 24 runoff with Jessica Cisneros, a progressive candidate, that he “opposes a ban on abortion.”

Candidates on the left say the potential demise of Roe shows that it’s time for Democrats to fight back.

“We need advocates. We need people who are going to work to change hearts and minds,” said Maxwell Alejandro Frost, who, at 25 years old, is battling an established state senator 20 years his senior, Randolph Bracy, for the Orlando House seat that Representative Val Demings is leaving to run for the Senate.

Kina Collins, who is challenging longtime Representative Danny Davis of Chicago from the left, said, “We came in saying generational change is needed,” adding, “We need fighters.”

But the youthful candidates of the left will have a challenge exciting voters who feel as demoralized by the Democrats’ failure to protect abortion rights as they are angry at Republicans who engineered the gutting of Roe v. Wade.

From Opinion: A Challenge to Roe v. Wade

Summer Lee, a candidate for an open House seat in the Pittsburgh area, pressed the point that in states like Pennsylvania the future of abortion rights will depend on governors, and “the only way we’re going to win the governor’s seat in November is if, in crucial Democratic counties like this one, we put forth inspiring and reflective candidates that can expand our electorate up and down the ballot to turn out voters.”

There is little doubt that the draft Supreme Court decision that would end the 50-year-old constitutional right to control a pregnancy has presented Democrats with a political opportunity in an otherwise bleak political landscape. Republicans insist that after an initial burst of concern the midterms will revert to a referendum on the Democrats’ handling of pocketbook issues like inflation and crime.

But the final high court ruling is expected in June or July, another jolt to the body politic, and regardless of how far it goes, it is likely to prompt a cascade of actions at the state level to roll back abortion rights.

Women would be confronted with the immediate loss of access that would ripple across the nation, said Celinda Lake, a Democratic pollster who has been studying what she calls a “game-changing” political event.

And while Republican consultants in Washington are telling their candidates to lay low on the issue, some of the candidates have different ideas. Three contenders for attorney general in Michigan suggested at a forum that the right to contraception established by the Supreme Court in 1965 should be decided on a state-by-state basis, assertions that Dana Nessel, Michigan’s Democratic attorney general, latched onto in her re-election bid.

Yadira Caraveo, a pediatrician and Democratic state lawmaker in Colorado running for an open House seat, is already being attacked by a would-be Republican challenger, Lori Saine, who is proclaiming herself as “strongly pro-life” and seeking to “confront and expose these radical pro-abortion Democrats.”

“They’ve already shown they can’t keep away from these issues,” Ms. Caraveo said, adding, “I want to focus on the issues that matter to people, like access to medical care and costs that are rising for families every day.”

For liberal candidates in primary contests, the timing of the leak is fortuitous. Their calls for a more confrontational Democratic Party are meshing with the inescapable news of the looming end to Roe v. Wade and the Democratic establishment’s futile efforts to stop it.

That is especially true for women of childbearing age. This week, five Democratic candidates squared off at a debate ahead of Tuesday’s primary for the House seat in Pittsburgh. Ms. Lee, the candidate aligned with the House Progressive Caucus, was the only woman on the stage. After one of her male rivals worried aloud about a post-Roe world for his daughters, she made it personal. She was the only one in the race directly impacted.

“Your daughters, your sisters, your wives can speak for themselves,” she said.

Ms. Cisneros, the liberal insurgent in South Texas challenging the last Democratic abortion rights opponent in the House, Mr. Cuellar, appeared to have a steep uphill battle in March after she came in second in the initial balloting, with Mr. Cuellar’s seasoned machine ready to bring out its voters for what is expected to be a low-turnout runoff on May 24.

The State of Roe v. Wade

What is Roe v. Wade? Roe v. Wade is a landmark Supreme court decision that legalized abortion across the United States. The 7-2 ruling was announced on Jan. 22, 1973. Justice Harry A. Blackmun, a modest Midwestern Republican and a defender of the right to abortion, wrote the majority opinion.

What was the case about? The ruling struck down laws in many states that had barred abortion, declaring that they could not ban the procedure before the point at which a fetus can survive outside the womb. That point, known as fetal viability, was around 28 weeks when Roe was decided. Today, most experts estimate it to be about 23 or 24 weeks.

What else did the case do? Roe v. Wade created a framework to govern abortion regulation based on the trimesters of pregnancy. In the first trimester, it allowed almost no regulations. In the second, it allowed regulations to protect women’s health. In the third, it allowed states to ban abortions so long as exceptions were made to protect the life and health of the mother. In 1992, the court tossed that framework, while affirming Roe’s essential holding.

Progressive priorities such as defunding the police and providing Medicare for all have come under deep suspicion, with even Mr. Biden casting doubts on them.

Ms. Smith’s story is gut-wrenching. She had two sons, aged 10 and 12, and another on the way when her doctors informed her of severe complications with her pregnancy. She could abort, or try to hold on until the fetus was closer to viability — and risk her life.

She held on, and Rhema Elias was born at 24 weeks, a pound and a half ounce. He spent six months in the neonatal intensive care unit, and went home with lingering complications that required special feeding care and a tracheostomy. He died at age five and a half.

Now campaigning, she tells voters she would make the choice again but could not imagine a world where a woman facing the same situation would have no choice.

Many voters are angry and scared at the prospect of a wave of new laws making abortion illegal in a post-Roe America. The question is whether those voters will come out for Democratic candidates espousing abortion rights or stay home, furious at Republicans but disenchanted with the ineffectual Democratic Party.

Waleed Shahid, a strategist and spokesman for Justice Democrats, an insurgent liberal organization that supports progressive primary challengers, said his own parents did not bother to vote in the Virginia governor’s race last year, declaring that Democratic control had changed nothing.

“We’re stuck,” he said, “A sense of powerlessness leads to apathy, and apathy is the Republicans’ stamping grounds.”

“Democrats have to articulate that there is something we can do about it: Get people on record, frame out the decision in November and elect more Democrats,” she said. “I think that’s going to energize voters.”

BUFFALO, N.Y. (AP) — Mourners laid to rest the last of 10 Black people killed in a racist attack at a Buffalo supermarket with a service on Saturday … END_OF_DOCUMENT_TOKEN_TO_BE_REPLACED