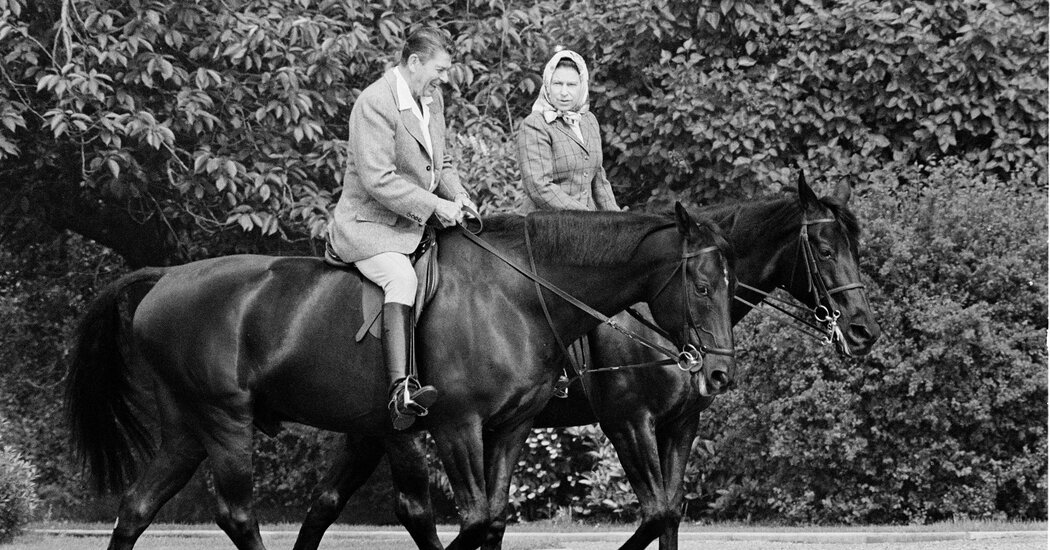 WASHINGTON — They danced with her, rode horses together and went for a boat ride or a picnic. They took her to church or a baseball game. They hosted her or were hosted by her for gala dinners and receptions. Most of all, they basked in her global prestige and historical majesty.

Queen Elizabeth II met 13 sitting presidents of the United States during her long life, which has to be some kind of record, not to mention a test of diplomatic fortitude. Just when she broke in one, another would come along and she would dutifully roll out the red carpet or buckle up on her royal jet for yet another visit to the White House.

The queen’s myriad encounters with presidents over the last seven decades, though, provided a regular tableau of the enduring British-American relationship, a symbol of the powerful bond between the onetime colonial power and the breakaway nation on the other side of the ocean. While Americans cast off the rule of the monarchy, many still revered it, and there was always something grand when a president met the queen.

She personally knew all of them from Harry S. Truman to Joseph R. Biden Jr., with the lone exception of Lyndon B. Johnson. And while she surely preferred some over others, she was gracious and welcoming to all, forgiving protocol mistakes and inspiring Republicans and Democrats alike. For each president, meeting the queen was typically a high point of their tenure, in some ways a validation of their stature on the world stage.

“You really made it when you welcomed the queen to your home,” said Alvin S. Felzenberg, a presidential historian who worked in the administrations of George H.W. Bush and George W. Bush. “You have really made it when she comes to visit you and talks to the American people about the bonds between the two countries. I think they all thought that.”

Her last president was Mr. Biden, who first met her as a senator in 1982 and visited her last year as America’s chief executive. “I don’t think she’d be insulted, but she reminded me of my mother in terms of the look of her and just the generosity,” he said at the time.

Mr. Biden was not the only one to see her in maternal terms. The queen “reminded me of my own mother in her appearance, politeness and reserve,” Hillary Clinton observed in one of her memoirs. Michelle Obama, for her part, said the queen “reminded Barack of his no-nonsense grandmother.”

The first time Elizabeth shared a room with a president, she was not yet queen and the American in question was not yet president. One day during World War II, when Gen. Dwight D. Eisenhower came to Windsor Castle for a tour, the young princess and other family members, including her father, King George VI, playfully ducked under a table until the visiting American party left.

She met Truman before her coronation as well. In 1951, she and her husband Prince Philip stayed with the Trumans at Blair House, where they were living during a White House renovation. Truman called them a “wonderful young couple who have so completely captured the hearts of all of us.”

She became queen in 1952, near the end of Truman’s term. Five years later, she was reunited with Eisenhower in a more formal way when she visited the United States and stayed at the White House with the president for four days, going to church with him and charming his grandchildren. “This was one ceremonial visit that we were sorry to see end,” Eisenhower later reported.

A historic visit. On May 18, 1965, Elizabeth arrived in Bonn on the first state visit by a British monarch to Germany in more than 50 years. The trip formally sealed the reconciliation between the two nations following the world wars.

First grandchild. In 1977, the queen stepped into the role of grandmother for the first time, after Princess Anne gave birth to a son, Peter. Elizabeth’s four children have given her a total of eight grandchildren, who have been followed by several great-grandchildren.

Princess Diana’s death. In a rare televised broadcast ahead of Diana’s funeral in 1997, Queen Elizabeth remembered the Princess of Wales, who died in a car crash in Paris at age 36, as “an exceptional and gifted human being.”

A trip to Ireland. In May 2011, the queen visited the Irish Republic, whose troubled relationship with the British monarchy spanned centuries. The trip, infused with powerful symbols of reconciliation, is considered one of the most politically freighted trips of Elizabeth’s reign.

Breaking a record. As of 5:30 p.m. British time on Sept. 9, 2015, Elizabeth II became Britain’s longest-reigning monarch, surpassing Queen Victoria, her great-great-grandmother. Elizabeth was 89 at the time, and had ruled for 23,226 days, 16 hours and about 30 minutes.

Marking 70 years of marriage. On Nov. 20, 2017, the queen and Prince Philip celebrated their 70th anniversary, becoming the longest-married couple in royal history. The two wed in 1947, as the country and the world was still reeling from the atrocities of World War II.

When he visited her in England two years later, she showed him her Balmoral estate, personally taking the wheel of her station wagon and cooking scones over a charcoal burner at a lakeside picnic. Eisenhower liked them so much he asked for the recipe, which she later sent.

The queen hosted John F. Kennedy and Jacqueline Kennedy for a state dinner at Buckingham Palace in 1961, bringing together American political royalty with its British counterpart. The president had met the future queen when his father, Joseph Kennedy, was ambassador to Britain, while the first lady had covered Elizabeth’s coronation as a young journalist for the Washington Times-Herald.

Although the queen never met Johnson while he was in office, a time of tension between Washington and London over the Vietnam War, she hosted Richard M. Nixon in 1969 shortly after he became president.

She came to Washington in 1976 to celebrate the United States’ bicentennial and danced with Gerald R. Ford at the White House. In a gaffe, they happened to take the floor at the moment the Marine Band was playing “The Lady Is a Tramp,” which caused plenty of awkward chagrin.

But the queen had a sense of humor. When she met Jimmy Carter, she joked that she needed to watch her waist because she had seven different tunics to wear as commander of various guards and she did not want to have to get new ones. But he reportedly left sour feelings by greeting the queen mother with a kiss instead of a bow.

Ronald Reagan delighted in the queen more than most. He loved horseback riding with her and described his visit to Windsor Castle in his diary as “a fairy tale experience.” Like other presidents, including the Bushes, Reagan was said to be distantly related to the queen.

The elder Bush in 1991 hosted one of the more memorable state visits for the queen. When she took the podium, no one had taken account of her short stature, so her face was hidden from television cameras by the microphone and all anyone could see was the bright purple hat she was wearing. It came to be called the Talking Hat Speech.

At the state dinner, the queen met the president’s eldest son. Still in his younger scamp days, George W. Bush lifted his pant leg to show off his cowboy boots and proudly declared that he was the black sheep of the family. “Do you have any in yours?” he asked. His father, though, was determined to give the queen a down-to-earth experience to match the grandiose White House dinner, so he took her to see the Baltimore Orioles.

When Bill Clinton was president, the queen laughed at his stories and probed him for insights on world affairs without betraying her own political views, which would be taboo for the monarch. “Her Majesty impressed me as someone who, but for the circumstance of her birth, might have become a successful politician or diplomat,” Mr. Clinton wrote in his memoir. “As it was, she had to be both, without quite seeming to be either.”

The younger Bush then met the queen again when he became president. Welcoming her in 2007 to mark the 400th anniversary of the Jamestown settlement, he said, “You helped our nation celebrate its bicentennial in 17 — ” He caught himself before finishing the date as 1776, when of course he meant 1976.

The queen, then 81, noticed the slip. “She gave me a look that only a mother could give a child,” Mr. Bush noted wryly. At a dinner at the British Embassy the next night, she said, “I wondered whether I should start this toast by saying, ‘When I was here in 1776.’”

Mr. Bush was not the last resident of the White House to have a gaffe during a meeting with the queen. When Mrs. Obama affectionately put her arm around the queen’s shoulder, an uproar ensued, although Elizabeth did not seem to mind since she put her arm around the first lady. “She showed me that humanity is more important than protocol or formality,” Mrs. Obama later wrote.

Donald J. Trump similarly set social media ablaze when he walked in front of the queen while inspecting an honor guard. Mr. Trump was particularly anxious to meet the queen, noting that his Scottish-born mother admired her. He wanted some sort of public display different than his predecessors had, prompting his staff to compile charts about past presidential meetings with the queen.

“Trump was clearly an admirer himself and was always slightly awe-struck when he talked about her — his voice and his face would soften,” Fiona Hill, who managed Europe relations on Mr. Trump’s National Security Council staff, recalled in her book. “A meeting with the queen of England was the ultimate sign that he, Trump, had made it in life.”

By the time Mr. Biden arrived in London last year, the queen had been through the ritual so often that she was able to poke fun at it. When she joined Mr. Biden and other world leaders for an official photograph in which each was positioned socially distant from the others, she asked cheekily, “Are you supposed to look as if you’re enjoying yourself?”

She seemed to be. And so did the presidents who met her.