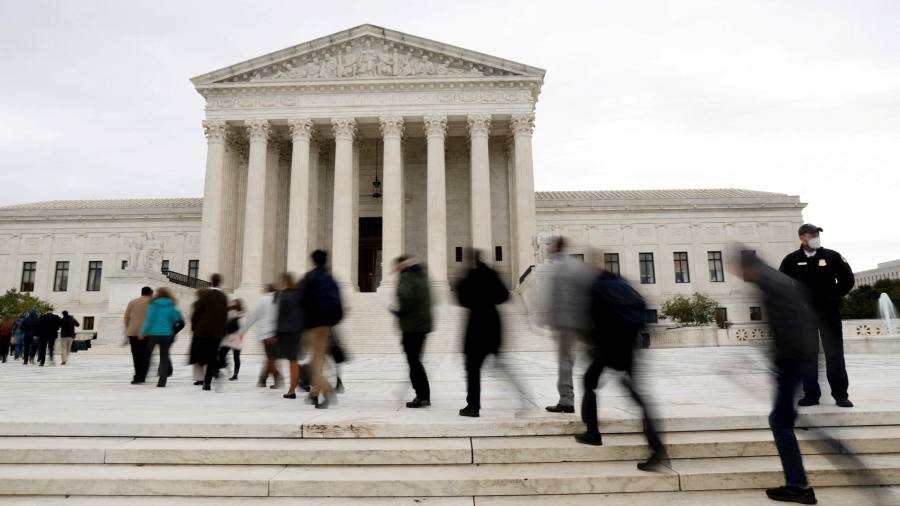 After a blockbuster term that reverberated through American society, the Supreme Court’s new session could have far-reaching effects on US business as it confronts a bench that has not shied away from rewriting decades-long legal precedents.

Over the coming months the court will hear cases on issues from affirmative action to the reach of state regulation and the question of where companies can be sued.

Last term’s decisions on polarising issues including abortion and school prayer were split down ideological lines, revealing a clear delineation on cultural, social and religious themes. But when it comes to corporate cases, the justices’ willingness to reject settled precedents suggests “it’s much harder to predict” what they will do, said Eric Talley, professor at Columbia Law School.

The decision to reverse Roe vs Wade, the 1973 ruling that enshrined the constitutional right to an abortion, suggests “this court simply is not as inclined as prior courts to treat precedent as a particularly large constraint if they don’t agree with the outcome in the case . . .[It] throws things in a little bit of disarray”, Talley added.

Despite a solid 6-3 conservative majority, there is no guarantee that the justices will prove friendly to business interests, legal experts say. Gregory Garre, a former solicitor-general in the administration of George W Bush, said it was “wrong to characterise this as a reflexively pro-business court”.

The court’s right-leaning wing has also been tilting “towards a type of cultural or political conservativeness as opposed to a libertarian and federalist bench” that existed about 25 years ago, said Talley. It “is a lot more issue-oriented than it is a commitment to decentralisation overall”.

Here are some of the cases US businesses will be watching most closely.

For its second big case in as many terms involving the main US environmental regulator, the Environmental Protection Agency, the court is wading into the question of what constitutes “navigable waters” under the Clean Water Act, a law regulating the release of pollutants and the quality of water.

The EPA defines “navigable waters” to include lakes, swamps, mudflats, wetlands, sloughs, prairie potholes and streams. Plaintiffs who brought the case — a couple barred from building a home near a mountain lake in Idaho — say it has been poorly articulated, leaving lower courts to decide what qualifies.

The court has been asked to resolve “an issue that has confounded the Supreme Court and the agencies for decades”, said Garre, now a partner at Latham & Watkins. “It has implications not just for the environment but for businesses that have to make land-use decisions.”

Curbing the EPA’s jurisdiction over certain areas “could lead to a significant restriction of federal power”, said Thomas Saunders, partner at WilmerHale. As a result, “some states will make sure they have regulations in place to fill the gap”, he added.

Where a company gets sued may seem like a technicality, but to businesses it is of vital importance. Currently, plaintiffs mostly bring cases in states where companies are headquartered or incorporated. In the case before the court, however, a Virginia resident who worked in Ohio and Virginia for Norfolk Southern Railway — then headquartered in Virginia — sued it for “negligent and reckless conduct” in Pennsylvania, where the company also has a business license.

If the court rules against Norfolk Southern, plaintiffs could challenge businesses in any state where they have licences, irrespective of where the claim unfolds. States would still need to enact laws implementing a court decision. If they did, it could trigger a seismic shift, with litigants “forum shopping” for hospitable courts, legal experts say.

“There will be a handful of states that will become very plaintiff-friendly and encouraging more lawsuits to be brought in those states,” said a lawyer involved in the case. “That’s not going to be good news for the business community.”

Even the administration of Joe Biden has filed a brief in support of Norfolk Southern, arguing a court should not be involved in a case where the corporate defendant only has a business licence in that state.

“I think on some of these issues the court is a little less predictable, but this one you could easily see being 9-0 or close to 9-0” for the railway, said Kannon Shanmugam, a partner at Paul Weiss.

Oral arguments are set for November 8.

California is known for having some of the toughest regulations among US states on issues from pollution and consumer safety to animal welfare. How far these standards should reach beyond its borders sits at the heart of a case brought by farmers over California’s rules for animal housing.

Pork producers are challenging Californian regulation that bans the sale of meat and eggs derived from farm animals “confined in a cruel manner”, according to the state’s department of food and agriculture.

The producers argue that “hardly any” of them meet California’s strict requirements, and that the rule is “impermissibly extraterritorial”. Even though California accounts for 13 per cent of America’s pork consumption, few large-scale pig farms are located there, according to their brief.

California’s restrictions have “really significant effects outside California because no one wants to forgo the nation’s largest market”, said Shanmugam.

The case addresses the boundaries of state regulation at a time when US legislatures have grown increasingly polarised on a number of issues, from abortion to gun rights and immigration. These proceedings “could affect any number of business issues or social policy issues that states care about”, said Nicole Saharsky, partner at Mayer Brown.

One of the most legally contentious questions related to social media platforms is whether they should be responsible for material recommended to their users that is posted by third parties.

The plaintiffs — the relatives of a 23-year-old American student killed by Isis in 2015 — sued Google for having allegedly “aided and abetted” the terrorist organisation through radicalising videos on its YouTube platform.

They argue Section 230 of the Communications Decency Act, which protects online platforms from legal liability over content posted by their users, was enacted before the rise of algorithms and no longer captures how material is shared and consumed on the internet.

Google argues there is no link between their recommended videos and alleged violations of the Anti-Terrorism Act.

The case’s outcome could have ramifications beyond Big Tech. “Other companies will be following this closely, even though the court could limit its decision to conventional social media companies,” said Garre.

The court has not set a date for oral arguments.

Two of the most eagerly anticipated cases on the docket address affirmative action based on race in university admissions, touching on a long-running and polarising debate in the US.

Plaintiffs said admission systems that take into account an applicant’s race — which both universities argued helps to unlock diversity’s “educational benefits” — actually discriminate against some groups, including people of Asian descent.

“Everyone is operating on the assumption” that the court will limit affirmative action at universities, according to one lawyer involved in the case.

Dozens of America’s largest corporations, including Apple, Google and Meta, have filed briefs supporting affirmative action, worried that ending those policies could narrow the pool of diverse graduates they can recruit from.

Companies may think “they’re going to be next” and that the court could “claw back” rights to decide who they can hire, Talley at Columbia Law School said.

Oral arguments for both cases are scheduled for October 31.

These cases hit at the core of the debate on the power of US federal regulatory agencies.

Both the FTC and the SEC have been sued by plaintiffs who argue the agencies’ internal enforcement procedures and administrative law judges — who are appointed by the regulators and decide disputes at the agencies’ in-house courts — are unconstitutional.

The agencies argue that the plaintiffs seek to “short-circuit” review processes embedded in statutes that underpin the FTC and SEC.

A loss for the regulators would make it easier for parties to challenge enforcement actions in federal court before agencies’ internal proceedings are finished, upending a standard practice.

It would also raise fresh questions about agencies’ authority, and could “really open up a whole new way to challenge what administrative agencies are doing”, Saharsky at Mayer Brown said.

If the justices curb the agencies’ power, “there’s no question that a lot of the current leadership . . . will have to either scale back their plans” or conform to rules recognised by the court, said Thomas Dupree, a partner at Gibson Dunn.

Oral arguments for both cases are set for November 7.

Amid a rising tide of unionisation, the court will consider whether US laws shield unions from claims of destroying an employer’s property amid a labour dispute.

The case concerns a 2017 strike by cement truck drivers in the state of Washington, where Glacier Northwest disciplined some of the employees involved because the loads they were transporting had turned into concrete while idle.

The company argues unions may be “emboldened” to use property damage as a negotiating tactic. But the Teamsters pointed to a lower-court ruling that forbade companies from suing “simply because the strike caused economic loss, as strikes inevitably do”.

“Businesses obviously have a strong interest in what happens in labour relations but if the case is limited to destruction of property it may not have a big impact as most businesses would hope that their labour disputes would not get to that point,” said Saunders at WilmerHale.

A broad ruling against the Teamsters could be significant for unions, affecting their right to strike, their bargaining power during labour disputes and how labour laws are implemented in the country.

The court has not set a date for oral arguments.

Insiders who purchased US$162k worth of Compass, Inc. (NYSE:COMP) shares over the past year recouped some of their losses after price gained 14% last … END_OF_DOCUMENT_TOKEN_TO_BE_REPLACED