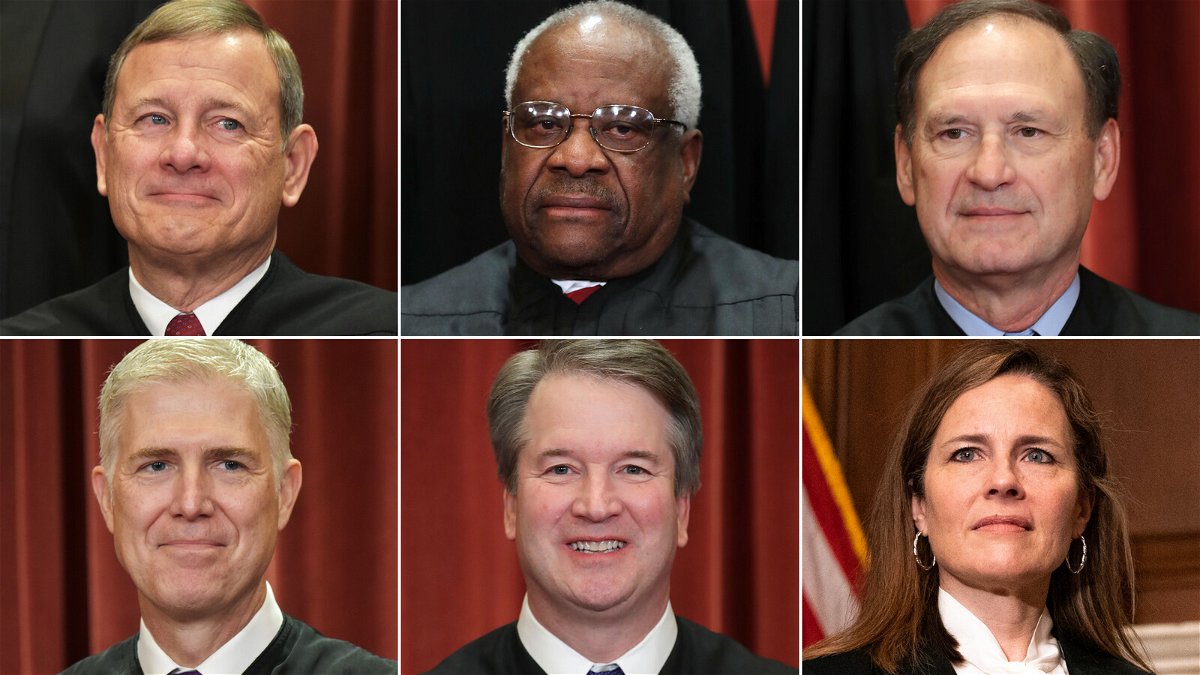 Over the last year, the Supreme Court’s newly solidified conservative majority has made clear that it is willing to forgo a deliberate pace of justice in favor of a race to the right, leaving behind the liberal justices and at times Republican-appointed Chief Justice John Roberts.

The conservatives on the bench, including all three of former President Donald Trump’s nominees, cast votes to take up a direct challenge to Roe v. Wade and hear a Second Amendment case that could expand gun rights. They have moved to bolster religious freedom protections and could soon take on affirmative action as well as election-related disputes. Perhaps most notably, the court allowed a Texas six-week abortion ban to remain on the books, even though it directly contradicts the court’s nearly 50-year-old precedent.

The last 12 months have confirmed not only where the court is heading, but how fast it might get there.

Staring at the prospect of decades in dissent in the cases that most capture the public’s attention, some progressives want to expand the number of justices on the court to dilute the conservative majority. But a commission set up by President Joe Biden to explore court reform made no formal recommendations, only saying that there is “profound disagreement” on whether to expand the court. That means if Justice Stephen Breyer, 83, announces his retirement by July, as is widely expected, his replacement will be younger and maybe more liberal, but she could be in the minority on the most socially divisive issues for much of her tenure.

Biden’s first nomination is likely to come less than two years after Trump placed his final appointee, Justice Amy Coney Barrett, on the high court. After the September 2020 death of Justice Ruth Bader Ginsburg, Republicans moved at an accelerated pace to get Barrett confirmed before the election.

Barrett made her presence known immediately. When Ginsburg was still alive, for example, the court turned away emergency challenges from houses of worship to state covid restrictions. But Barrett’s vote changed the course of those disputes, shifting the majority in favor of the houses of worship.

At about the time of Barrett’s confirmation, the Supreme Court also began considering whether to take up a Mississippi abortion law that bans the procedure after 15 weeks of pregnancy. Behind closed doors, the justices mulled whether to accept the case for months, before granting cert in May. Soon after, Mississippi raised the stakes in its opening brief by asking the court not only to uphold its law, but overturn Roe.

The case catapulted the justices back into the middle of an issue that has dominated judicial confirmation hearings as well as public discourse for the last several decades.

At oral arguments in December, Roberts floated a middle ground position that might stop the majority from overturning a landmark decision so early in the new court’s tenure. At the time, Roberts’ approach didn’t seem to attract the interest of any of his conservative colleagues, but that could change as they grapple with the case behind closed doors.

Meanwhile, another abortion case popped up this fall that managed to overshadow the Mississippi dispute for a time. At issue was a Texas law barring abortions after six weeks that was written in a novel way to keep the dispute out of federal courts.

The Texas legislature specified that the law could not be enforced by Texas. Instead, individuals, from anywhere in the country could bring suit in state court against anyone they believed had helped a woman get an abortion. Critics noted that the so-called “bounty hunters” could potentially collect more than $10,000 in damages. Doctors in the state –terrified by the prospect of fines — stopped performing abortions covered by the law, bringing the exercise of a constitutional right to a near halt in the state.

The Supreme Court allowed the law to go into effect on September 1 over the dissent of Roberts and the three liberals, and later agreed to an expedited hearing in November.

At oral arguments it appeared that Justices Brett Kavanaugh and Barrett had concerns with the way the law was structured. But when the decision came down on December 10, they sided with the majority to allow it to remain in effect. In the end, the court offered abortion providers a narrow path to challenge the law, but the so-called “bounty hunters” are still free to bring suit and clinics aren’t likely to start up again in the near future.

Roberts, joined by the liberal flank, pointed out that the decision would inspire copycat laws.

“The nature of the federal right infringed does not matter,” he said, “it is the role of the Supreme Court in our constitutional system that is at stake.”

The case also showcased the fact that the conservatives no longer are dependent on Roberts to move the court to the right.

It’s something Roberts has joked about before.

“I did learn early on that when you are holding the reins of leadership you should be careful not to tug on them too much — you will find out they aren’t connected to anything,” he told an audience at New England Law in 2016. This is now his reality.

The court’s shift right was not only evident in the area of abortion.

At the end of last term, in July, a 6-3 court limited the ability for minorities to challenge state laws they believe are discriminatory under the historic Voting Rights Act.

In another 6-3 decision, the court also invalidated a California regulation that required charities to disclose their donors, a decision that could lead to the invalidation of other donor disclosure laws in the political realm that would allow more anonymous money into the political system.

A 6-3 court also weakened the power of unions in a property rights dispute out of California.

Yet at times the court’s pace hasn’t satisfied the court’s right flank. In Fulton v. Philadelphia, decided in June, the court ruled in favor of a Catholic Foster Care agency that refused to work with same-sex couples. The court’s majority said that Philadelphia had violated the First Amendment when it froze the contract of the agency because it believed that marriage should be between a man and a woman.

But Justices Samuel Alito, Clarence Thomas and Neil Gorsuch, while agreeing with the result of the opinion, were still disappointed. They wanted the court to overrule decades-old precedent — called Employment Division v. Smith — that would make it much more difficult for the government to enforce laws that burden some individual’s religious beliefs. Notably, neither Barrett nor Kavanaugh were ready to go that far. That triggered Alito to criticize the court’s slow pace.

“Those who count on this Court to stand up for the First Amendment have every right to be disappointed — as am I,” he wrote.

No rest for the nine

At the conclusion of most terms, the justices leave Washington to enjoy quiet summer months before starting a new term in October. That didn’t happen this year. Instead, the justices’ summer was punctured by emergency applications.

Over the dissent of the three liberals, the court declined to put on hold a lower court order that required the revival of one of Trump’s immigration policies. It also blocked Biden’s eviction moratorium that was put in place amidst the pandemic. And Barrett declined a request to block Indiana University’s vaccine mandate.

By the time the new term started in October, the justices were already fully engaged and the court instituted a new oral argument scheme that significantly changed how cases are heard. Instead of the rapid fire sessions of past years where the justices often interrupted each other, a new format allowed the justices an untimed round of questioning after the advocate’s time officially expired.

The new format pleases Justice Clarence Thomas, who, after years of near total silence during oral arguments, now launches each session with a question.

According to an analysis by Goodwin Law, arguments also take up much more time, running 42% longer than the time the court initially allocated.

That was evident on November 3, when the justices suggested they are poised to strike down a New York handgun law. It’s been a decade since the court decided a major Second Amendment case, and now it will occur in the first full term of all three of Trump’s nominees.

They also took on a religious liberty case in December where the majority expressed skepticism at arguments about a Maine tuition assistance program that allows parents to use vouchers to send their children to attend private schools but excludes religious schools from the program.

As the term continues, polls show the court’s approval rating has reached a new low. In the fall, several of the justices took the unusual step of appearing publicly, sometimes stepping up to defend the institution.

“My goal today is to convince you that this court is not comprised of a bunch of partisan hacks,” the conservative Barrett said at an event in September hosted by the University of Louisville’s McConnell Center, according to the Louisville Courier Journal.

Breyer expressed skepticism of plans to add members to the court in interviews with CNN’s Joan Biskupic. Alito defended how the court deals with cases that come up on its emergency docket in a speech at Notre Dame Law School, also in September

But of all the appearances, a talk by Justice Sonia Sotomayor resonated with liberals.

“There is going to be a lot of disappointment in the law, a huge amount,” she said at an event hosted by the American Bar Association. “Look at me, look at my dissents.”

Even as the red-hot US real estate market shows signs of cooling, young house hunters are increasingly turning to their parents to help them buy homes … END_OF_DOCUMENT_TOKEN_TO_BE_REPLACED

BI App Zing Data Gets Seed Investment July 1 2022 In the US, business intelligence (BI) and visualization app Zing Data has raised $2.4m in a … END_OF_DOCUMENT_TOKEN_TO_BE_REPLACED