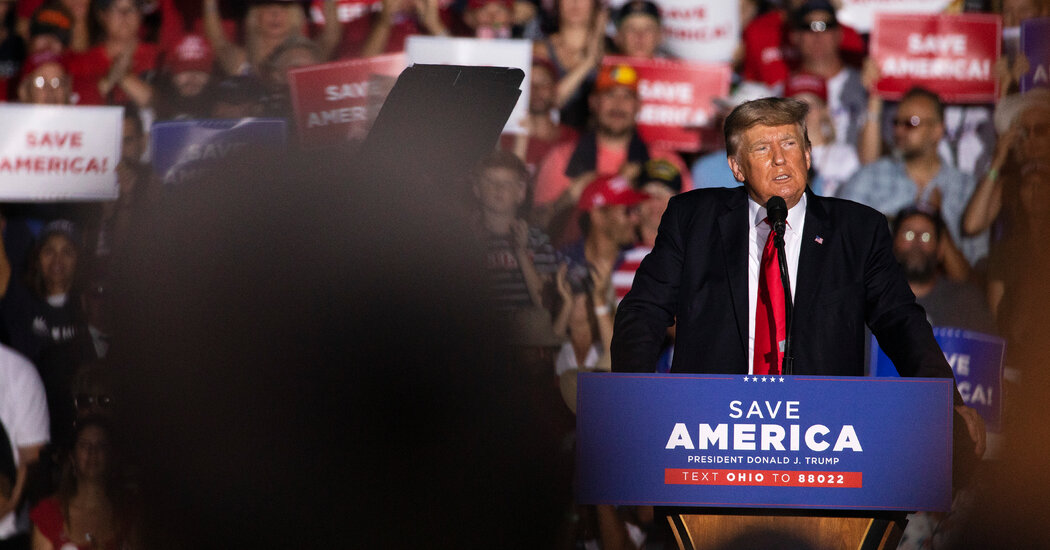 Former President Donald J. Trump is set to hold a Fourth of July-themed rally on Saturday night in Sarasota, Fla., across the state from where a tragedy has been unfolding for more than a week as firefighters, search dogs and emergency crews search for survivors in the collapse of a residential building just north of Miami Beach.

The planned political rally in the midst of a disaster that has horrified the nation has become a topic of discussion among aides to the former president and Gov. Ron DeSantis of Florida, a Trump ally whose growing popularity with the former president’s supporters is becoming an increasing source of tension for both men, according to people familiar with their thinking.

After officials from the governor’s office surveyed the scene of the condominium collapse in Surfside, Fla., Adrian Lukis, chief of staff to the governor, called Michael Glassner, a longtime Trump aide who is overseeing the Florida event, according to people familiar with the discussion. In a brief conversation, Mr. Lukis inquired whether the former president planned to continue with the event given the scale of the tragedy, two people said.

He was told there were no plans to reschedule.

A spokeswoman for Mr. Trump, Liz Harrington, said that the rally in Sarasota was “three-and-a-half hours away, approximately the same distance from Boston to New York, and will not impact any of the recovery efforts.”

She added that the former president “has instructed his team to collect relief aid for Surfside families both online and on-site at the Sarasota rally” and said that he planned to address the tragedy in his remarks.

Mr. DeSantis, who met on Thursday with President Biden when the president visited the site of the disaster, originally wanted to attend the rally but no longer plans to do so, aides said. “He spoke with President Trump, who agreed that it was the right decision, because the governor’s duty is to be in Surfside,” his press secretary, Christina Pushaw, said, adding, “Governor DeSantis would have gone to the rally in normal circumstances.’’

The governor, an early supporter of Mr. Trump, has been eager to play down any perceived tension with the former president, who endorsed his campaign for governor in 2018 and could cause him a political headache if he turned against him.

“Governor DeSantis is focusing on his duties as governor and the tragedy in Surfside, and has never suggested or requested that events planned in different parts of Florida — from the Stanley Cup finals to President Trump’s rally — should be canceled,” Ms. Pushaw said after the Washington Examiner reported that Mr. DeSantis had pointedly asked Mr. Trump to delay his rally.

The recent conversation between Mr. Lukis and Mr. Glassner was not the first time Mr. DeSantis’s staff had expressed reservations about the timing of Mr. Trump’s event. Before the condominium collapse, Mr. DeSantis’s office had suggested to the Trump team that the fall was better timing for a rally, given the perils of hurricane season in Florida, two people familiar with the conversation said.

Mr. Trump ignored the suggestion. Shut out of Facebook and Twitter, Mr. Trump has been eager for an outlet to have his voice heard and has been chomping at the bit to return to the rally stage, aides said.

Mr. DeSantis is seen as a top-tier Republican presidential candidate for 2024, and may end up in a political collision with the former president, who himself has hinted that he is considering a third try for the White House.

People close to Mr. Trump said he had become mildly suspicious of a supposed ally. He has grilled multiple advisers and friends, asking “what’s Ron doing,” after hearing rumors at Mar-a-Lago that Mr. DeSantis had been courting donors for a potential presidential run of his own. He has asked aides their opinion of a Western Conservative Summit presidential straw poll for 2024 Republican presidential candidates, an unscientific online poll that showed Mr. DeSantis beating Mr. Trump.

And in a comment intended to prove his dominance over both Mr. DeSantis and former Vice President Mike Pence, he has floated Mr. DeSantis as a potential No. 2 on his ticket should he run again.

Insiders who purchased US$162k worth of Compass, Inc. (NYSE:COMP) shares over the past year recouped some of their losses after price gained 14% last … END_OF_DOCUMENT_TOKEN_TO_BE_REPLACED