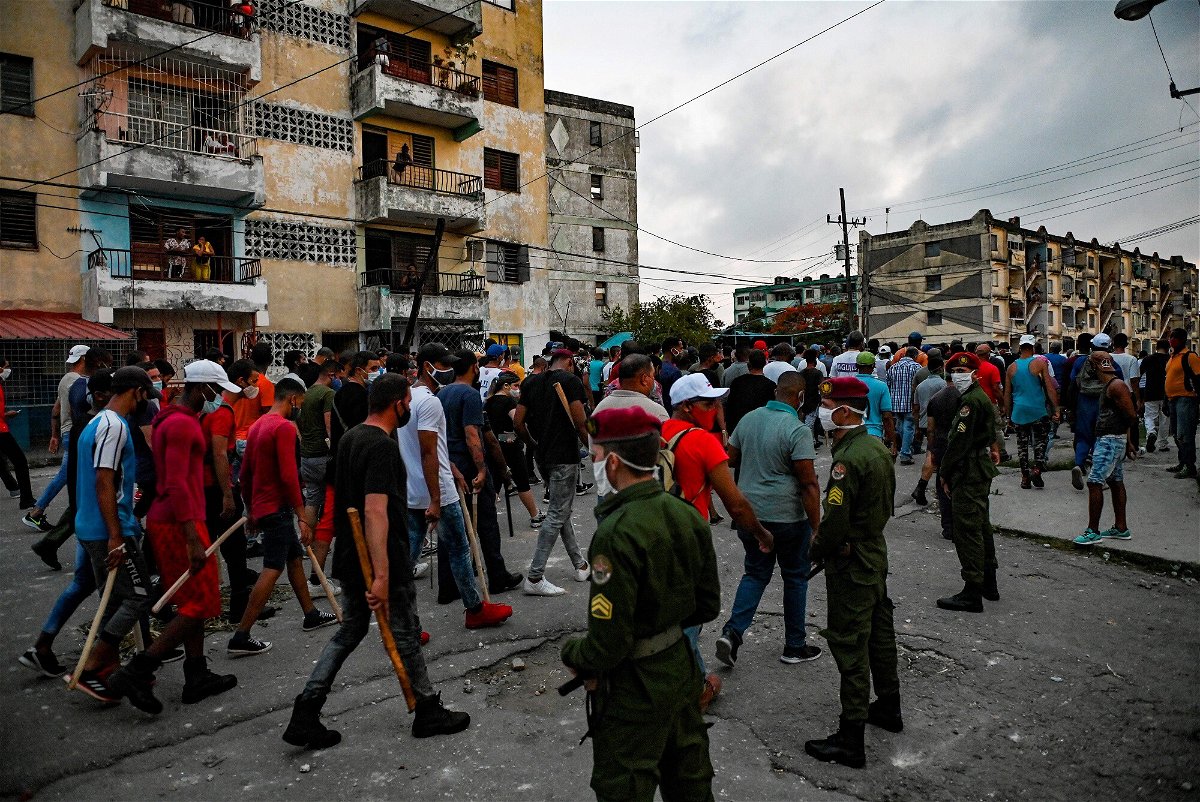 Democrats in South Florida, beleaguered by a tough 2020 election in the state, have been privately and publicly urging their party leaders to embrace the protests against Cuba’s communist regime that are roiling the island nation.

Their reasoning is as much personal — these Democrats believe supporting the protests is the right thing to do — as it is political — standing with the Cuban people could help the party regain ground with the state’s diverse Hispanic voters, nearly half of whom voted for then-President Donald Trump in 2020 in a nearly 10-point swing from four years before.

Annette Taddeo, a Democratic state senator from Miami-Dade County, has called on President Joe Biden to visit Miami to show solidarity with the rare demonstrations in Cuba, which have brought thousands into the streets calling for freedom, better economic conditions, internet access and an end to the dictatorship.

An appearance by the Democratic President, Taddeo told CNN, would go a long way with Cuban American and other Latino voters in South Florida.

“The politics come with being there,” she said.

Florida has long been one of the most prized states in politics, gaining outsized influence because of its size, diversity and the way it swung between Democrats and Republicans for years. In recent years, however, the state has tilted right, backing Trump in 2016 and 2020.

Taddeo, a Colombian immigrant, says she has been in touch with officials in the White House and has held public events on the Cuban protests with other prominent South Florida Democrats, such as Miami-Dade Mayor Daniella Levine Cava and Rep. Debbie Wasserman-Schultz.

Despite hopes and even expectations that Biden would replicate former President Barack Obama’s foreign policy on Cuba — normalizing and expanding diplomatic relations, relaxing decades-old travel and trade restrictions — he has yet to fulfil his campaign promises to roll back the Trump administration’s Cuba sanctions or open up relations again. Indeed, six months into Biden’s presidency, the White House has yet to complete its review on Cuba policy.

In large part, that’s because of Florida politics and a growing concern among Democrats that the inroads Republican made in South Florida in the 2020 election will become an even bigger issue in the coming years — particularly as the state is set to gain another seat in the House of Representatives after the 2020 census.

Asked how much Florida politics are shaping the Biden administration’s Cuba policy, administration officials sidestepped the question but stressed their interest in the welfare and freedoms of the Cuban people as well as in increasing US Embassy staffing on the island to better engage with Cuban civil society amid the unprecedented protests

It’s unclear where the administration’s official policy on Cuba will land. But Democrats in Washington are getting the message from South Florida and are emphasizing how tough the administration has been in response to the protests. The Democratic National Committee launched targeted English- and Spanish-language digital ads this week in the Sunshine State that highlight Biden’s recent punitive actions against the Cuban government.

“We have a huge opportunity here with a President who is more forceful on Cuba where many Democratic presidents in recent memory may not have been as forceful,” a senior Democrat said of Biden’s response to the Cuban crackdowns. “There is some real opportunity here. We have something very concrete that, across the ideologic spectrum — save maybe the farthest of the far left — is supported.”

The Democrat added that many in the party’s leadership believe Trump’s dominance in South Florida was “more of an aberration than some sort of liner trajectory for how Democrats can perform in South Florida.”

This push from South Florida Democrats like Taddeo reflects how the party is looking for ways to break the GOP’s hold on the closely split state. In 2020, Republicans made significant inroads with an array of Latino voters in South Florida, including Cubans, Colombians and Venezuelans.

The increase was so significant that Trump was able to become the first Republican presidential candidate since 1976 to lose Duval County in North Florida — a longtime Republican bastion — and still win the state by more than 3 percentage points.

During the campaign, Republicans portrayed Democrats as soft on communist regimes, emphasizing how Trump had reversed much of the “thaw” in US-Cuba relations during Obama’s second term.

The GOP messaging worked, particularly after Biden said two months before the election that he would roll back Trump’s sanctions on Cuba. Dario Moreno, a political science professor at Florida International University, said foreign policy on Cuba has outsized resonance with Florida Latinos, even among the growing non-Cuban Hispanic communities.

“Florida has a very heterogenous Latino population but one of the things that hold them in common … is a lot of them are fleeing left-wing governments,” Moreno said. “Trump cultivated that concern [about Cuba] in South Florida, not only with Cubans but with Colombians and Venezuelans and Nicaraguans.”

Even with the direct Biden response, Florida Democrats have a growing sense of dread that the dent Republicans have made in South Florida could become an even bigger issue in the coming years.

“It works,” Evelyn Pérez-Verdía, a veteran Florida Democratic strategist and Colombian American, said about the Republican strategy. “Sadly enough, we have seen this work in the past with what Trump did with Latino communities. … From the Democrats that I have talked to, there is a serious concern.”

Pérez-Verdía said Floridians from the Latino diaspora “look at everything through the lens of the politics of their country,” meaning “Florida politics is international politics” as much as it is domestic.

Democrats are attempting to respond with plans to address US policy toward the island nation, as well as with forceful statements about the democracy movements there. Earlier this month, the Biden administration sanctioned a key Cuban official and a Cuban special forces unit known as the Boinas Negras for human rights abuses in the wake of protests.

Biden said sanctions were “just the beginning,” pledging that “the United States will continue to sanction individuals responsible for oppression of the Cuban people.” The President went on to “condemn the mass detentions and sham trials that are unjustly sentencing to prison those who dared to speak out in an effort to intimidate and threaten the Cuban people into silence.”

The DNC’s geo-targeted Facebook ads in both English and Spanish highlighted Biden’s stance on Cuba and his pledge for more sanctions. Multiple iterations of the ad highlighted Biden saying that communism is a “failed system.”

“The DNC is committed to using our resources to speak directly to the Cuban community in South Florida to make sure they know that President Biden and Democrats have their back,” said Jaime Harrison, chair of the Democratic committee.

Asked directly if domestic politics surrounding Florida were playing a role in US foreign policy on Cuba, a senior State Department official said, “Our focus right now is on the people on the island, making demands of their government for change.”

“We are very interested in the voice of the Cuban people being able to be heard and have expressed concerns about efforts to curtail internet freedom and in communication,” the official said.

“It is clear that the protests were a result of the Cuban people’s exhaustion with the inability of their government to meet their demands and were spontaneous and honest calls for change,” the official said. “That really is the key focus of our efforts right now — determining the best way to support the Cuban people and to hold the government accountable for its actions.”

Cuba watchers like John Kavulich, president of the US-Cuba Trade and Economic Council, say domestic politics will always play a role in Cuba — particularly with Florida set to gain another electoral seat after the latest census.

“US politicians focus on politics, so why is anyone shocked when any politician — whether it’s President Biden, President Trump, President Obama, the first President Bush — sees it that way? A politician is going to take into account what the constituents want. Cuba is a domestic political issue,” Kavulich said.

“When people say that the Biden admin should be strong and remove Florida from the Cuba policy decision-making process, it’s foolishness. It’s not going to happen. The fact that Florida is picking up a seat in the House of Representatives makes it even more important for both political parties,” Kavulich added.

The Wood River Valley real estate market continues to show signs of strength, despite rising interest rates and efforts by the Federal Reserve to slow … END_OF_DOCUMENT_TOKEN_TO_BE_REPLACED