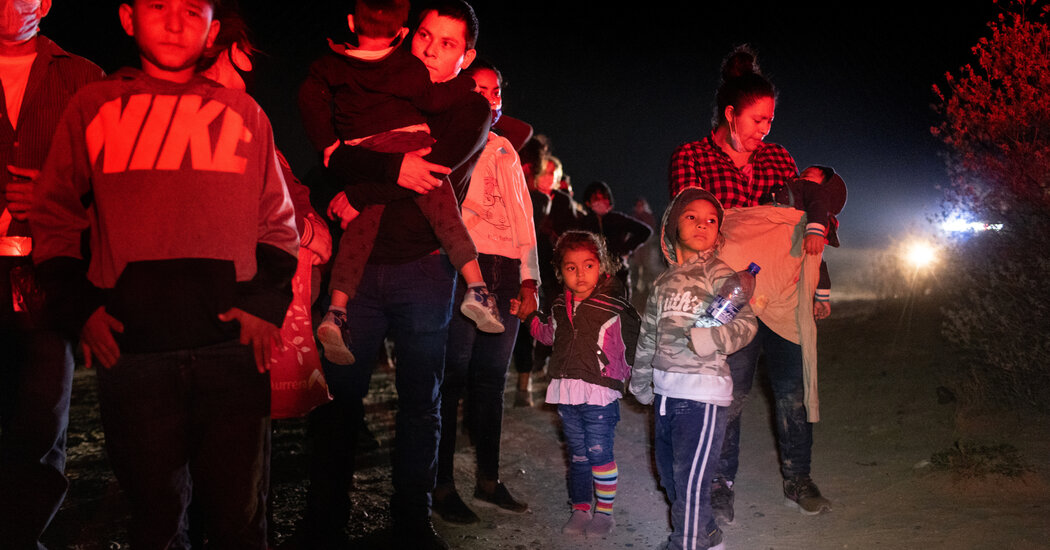 WASHINGTON — The Biden administration is starting to see some success in its efforts to shelter thousands of children and teenagers at the southwestern border, with a fraction of the number of children still held in the jails run by the Border Patrol than there were a month ago.

And the length of time children are staying in border cells has decreased as well, to an average of 28 hours in recent days from 133 hours a month ago. Federal law mandates that migrant children be transferred out of Border Patrol custody within 72 hours. Mr. Mayorkas said that as of Friday, there were as few as four children held there for more than that time.

“The progress that has been made is dramatic,” Mr. Mayorkas said. He credits much of the success to the emergency shelters the Federal Emergency Management Agency set up in vacant facilities throughout the United States, including in convention centers in Dallas and San Diego, an expo center in San Antonio, and a military site and a former camp for oil workers in Texas.

Mr. Mayorkas said additional department employees, including asylum officers, had been deployed to help the Department of Health and Human Services connect the children to family members in the country.

The task of moving migrant children from the detention facilities, which were designed for adults, to the more suitable shelters managed by the Department of Health and Human Services has emerged as one of the early challenges of President Biden’s term. Because of a shortage of shelters, the Biden administration had not been able to move the children within the three-day time frame until recently.

The improvements were welcomed by the administration, but officials were realistic about the challenges ahead.

“There has been some progress that has been made,” Jen Psaki, the White House press secretary, said on Friday, while acknowledging the situation was far from resolved.

“There’s more work to be done,” she said, adding that the administration was focused on discharging children from government custody to family members in the country or temporary foster homes, a process that takes a significant amount of time as well.

That effort has seen some modest improvement over the past month, with 413 children discharged from government custody on Thursday compared with 248 who were discharged a month earlier.

The situation at the border has complicated Mr. Biden’s ability to follow through on a campaign pledge to make America a more compassionate place for migrants, in contrast with the tough, restrictive policies of the Trump administration. The Biden administration has taken steps to unwind former President Donald J. Trump’s restrictive agenda, including on Friday when it announced that it had canceled border wall projects paid for with Defense Department funds. The move was widely expected after Mr. Biden suspended wall construction earlier this year.

But reports of migrant children forced to sleep on gym mats with foil sheets in overcrowded Border Patrol holding cells — often going days without bathing — did not present the America Mr. Biden promised. And Republicans have latched onto what they call the “crisis” at the border as their main talking point against the president.

Immigration groups have criticized the Biden administration for continuing to use a public health emergency rule put in place by the Trump administration that empowers agents to rapidly turn migrants back to Mexico without providing them the opportunity to ask for asylum. The groups have said the policy exposes asylum seekers to violence in Mexican areas like Juárez and Reynosa.

Avril Benoît, the executive director of Doctors Without Borders, said in an open letter to the administration that the policy “is driving a humanitarian crisis across the border and stands in stark contrast with your declared values and your objective of expanding pathways for protection in the U.S.”

Administration officials have said they are still determined to use the rule to turn away families crossing the border. Because of a new law in Mexico and a lack of space in shelters there for children, the United States can no longer send many families with a child under 7 back across the border. An increasing number of families have also approached entry ports at the border and received a humanitarian exemption from the rule.

In allowing migrant children who arrive at the border alone to enter the country, Mr. Biden has broken with part of the Trump administration policy. But officials have had to scramble to find appropriate shelter for the children, who have been arriving in record numbers. More than 18,700 unaccompanied children and teenagers were taken into custody in March after crossing the border, including at port entries, nearly double the roughly 9,450 minors detained in February. Mr. Mayorkas has said border officials are expected to make more apprehensions this year at the border than in the last two decades.

As of Thursday, more than 22,500 children were in the custody of the Health and Human Services Department, compared with the 11,886 a month ago. Efforts to unite them with family members in the country have been seeing more success, as well.

“At the end of the day, the process is a delicate balance of safety and speed,” Krish O’Mara Vignarajah, the chief executive of Lutheran Immigration and Refugee Service, said in an interview on Friday. These children, she said, deserve to be reunited with their families or released to a safe and loving home, a result that requires doing thorough, time-consuming background checks so that the children, already traumatized, are not subjected to more harm.

Most of the migrants arriving at the southwestern border are coming from Central America and are fleeing poverty, violence and natural disasters, including two back-to-back hurricanes that devastated parts of Honduras and Guatemala last fall.

Tech Tracker rounds up what’s happening in the technology sector of the restaurant industry, including news from restaurants, vendors, digital … END_OF_DOCUMENT_TOKEN_TO_BE_REPLACED