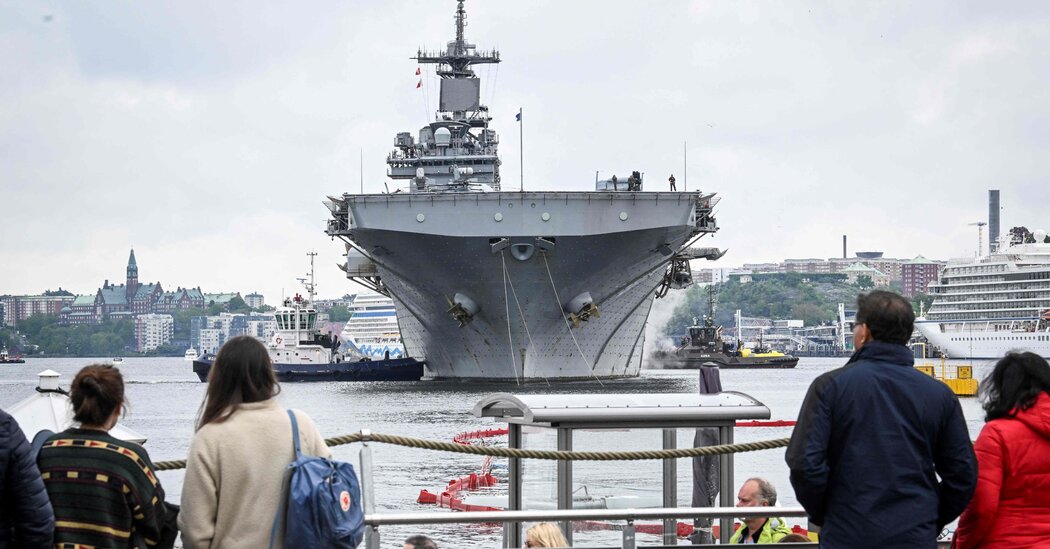 ABOARD U.S.S. KEARSARGE, in the port of Stockholm — If ever there was a potent symbol of how much Russia’s invasion of Ukraine has altered Europe, the sight of this enormous warship, bristling with 26 warplanes and 2,400 Marines and sailors, moored among the pleasure craft and tour boats that ply this port, would certainly be it.

“No one in Stockholm can miss that there is this big American ship here in our city,” said Micael Byden, the supreme commander of the Swedish Armed Forces, standing on the amphibious assault ship’s deck in the shadow of an MV-22 Osprey under a clear sky on Saturday. “There are more capabilities on this ship,” he marveled, “than I could gather in a garrison.”

In this perennially neutral country that is suddenly not so neutral, the U.S.S. Kearsarge, which showed up just two weeks after Sweden and Finland announced their intention to seek membership in NATO, is the promise of what that membership would bring: protection if President Vladimir V. Putin of Russia turns his ire toward his Nordic neighbors.

But the ship is also a warning to Sweden and Finland of their own potential obligations should a conflict arise, as Gen. Mark Milley, America’s most senior military commander, made clear during a visit Saturday.

“The Russians have their Baltic fleet,” General Milley, the chairman of the Joint Chiefs of Staff, said, but NATO would have its own slew of member countries wrapped around the Baltic Sea once Sweden and Finland join. In essence, the Baltic would become a NATO lake, save for St. Petersburg and Kalingrad.

“From a Russian perspective, that would be very problematic for them, militarily speaking,” General Milley said.

Prime Minister Magdalena Andersson of Sweden, appearing in a shipboard news conference beside General Milley, sought to emphasize the defensive nature of NATO.

But military experts say that there is a clear expectation that Sweden’s and Finland’s accession to the alliance means that they would contribute to any maritime chokeholds that NATO might put in place in the Baltic Sea in the event of a war with Russia, a potentially tall order for the historically nonaligned countries.

Both countries want security assurances, particularly from the United States and other NATO allies, during this interim period while negotiations with Turkey are holding up their formal membership to the military alliance. Sweden’s Defense Minister Peter Hultqvist told reporters in Washington two weeks ago that the Pentagon had pledged several interim security measures: U.S. Navy warships steaming in the Baltic Sea, Air Force bombers flying over Scandinavian skies, army forces training together and American specialists helping to thwart any possible Russian cyberattacks.

But while President Biden has pledged that the United States would help defend Sweden and Finland before they join the alliance, American officials have refused to say specifically what form that help would take, beyond what General Milley characterized Saturday as a “modest increase” in joint military exercises.

The refusal of any NATO country to send actual troops into Ukraine, Nordic officials acknowledged, lays bare the difference between promises of military help for friendly countries versus that under a Senate-ratified treaty that says an attack on one is an attack on all — NATO’s famous Article 5.

Still, the Kearsarge is in the Baltic Sea to take part in exercises meant to teach NATO, Swedish and Finnish troops how to carry out amphibious assaults — storming land that has been seized by, say, Russia. It is a hugely complex kind of war operation — think the D-Day landing during World War II — that requires coordination between air, land and naval units in what military planners call a “combined arms” mission.

If the exercises go according to plan, thousands of marines, sailors, pilots and other troops from 16 different countries will be seizing a beach head in the Stockholm archipelago.

Pentagon officials note that when thousands of Russian marines landed in southern Ukraine on the Sea of Azov coastline on Feb. 25 to target Mariupol, they did so some 43 miles to the east of the city, avoiding having to do an actual contested amphibious assault.

On the ground. As airstrikes intensified in the Donbas region of eastern Ukraine, the main focus of Russia’s onslaught, street fighting raged in the contested city of Sievierodonetsk. Jens Stoltenberg, NATO’s secretary general, warned that the conflict appeared to have become a “war of attrition” and advised allies to be prepared for “the long haul.”

Along with the rupturing of the notion that the Russian military is an efficient machine, the request by Sweden and Finland to join NATO is perhaps the biggest unintended consequence of Mr. Putin’s decision to invade Ukraine. Instead, Mr. Putin is now facing the prospect of a NATO military alliance that is not just on his doorstep but wrapped around part of the house.

The 2004 accession of Latvia and Estonia to NATO stretched its Baltic border with Russia for just over 300 miles; Finland’s joining the alliance would add another 830 miles, putting St. Petersburg almost within artillery range.

Sweden, meanwhile, shares a maritime border with Russia, as does Finland. Within a day of Finland’s leaders announcing their country should apply for NATO membership, the Kearsarge, named after a Civil War Union sloop famous for sinking Confederate ships, was heading to join Finnish and Swedish navies for training.

In fact, NATO has scheduled many shows of force with Sweden and Finland. “A whole host of exercises that didn’t exist on the exercise schedule are there now,” said Charly Salonius-Pasternak, a military expert with the Finnish Institute of International Affairs in Helsinki.

The emerging partnership is a two-way street. For NATO, beyond wrapping the alliance all around Russia’s western border, the entry of Sweden and Finland allows military planners to reconceptualize all of northern European defenses. In the past, the alliance had to make compromises about where to concentrate troops, headquarters and command and control to provide the best advantage.

All of this will undoubtedly draw the ire of Mr. Putin, who has long complained about the expansion of the military alliance into what he sees as his own sphere of influence.

“There’s going to be an almost continuous presence of non-Finnish military units in Finland,” Mr. Salonius-Pasternak said. “Are they the key to Finnish defense? No. But it probably adds to the calculus of our eastern neighbor.”

Even as the red-hot US real estate market shows signs of cooling, young house hunters are increasingly turning to their parents to help them buy homes … END_OF_DOCUMENT_TOKEN_TO_BE_REPLACED

BI App Zing Data Gets Seed Investment July 1 2022 In the US, business intelligence (BI) and visualization app Zing Data has raised $2.4m in a … END_OF_DOCUMENT_TOKEN_TO_BE_REPLACED