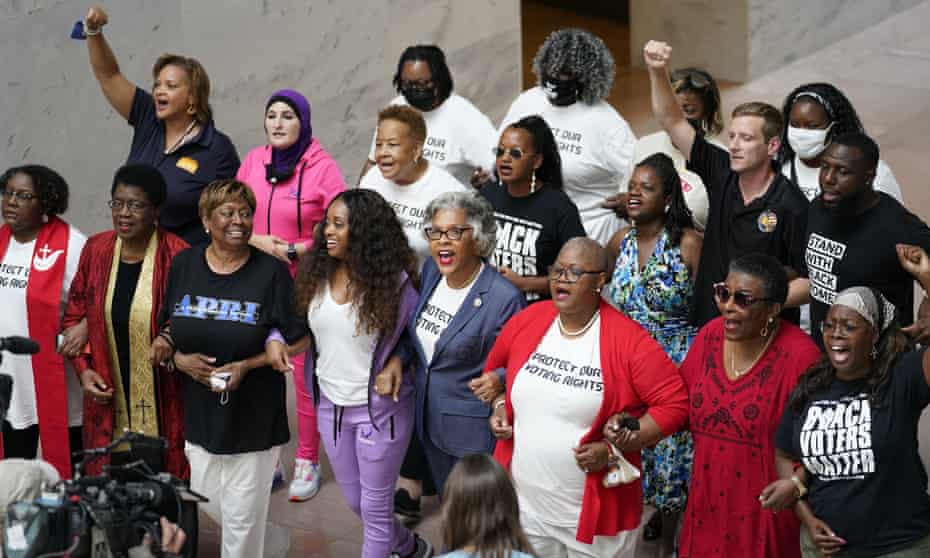 Few in the audience applauding Joe Biden could have questioned the sincerity of his warning about a momentous threat to American democracy.

But they may have walked away with lingering doubts about his ability to meet the moment or answer fears that even the office of the presidency will be found politically impotent in the face of the challenge.

“We’re facing the most significant test of our democracy since the civil war,” Biden said in a speech on Tuesday in Philadelphia, recalling the mid-19th-century conflict that left more than 600,000 people dead. “The Confederates back then never breached the Capitol as insurrectionists did on January the 6th.”

The president added pointedly: “I’m not saying this to alarm you; I’m saying this because you should be alarmed.”

Yet while Biden was praised by voting rights activists for correctly diagnosing the sickness, albeit somewhat belatedly, he was criticised for failing to offer a cure. He concluded his 24-minute speech with the exhortation “We’ve got to act!” but did not provide a battle plan.

At stake are the basic principles of democracy: who gets to vote, how they exercise that right and who gets to decide what vote counts. Since Biden’s victory over Donald Trump last November – a result that Trump and many Republicans refuse to accept, citing bogus claims of fraud – that right has been under a coordinated, relentless assault as never before in modern times.

This year 17 states have enacted 28 new laws to make it harder for people to vote. There have been nearly 400 voter suppression bills introduced in 48 states, according to the Brennan Center for Justice.

Some measures aim to reverse the vote-by-mail expansion that was put in place in the 2020 election due to the coronavirus pandemic. Others try to strengthen voter identification requirements, curtail hours and locations for early voting and ballot drop-offs or increase the risk that voters could be intimidated by poll watchers.

Campaigners say that people of color, young people and poor people would be the biggest losers. These groups are generally more likely to vote Democratic than Republican. Civil rights leaders met Biden at the White House earlier this month and appear to have convinced him that “the 21st-century Jim Crow assault is real”, as he put it on Tuesday.

The speech in Philadelphia, the birthplace of American democracy, was “a good first step”, according to Chris Scott, chief political officer of the group Democracy for America. “I think that’s what a lot of us, especially in the progressive movement, have been calling for,” he said.

“The part that really stuck with me was invoking Congressman John Lewis in saying, ‘Freedom is not a state; it is an act.” And so that’s why I say the speech is the first part but we are asking him to take action on this.”

Never once in his remarks did Biden mention Washington DC’s version of the F-word: filibuster. This arcane procedural rule in the Senate enables the minority to block debate on legislation. Last month Republicans used the filibuster to stall the For the People Act, which would create national standards for voting that could prevent some of the restrictions imposed by red states.

Former president Barack Obama has called the filibuster “a Jim Crow relic”, a reference to its long history of thwarting civil rights legislation. Biden, who served in the Senate for 36 years, could push for its abolition or reform from his bully pulpit and by privately making the case to sceptical Democratic senators such as Joe Manchin of West Virginia and Kyrsten Sinema of Arizona.

Scott continued: “We cannot get any meaningful reforms passed as long as we still have this filibuster in place and so one of the greater problems is seeing him be able to have the ability of some of his predecessors. I think of Lyndon B Johnson and how he was able to leverage his experience in the United States Senate to get his own party members to fall in line.

“When we have members like Joe Manchin, like Kyrsten Sinema, we have to have them actually fall in line because what we’re seeing is Mitch McConnell do what he does best. Whether or not he’s majority leader or minority leader, he always finds a way to handcuff whatever progress we actually want to get done.”

Fears were expressed during the Democratic primary campaign that Biden is a boxer, not a fighter, whose faith in an age of political chivalry and bipartisanship is ill-suited to the bloodsport of the Trump era. On Tuesday he urged the passage of both the For the People Act – “a national imperative” – and John Lewis Voting Rights Advancement Act but both appear doomed under current Senate rules.

In an interview with the Reuters news agency following the speech, the civil rights leader Al Sharpton pointed out that Biden did not mention the filibuster, adding that he had just spoken to the president. “And he said to me just now, ‘Al, we’re still working through where we are going to be on that.’ He’s not committed yet.”

Biden’s passivity on the issue was thrown into sharp relief by more than 50 Democratic legislators who abruptly flew out of Texas in an attempt to derail Republican efforts to pass voting restrictions in the state. The group came to Washington, gave impassioned speeches outside the US Capitol and met Kamala Harris, the vice-president who is leading White House efforts on voting rights.

Leah Greenberg, co-executive director of the progressive grassroots movement Indivisible, said: “It’s inspiring, it’s exactly what should be happening. Everybody in the country should be looking at what they are doing and asking themselves, how do I fight just as hard for the right to vote as these Texas Democrats are doing?

“One, they’re holding up the legislative process, but two they’re making a stand and actually bringing that fight to Washington and seeking help from the federal government and now it’s on all of us to rally to that cry.”

Greenberg also urged Democrats to be similarly aggressive regarding the filibuster. “Both Manchin and Sinema, while they’re clear that they will not abolish the filibuster, have in the past both entertained discussions around reforming it to try to return it to its real purpose, from the talking filibuster to things like having quorum limits go down over time.

Congresswoman Joyce Beatty, center, chair of the Congressional Black Caucus, and other activists lead a peaceful demonstration to advocate for voting rights in the Hart Senate Office Building in Washington on Thursday. Beatty and eight others were arrested. Photograph: J Scott Applewhite/AP

“These are the kinds of things that the Democratic caucus should be talking about, because the idea that we are going to fundamentally leave our democracy unprotected because of this legislative loophole from the late 1700s is just absurd.”

She added: “Fundamentally, President Biden could say that out loud. He hasn’t yet even called for reform so for him to say, ‘I’m doing everything I can’ when he literally hasn’t even made the call for legislative reform that would be necessary to pass the For the People Act just doesn’t pass the smell test.”

Some Democrats are seeking creative ways to break the stalemate. James Clyburn, the House majority whip, has suggested creating a carve-out to the filibuster for legislation applicable to election law or other constitutional changes, which would give Democrats a way to pass their voting rights bills with a simple majority, rather than 60 votes.

Clyburn, who arguably did more than anyone to secure Biden’s victory in the Democratic primary, told reporters on Wednesday: “I think President Biden should weigh in. All I want him to do is express support for it.”

Biden has also argued that legislation is not the only tool, noting that the justice department will challenge the onslaught of voting rights restrictions and focus on dismantling racially discriminatory laws. One such intervention is already under way in Georgia.

But the issue continues to threaten Democratic unity and shine a light on the limits of the presidency – or the man who currently holds that office. Adam Jentleson, executive director of the pressure group Battle Born Collective, said in a statement: “On voting rights, President Joe Biden is failing to meet the moment.

“There is a wide gap between his rhetoric and his leadership. In his speech, he described the conservative assault on our democracy as an existential threat, yet he refused to endorse the obvious solution, which is to pass voting rights legislation and reform the filibuster to do so, if necessary.”

The Wood River Valley real estate market continues to show signs of strength, despite rising interest rates and efforts by the Federal Reserve to slow … END_OF_DOCUMENT_TOKEN_TO_BE_REPLACED