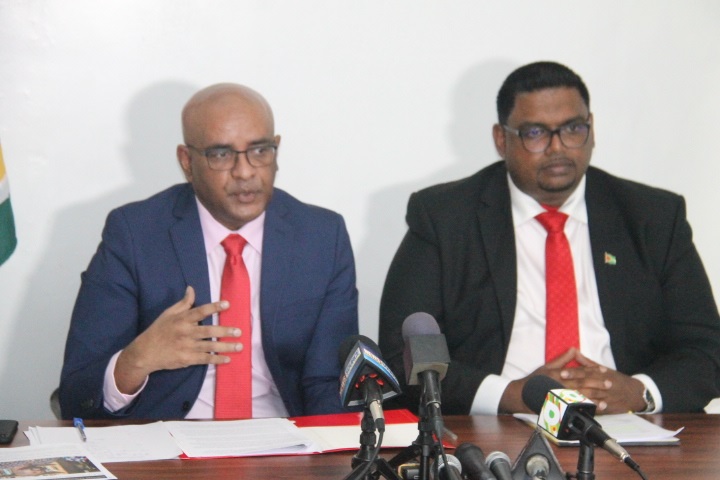 President Irfaan Ali and Vice President Bharrat Jagdeo left Guyana for the United States (US) to meet with American Secretary of State, Anthony Blinken and other top elected leaders and decision-makers, the Office of the President here said.

“At the invitation of the US Government, the delegation will meet with high-ranking US Government officials, including the Secretary of State and leaders of Congress and the Senate, to discuss a range of issues to further deepen bilateral relations between Guyana and the United States,” Dr Ali’s office said.

The visit comes against the backdrop of months of publicly ventilated concerns by a number of US Democratic Congressmen about alleged racial discrimination and the need for all Guyanese to benefit from the country’s wealth. The Guyana government continues to dismiss those concerns by, among others, Congressman Hakeem Jeffries. who represents parts of Brooklyn and Queens, New York.

Guyana is also the Caribbean Community’s (CARICOM) focal point on agriculture and food security coming out of the recently held US-organised Summit of the Americas. Guyana is also emerging as a major fossil fuel energy power house in CARICOM and Latin America.

Accompany Dr Ali and Mr Jagdeo  of the “series of high-level engagements” are Minister of Foreign Affairs and International Cooperation, Hugh Todd and Foreign Secretary, Robert Persaud, departed for Washington.

President Ali will also be a guest speaker at several events hosted by the Atlantic Council and will meet with US business leaders. He has also been invited to speak at the Woodrow Wilson Center for Strategic and International Studies and the Council of the Americas roundtable, among other events.

The President and his delegation are also expected to meet with Guyanese living in Washington DC.

Editorial IndependenceWe want to help you make more informed decisions. Some links on this page — clearly marked — may take you to a partner website … END_OF_DOCUMENT_TOKEN_TO_BE_REPLACED

Investors have remained skeptical as the main indices declined this year. The NASDAQ Composite tumbled close to 20 per cent in 2o22, and the S&P 500 … END_OF_DOCUMENT_TOKEN_TO_BE_REPLACED

A variety of cannabis companies shared their financial results this past trading week, offering investors a chance to inspect the health of the … END_OF_DOCUMENT_TOKEN_TO_BE_REPLACED