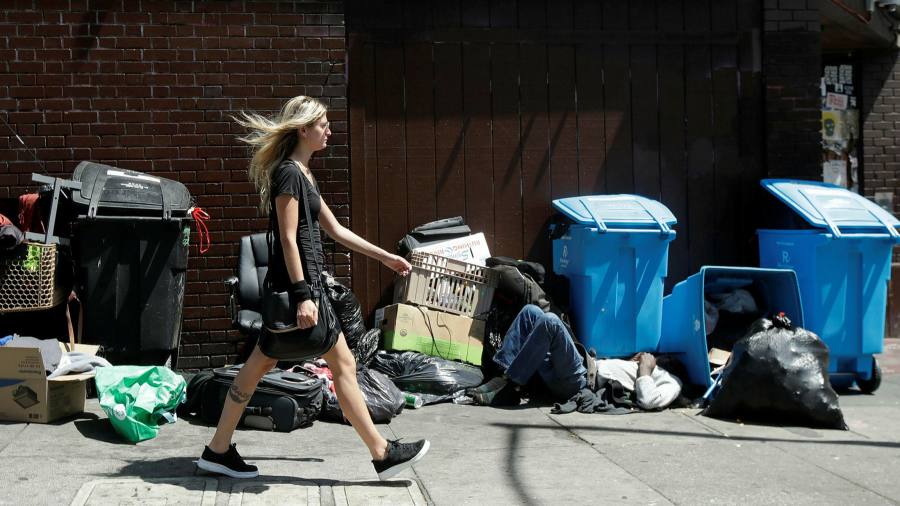 The bay views, the pastel homes, the human suffering: no city does less with more than San Francisco. How a place so spoilt for assets became a byword for rough-sleeping and urban dysfunction is, for Republicans, obvious. It is the fruit of liberal governance. What that diagnosis lacks in nuance it more than makes up for in national electoral resonance. Disorder in US cities is one theme the party hopes to ride to midterm glory next year.

Count the others, if you have the time. Inflation is up under a high-spending Democratic president. The border with Mexico slips in and out of crisis. The cultural left’s inroads into education trouble even liberal-minded parents of school-age children. Tot it all up and Congress should be the least of the prizes. Republicans dream of an ascendancy that lasts as long as it takes the Democrats to see that liberalism and “anything-goes” are different creeds.

Dreams, however, can cross into expectations. There are lots of reasons why Republicans should check their present exuberance.

One is the natural rhythm of politics. As President Joe Biden did this month, Barack Obama oversaw the loss of the Virginia governorship in 2009. He held the White House three years later. Almost all postwar presidents took losses in the House of Representatives at their first midterm test. (George W Bush, to whom voters rallied after 9/11 with what turned out to be tragic rashness, broke the trend). Several of them won re-election at a canter. In short, it would be far newsworthier if the Democrats were not bleeding votes right now. That Americans sour on the incumbent party almost as soon as they elect it is no guide to their choices later in the political cycle.

If life in opposition is a bell curve — the peak coming between elections — it might be even more pronounced this time. For millions of voters, material conditions are going to improve as 2024 nears.

As pandemic-era fiscal relief wanes, central banks tighten up and supply chains twitch back into life, inflation should recede. All the while, the benefits of Democratic largesse will start to be felt in new roads and, if Biden’s other big bill passes, fiscal transfers. In the US, each social-democratic reform is prone to a lifecycle: painful birth, public backlash, gradual acceptance. The last stage is deep suspicion of those politicians who would undo it.

The story of Obamacare is salutary. “We have to pass the bill,” said the Democrats’ Nancy Pelosi at the time, “so that you can find out what’s in it.” Lampooned to death, the remark turned out to be almost sinister in its prescience. Voters did not understand the opaque legislation until it became a settled and tangible part of their lives. At that point, Republicans threatened it at their own peril.

Once more, the party is underestimating how well a messily begotten reform can work for its authors over time. From the southern border to the urban crime wave to Kabul, the root of Biden’s unpopularity is a lack of executive grip. Republicans have persuaded themselves that it is “socialism”.

For all this, Congress is there for the taking. An aged Biden or maladroit Kamala Harris (now the vice-president) could gift the party the White House two years later. But that eternal trope — an “emerging majority” — does the rounds too blithely in conservative circles (and despairing liberal ones). This is still a party with one popular-vote win in a presidential election since 1988. It is still a party whose central figure, Donald Trump, logged even worse approval ratings than Biden, even earlier in his White House tenure. Some Republicans have let a spate of local gains disguise the frailty of their structural position.

They have also let this short-term success put off a reckoning with their own extremes. Had the party lost more crushingly in 2020, or flunked Virginia, its brave and few reformers might have had some purchase in internal debates. Instead, the Republicans who voted for Biden’s infrastructure bill this month are under siege from their own side. At the same time, Michael Flynn, a former Trump adviser, believes that America should have “one religion” (a take at some variance with that of the Founders). Another, Steve Bannon, is in contempt of Congress.

In 2021, for suburban moderates, this is so much noise. When it counts, and the party has to be more than a protest vote, Republicans might rue the failure to purge their baser elements. It is as the party of order that Republicans aim to dominate the coming era. The risk is that voters crave a civilised polity as much as a safe street.

The North Idaho Sports Commission would like to thank the City of Coeur d’Alene for supporting a successful IRONMAN 70.3. Highlights included: 539 … END_OF_DOCUMENT_TOKEN_TO_BE_REPLACED

A democracy came under attack. The United States saw a threat to an ally and also to the entire world order, but it feared that sending troops could … END_OF_DOCUMENT_TOKEN_TO_BE_REPLACED