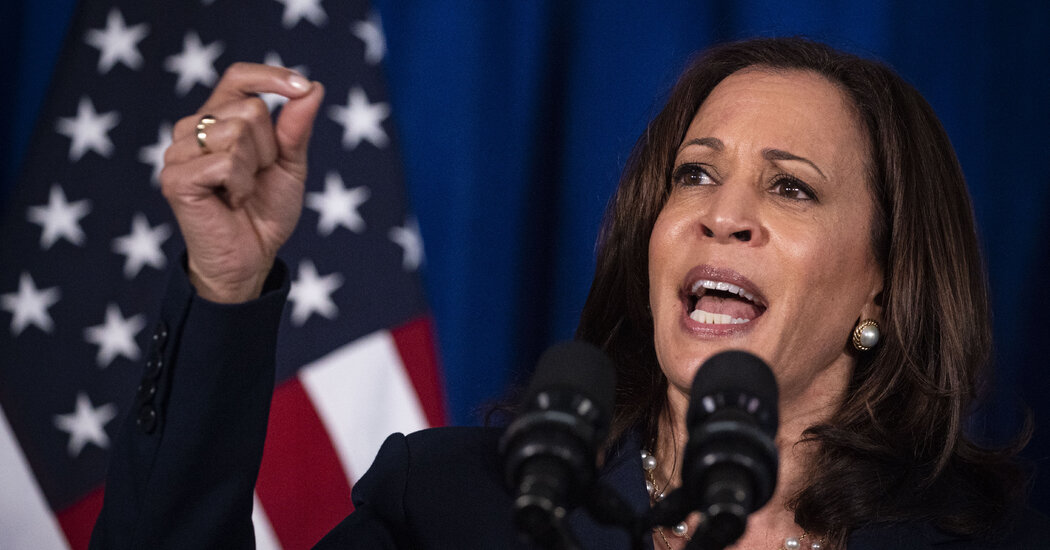 WASHINGTON — Facing an onslaught of state-level ballot restrictions and gridlock in Congress over voting rights legislation, the White House detailed a multimillion-dollar plan on Thursday to register voters and fight voter suppression.

In a speech at Howard University, Vice President Kamala Harris said the Democratic National Committee would invest $25 million in voter outreach and litigation.

“It is never too early to defend your rights,” Ms. Harris said, hours before she and President Biden met with civil rights organizations to discuss voting rights and a police overhaul at the White House.

The White House has sought to show progress on the issue even without legislation, after Republicans recently blocked the most ambitious voting rights bill to come before Congress in a generation. But the investment also underscores the dwindling chance the Biden administration and its allies have to pass sweeping legal changes expanding voting rights, and the tremendous challenge they face in battling a wave of state Republican voting laws.

Michael Waldman, the president of the Brennan Center for Justice at the New York University School of Law, said that while the engagement by the White House was encouraging, “there is no substitute for federal legislative action.”

“The Democrats are going to have to face that fact,” Mr. Waldman said. “Bottom line is, as hard as it is, as many obstacles as there are, there is no alternative to strong legislative action if we want to save voting rights in America.”

Ms. Harris, who was tapped this year to lead the administration’s efforts on voting rights, did not shy away from describing the daunting test the administration is facing. Nearly 400 bills that would restrict voting are moving forward in nearly 50 states, according to a tracker maintained by the Brennan Center for Justice — a point Ms. Harris emphasized to the crowd at Howard.

“This is designed, I believe, to make it harder for you to vote, so that you don’t vote,” Ms. Harris said.

Democrats have suffered recent defeats on the issue in the courts as well as in Congress.

Voting rights activists face an uphill road to fight laws passed by Republican-controlled legislatures that make it harder for people of color to vote after the Supreme Court upheld voting restrictions in Arizona this month. In a 6-to-3 decision, the court ruled that such legal challenges would need to prove substantial and disproportionate burdens on minority voters, a standard that suggests that courts will be unlikely to overturn many of the measures state Republicans are enacting.

That decision came days after Senate Republicans blocked the For the People Act, leaving Democrats without a clear path forward.

The legislation would have ushered in the largest federally mandated expansion of voting rights since the 1960s, ended the practice of partisan gerrymandering of congressional districts and created a new public campaign financing system. It also prompted contention among some Democrats, who privately discussed moving forward with a narrower bill to quickly provide protection for voters. Republicans had never seriously considered the larger bill, portraying it as a self-serving federalization of elections to benefit Democrats.

The Democrats’ best remaining hope to pass a bill would come from eliminating the filibuster, the 60-vote supermajority requirement in the Senate that Republicans used to block the legislation. Progressives have promised to ramp up pressure on a handful of moderate Democrats opposed to eliminating the legislative rule. But those senators — led by Senators Joe Manchin III of West Virginia and Kyrsten Sinema of Arizona — appear unlikely to budge.

“Our point of view is we’re facing a state of emergency,” said Marc H. Morial, the president and chief executive of the National Urban League, one of the community-based organizations that was represented at the White House meeting on Thursday.

The Battle Over Voting Rights

After former President Donald J. Trump returned in recent months to making false claims that the 2020 election was stolen from him, Republican lawmakers in many states have marched ahead to pass laws making it harder to vote and change how elections are run, frustrating Democrats and even some election officials in their own party.

Mr. Morial said activists raised concern over the restrictions passed by Republican-state legislatures, as well as voting changes that could win the support of Mr. Manchin. They also voiced strong opposition to a national voter identification law.

“We suggest the full weight, prestige, power of the bully pulpit of the presidency be behind this fight for democracy,” Mr. Morial said.

In the meantime, the Biden administration has turned to the Justice Department, which filed a lawsuit last month over a sweeping voting law passed by a Republican-led legislature in Georgia.

“We all know this is nothing new,” Mr. Harrison said on Thursday. “It’s the ghost of Jim Crow.”

The Wood River Valley real estate market continues to show signs of strength, despite rising interest rates and efforts by the Federal Reserve to slow … END_OF_DOCUMENT_TOKEN_TO_BE_REPLACED