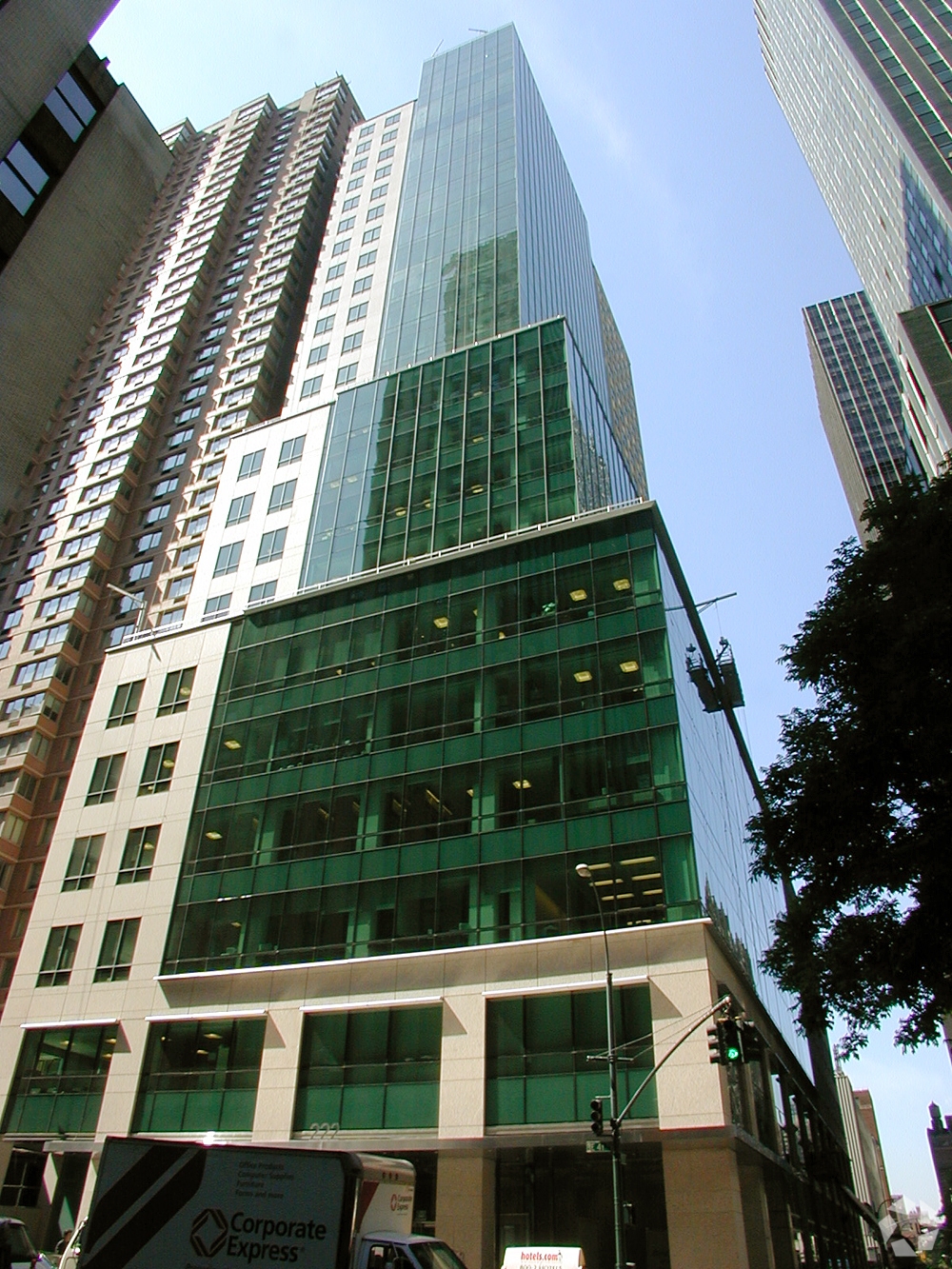 As higher interest rates spark reports of some buyers pulling back on property shopping in New York and other U.S. markets, a major German investor isn’t taking a break on scouting potential targets — including buildings in the hard-hit office sector.

Its new office is just a short walk from 100 Pearl St., a newly renovated top-tier office tower in New York’s Financial District that Commerz Real bought for more than $800 million last year in one of the city’s largest office transactions of the pandemic. And in June, Commerz Real acquired 1900 N St. NW in Washington, D.C., making its debut in the U.S. capital. CoStar data shows brokerage giant CBRE is the largest tenant in the building.

The U.S. market “was always on the radar” for Commerz Real, Timo Lutz, head of fund management, said in an interview. Lutz said the firm first invested in the U.S. as far back as 2004 before reentering the market in 2014. But “you have to find the right product.”

The United States is a “safe haven for a lot of European investors,” especially in light of Russia’s invasion of Ukraine and other market concerns, Lutz said. He added that Commerz Real still has plans to add to its U.S. portfolio and “have a big footprint.” Visiting New York from Germany for the firm’s U.S. office opening, Lutz’s itinerary also included visiting six or seven office and residential properties in one day in midtown Manhattan and Brooklyn, he told CoStar News.

Commerz Real, through its open-ended real estate fund Hausinvest, owns a total of 12 properties valued at about $3.2 billion in gateway cities in the United States that it has bought since 2014, with six offices valued at $2.1 billion. The office portfolio includes The National in Chicago’s Loop central business district and Facebook-occupied Dexter Station in Seattle.

In New York, where the fund has most of its U.S. properties, Commerz Real owns 222 E. 41st St. near Grand Central Terminal in Midtown, where CoStar data shows the NYU Langone Health system occupies more than 385,000 square feet in the building on lease through October 2046.

Its four U.S. hotels that are valued at $914 million include the 11 Howard in New York’s SoHo neighborhood; the Kimpton Hotel Monaco in Philadelphia; the Kimpton Everly hotel in Los Angeles; and Alohilani Resort Waikiki Beach in Honolulu.

Its two shopping malls valued at about $158 million include 800 Lincoln Road in Miami Beach, Florida, where CoStar data shows tenants include Lululemon and Skechers.

While smaller Sun Belt markets are in demand for many other investors, it’s not a consideration yet for Commerz Real.

“It’s a matter of ‘is it a market where there’s a lot liquidity’ and buyers and sellers,” Lutz said. “That really attracts us to gateway cities. For us it’s a matter of location.” He added that, with the right location and quality, “there’ll always be demands.”

Commerz Real isn’t the only overseas buyer looking hard at U.S. market. Foreign investors had been net buyers every year for the past 14 years going back to the end of the Great Recession, with that pattern expected to continue this year, according to the annual International Investor Survey published earlier this year by the Association of Foreign Investors in Real Estate.

Last year, U.S. property sales where the buyer origin is listed as foreign reached $79.3 billion, the highest level in at least five years, about double the $40 billion in 2020 and also exceeding the pre-pandemic level of about $55 billion in 2019, according to CoStar data.

It remains to be seen whether last year’s record pace will continue. In the first half of this year, U.S. foreign buyer transactions, while topping 2021’s first-half level, was less than half of 2021’s total at just about $28 billion, CoStar data shows.

The association also said in a separate report in June that investors should be “cautious proceeding in a post-COVID era” when it comes to office investments.

“Unlike in Europe and the U.K., the U.S. had an oversupply of commodity space facing functional obsolescence even before the pandemic,” the association said. “Investing in office in the current market environment will likely require a higher degree of precision than during prior cycles.”

As higher interest rates have raised borrowing costs and deterred some would-be buyers, that isn’t as big of a concern to Commerz Real because the investment firm has “daily cash flow” and is a “strong equity buyer,” Lutz said. As the euro has declined and is near parity with the dollar, Commerz Real employs currency “hedging” and forecast strategy to limit its risks, he said.

“The biggest concern is the whole crisis in Ukraine and Russia” and the impact on energy supplies, he said.

For instance, before the invasion by Russia, Commerz Real was interested in buying property in Eastern Europe, he said. But it’s shifting instead to investing in other European countries including France and Spain “that are less affected by the energy crisis.”

Including the U.S. properties, the Hausinvest fund’s equivalent of about $17 billion in real estate assets consists of a total of 153 properties across various property types in 58 cities and 18 countries, including Commerz Real’s home country of Germany, the United Kingdom, Ireland, Spain, Japan and Australia.

The fund is flush with about $2.3 billion in cash. It’s considering buying opportunities to reenter Canada as well as looking in Asia, Lutz said. Commerz Real has about $35 billion in assets under management in total. 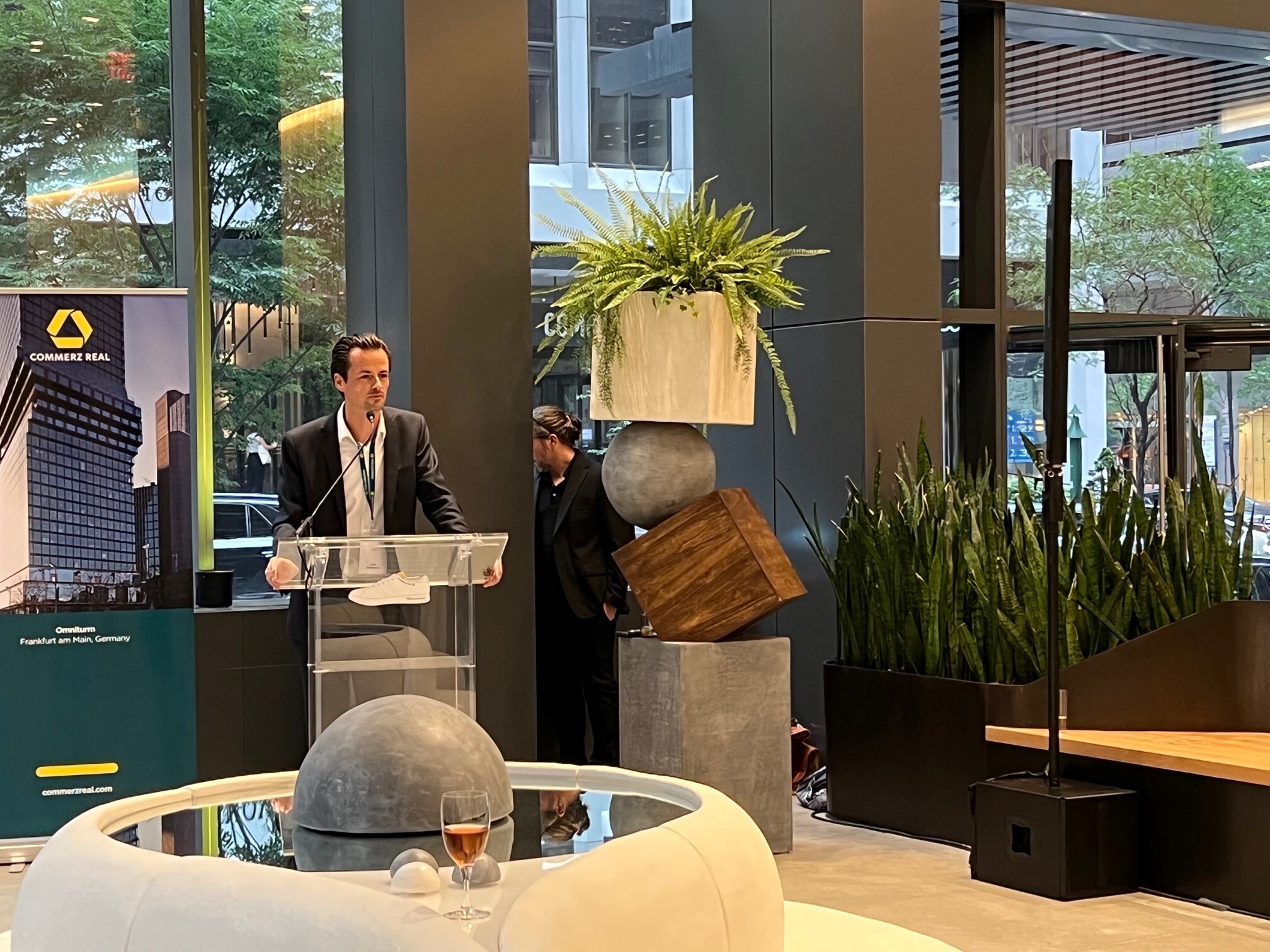 For instance, the number of companies, including Boeing, that have relocated to the D.C. area supports Commerz Real’s rationale to enter that market, he said. As rents have jumped to record highs in cities such as New York, the firm is also interested in making its first U.S. residential purchase to add to Hausinvest’s growing portfolio.

But office, the biggest chunk of its property investment both in the United States and globally, remains a key focus.

“We still believe in the concept of office,” Böhnlein said. “It’s important you see your colleagues. People can sit together in the food court. We are human beings. It’s not something that’s going to stop.”

As a case in point, even with hybrid work schedules now in vogue, Commerz Real hasn’t seen any of its office tenants seeking to reduce their footprint, Böhnlein said.

“We did a lot of lease negotiations and extensions” during the pandemic, he said. “There was really an opportunity for companies to reduce footprint, but [there was] not such a discussion. [Tenants] were just opting for the same footprint.”

The so-called flight-to-quality trend of tenants seeking top-tier space in a prime location — with standout amenities, easy transit access and a short commute to the office — has emerged as a common theme in its discussions with tenants. Like many other well-resourced buyers, Commerz Real is shopping top-tier Class A properties and may consider Class B and Class C properties that make sense for redevelopment and conversion with a partner.

“The concept of office works for high-quality assets,” Böhnlein said.

While there’s no “black and white answer” yet regarding the future of the office in its global markets, Böhnlein said the U.S. practice of tracking the return-to-office pace was something that wasn’t commonly seen in Europe.

Thanks in part to many workers typically having shorter commutes or living within walking distance of their offices in Europe, the office utilization rate in Europe is generally higher, making going to the office less of an issue, the two Commerz Real executives said.

They pointed to the example of many young office workers in Europe having the option of working at home but also desiring to be in the office at times.

“Home office is maybe more attractive” to some in New York because people are commuting one hour to two hours, Lutz said. His own commute is about half an hour in contrast and is already longer than that of many of his colleagues back home. In Germany, “a lot of [my] colleagues have an easy commute to the office.”

Less than half of U.S. workers have returned to the office more than two years into the pandemic, according to Kastle Systems’ keycard access swipe data. Office leasing volume in markets such as New York, while having improved from the worst during the pandemic, remains below pre-COVID levels.

Meanwhile, the reported pullback on some office expansion in Manhattan, including recent decisions by Facebook parent Meta and e-commerce giant Amazon, could hurt the market’s recovery. 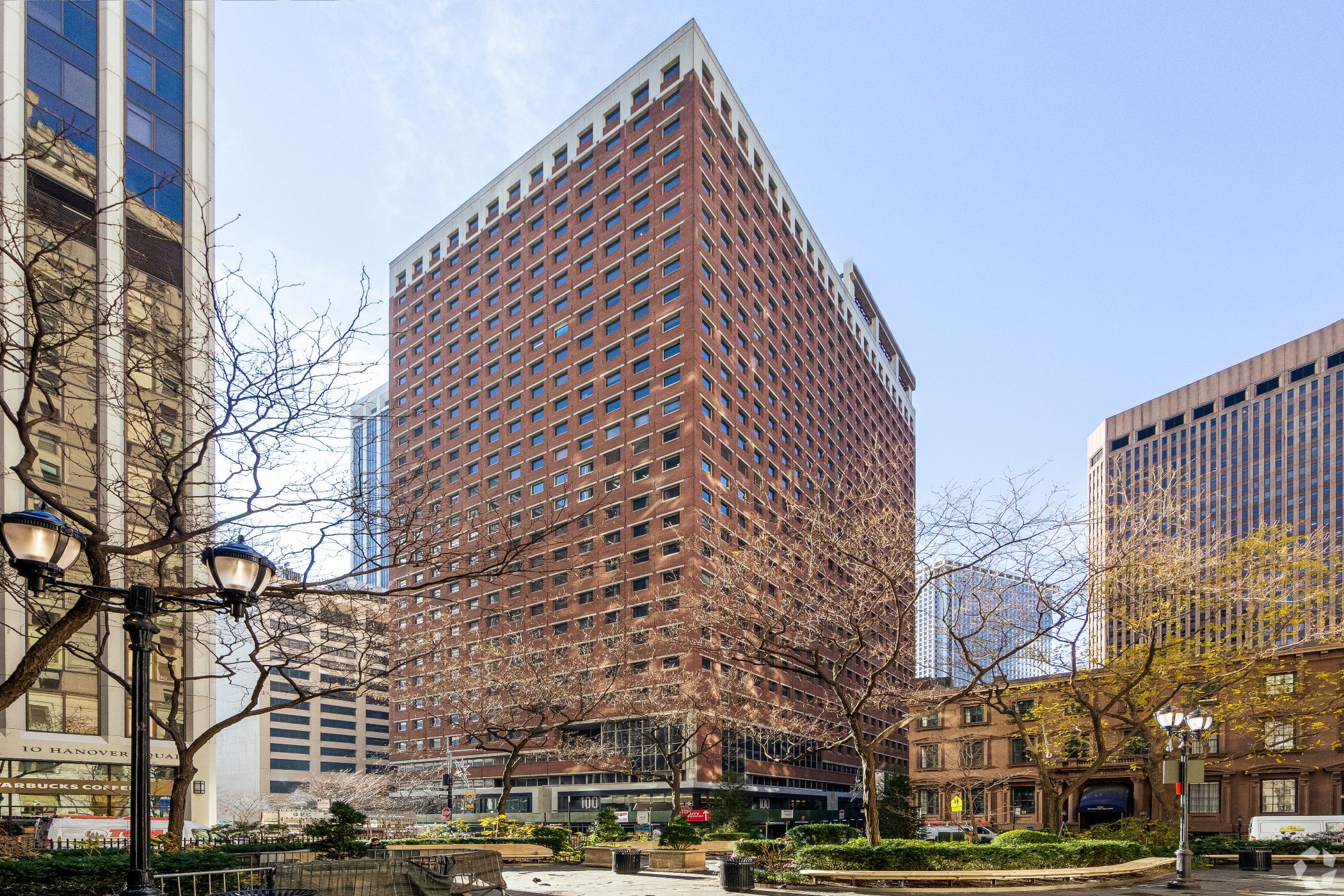 The office vacancy rate in the New York market where Commerz Real’s 100 Pearl St. is located has reached a record high. (CoStar)

In the Financial District in lower Manhattan, where 100 Pearl St. sits, CoStar data shows the office vacancy rate has surged to a record high of 18.5%, far above the city average of about 12%.

But Lutz isn’t fazed. The Pearl Street property, he said, has an average lease term of 20 years and is “fully leased” with a “positive return.” NYC Health+Hospitals and the Securities and Exchange Commission are the building’s two largest tenants taking up a total of more than 750,000 square feet, according to CoStar data.

“We have 20 years to go” on that lease even if there’s suddenly too much office supply in the market,” he told CoStar. “If it didn’t provide a positive return, we wouldn’t buy. … We still believe in New York.”

Artist concept of the Orion capsule in lunar orbit. BioExperiment-01 (BioExpt-01) will serve as a pathfinder for biological research beyond LEO, with … END_OF_DOCUMENT_TOKEN_TO_BE_REPLACED

Editorial IndependenceWe want to help you make more informed decisions. Some links on this page — clearly marked — may take you to a partner website … END_OF_DOCUMENT_TOKEN_TO_BE_REPLACED

Investors have remained skeptical as the main indices declined this year. The NASDAQ Composite tumbled close to 20 per cent in 2o22, and the S&P 500 … END_OF_DOCUMENT_TOKEN_TO_BE_REPLACED